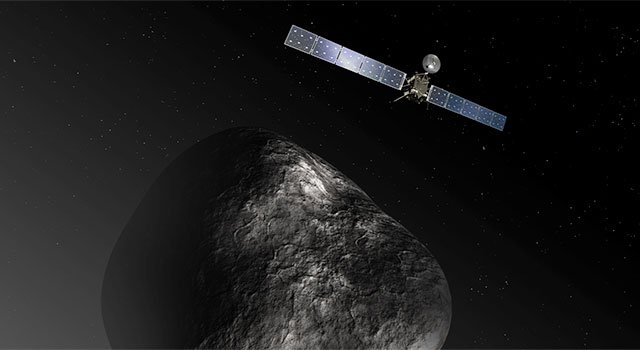 A NASA instrument aboard the European Space Agency's Rosetta orbiter has successfully made its first delivery of science data from comet 67P/Churyumov-Gerasimenko.

A NASA instrument aboard the European Space Agency's (ESA's) Rosetta orbiter has successfully made its first delivery of science data from comet 67P/Churyumov-Gerasimenko.

The instrument, named Alice, began mapping the comet's surface last month, recording the first far-ultraviolet light spectra of the comet's surface. From the data, the Alice team discovered the comet is unusually dark -- darker than charcoal-black -- when viewed in ultraviolet wavelengths. Alice also detected both hydrogen and oxygen in the comet's coma, or atmosphere.

"We're a bit surprised at just how unreflective the comet's surface is and how little evidence of exposed water-ice it shows," said Alan Stern, Alice principal investigator at the Southwest Research Institute in Boulder, Colorado.

Alice is probing the origin, composition and workings of comet 67P/Churyumov-Gerasimenko, to gather sensitive, high-resolution insights that cannot be obtained by either ground-based or Earth-orbiting observation. It has more than 1,000 times the data-gathering capability of instruments flown a generation ago, yet it weighs less than nine pounds (four kilograms) and draws just four watts of power. The instrument is one of two full instruments on board Rosetta that are funded by NASA. The agency also provided portions of two other instrument suites.

Other U.S. contributions aboard the spacecraft are the Microwave Instrument for Rosetta Orbiter (MIRO), the Ion and Electron Sensor (IES), part of the Rosetta Plasma Consortium Suite, and the Double Focusing Mass Spectrometer (DFMS) electronics package for the Rosetta Orbiter Spectrometer for Ion Neutral Analysis (ROSINA). They are part of a suite of 11 total science instruments aboard Rosetta.

MIRO is designed to provide data on how gas and dust leave the surface of the nucleus to form the coma and tail that gives comets their intrinsic beauty. IES is part of a suite of five instruments to analyze the plasma environment of the comet, particularly the coma.

To obtain the orbital velocity necessary to reach its comet target, the Rosetta spacecraft took advantage of four gravity assists (three from Earth, one from Mars) and an almost three-year period of deep space hibernation, waking up in January 2014 in time to prepare for its rendezvous with 67P/Churyumov-Gerasimenko.

Rosetta also carries a lander, Philae, which will drop to the comet's surface in November 2014.