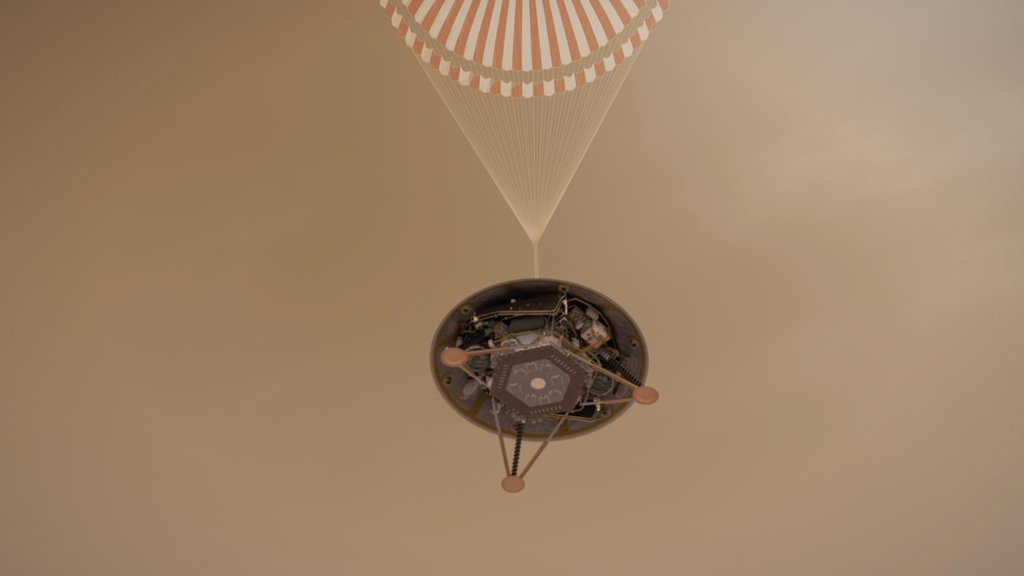 This illustration shows a simulated view of NASA's InSight lander descending on its parachute toward the surface of Mars.› Full image and caption
Credit: NASA/JPL-Caltech

On Nov. 26, NASA's InSight spacecraft will blaze through the Martian atmosphere and set a lander gently on the surface in less time than it takes to cook a hard-boiled egg.

On Nov. 26, NASA's InSight spacecraft will blaze through the Martian atmosphere and attempt to set a lander gently on the surface of the Red Planet in less time than it takes to hard-boil an egg. InSight's entry, descent and landing (EDL) team, based at NASA's Jet Propulsion Laboratory in Pasadena, California, along with another part of the team at Lockheed Martin Space in Denver, have pre-programmed the spacecraft to perform a specific sequence of activities to make this possible.

The following is a list of expected milestones for the spacecraft, assuming all proceeds exactly as planned and engineers make no final changes the morning of landing day. Some milestones will be known quickly only if the experimental Mars Cube One (MarCO) spacecraft are providing a reliable communications relay from InSight back to Earth. The primary communications path for InSight engineering data during the landing process is through NASA's Mars Reconnaissance Orbiter and Mars Odyssey. Those data are expected to become available several hours after landing.

If all goes well, MarCO may take a few seconds to receive and format the data before sending it back to Earth at the speed of light. The one-way time for a signal to reach Earth from Mars is eight minutes and seven seconds on Nov. 26. Times listed below are in Earth Receive Time, or the time JPL Mission Control may receive the signals relating to these activities.

For the latest updates on InSight's status, visit:

The InSight press kit, with additional information about the mission time line, is available at:

InSight's success does not depend on MarCO being able to relay communications. Additional information about how InSight will communicate during entry, descent and landing is available here. JPL, a division of the California Institute of Technology in Pasadena, manages MarCO for NASA's Science Mission Directorate in Washington.