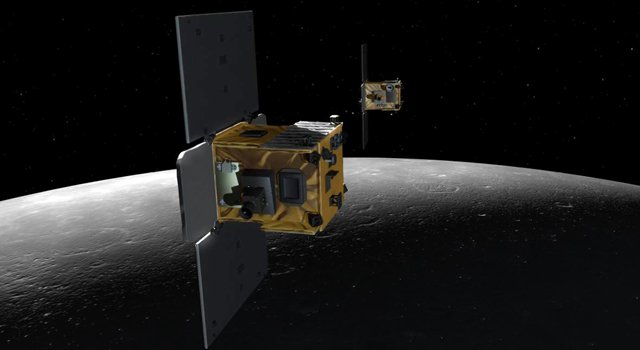 An artist's depiction of the GRAIL twins (Ebb and Flow) in lunar orbit. During GRAIL's prime mission science phase, the two spacecraft will orbit the moon as high as 31 miles (51 kilometers) and as low as 10 miles (16 kilometers).› Full image and caption
Credit: NASA/Caltech-JPL/MIT

Engineers at NASA's Jet Propulsion Laboratory have received confirmation that the twin GRAIL spacecraft have completed their planned impact into the moon.

Engineers at NASA's Jet Propulsion Laboratory in Pasadena, Calif., have received confirmation that the twin GRAIL spacecraft have, as planned, completed their impact into the moon.

NASA is providing live commentary of the pre-planned lunar surface impacts by GRAIL beginning at 2 p.m. PST (5 p.m. EST) Monday, Dec. 17. The event will be broadcast on NASA Television and streamed on the agency's website. For NASA TV streaming video, schedule and downlink information, visit: http://www.nasa.gov/ntv . The coverage will also be streamed live on Ustream at: http://www.ustream.tv/nasajpl2 .

The two probes will hit a mountain near the lunar north pole, bringing their successful prime and extended science missions to an end. The two probes are being sent purposely into the moon because they no longer have enough altitude or fuel to continue science operations.

Commentary will originate from the GRAIL control room at NASA's Jet Propulsion Laboratory in Pasadena, Calif. Coverage will last about 35 minutes and include live interviews with GRAIL team members. GRAIL's final resting place on the moon will be in shadow at the time of impact, so no video documentation of the impacts is expected. GRAIL data are allowing scientists to learn about the moon's internal structure and composition in unprecedented detail.

Join the conversation on Twitter by following the hashtag #GRAIL.