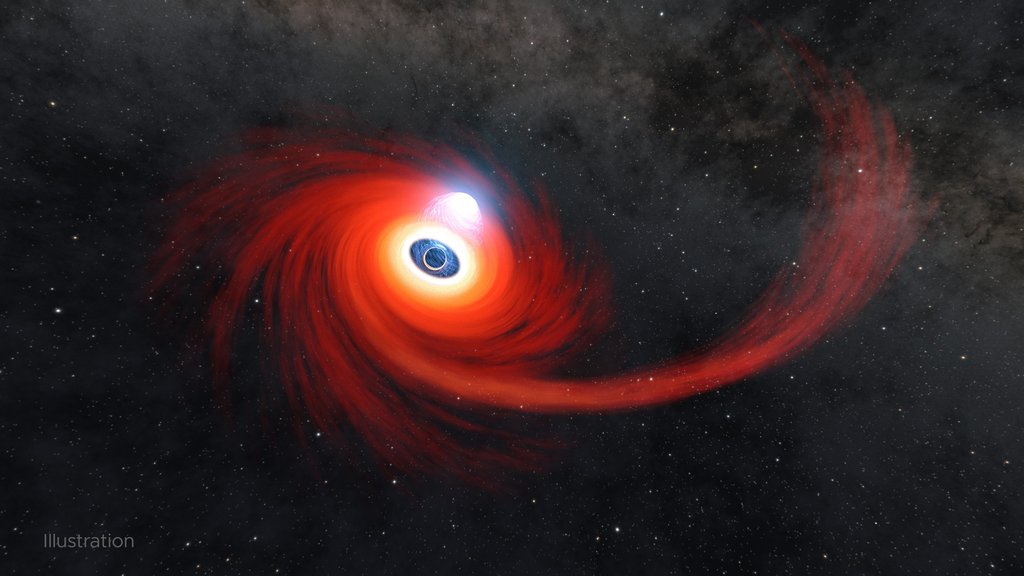 A disk of hot gas swirls around a black hole in this illustration. The stream of gas stretching to the right is what remains of a star that was pulled apart by the black hole. A cloud of hot plasma (gas atoms with their electrons stripped away) above the black hole is known as a corona. Credit: NASA/JPL-Caltech Full Image Details

Multiple NASA telescopes recently observed a massive black hole tearing apart an unlucky star that wandered too close. Located about 250 million light-years from Earth in the center of another galaxy, it was the fifth-closest example of a black hole destroying a star ever observed.

Once the star had been thoroughly ruptured by the black hole’s gravity, astronomers saw a dramatic rise in high-energy X-ray light around the black hole. This indicated that as the stellar material was pulled toward its doom, it formed an extremely hot structure above the black hole called a corona. NASA’s NuSTAR (Nuclear Spectroscopic Telescopic Array) satellite is the most sensitive space telescope capable of observing these wavelengths of light, and the event’s proximity provided an unprecedented view of the corona’s formation and evolution, according to a new study published in the Astrophysical Journal.

The work demonstrates how the destruction of a star by a black hole – a process formally known as a tidal disruption event – could be used to better understand what happens to material that’s captured by one of these behemoths before it’s fully devoured.

When a star wanders too close to a black hole, the intense gravity will stretch the star out until it becomes a long river of hot gas, as shown in this animation. The gas is then whipped around the black hole and is gradually pulled into orbit, forming a bright disk.

Most black holes that scientists can study are surrounded by hot gas that has accumulated over many years, sometimes millennia, and formed disks billions of miles wide. In some cases, these disks shine brighter than entire galaxies. Even around these bright sources, but especially around much less active black holes, a single star being torn apart and consumed stands out. And from start to finish, the process often takes only a matter of weeks or months. The observability and short duration of tidal disruption events make them especially attractive to astronomers, who can tease apart how the black hole’s gravity manipulates the material around it, creating incredible light shows and new physical features.

“Tidal disruption events are a sort of cosmic laboratory,” said study co-author Suvi Gezari, an astronomer at the Space Telescope Science Institute in Baltimore. “They’re our window into the real-time feeding of a massive black hole lurking in the center of a galaxy.”

The focus of the new study is an event called AT2021ehb, which took place in a galaxy with a central black hole about 10 million times the mass of our Sun (about the difference between a bowling ball and the Titanic). During this tidal disruption event, the side of the star nearest the black hole was pulled harder than the far side of the star, stretching the entire thing apart and leaving nothing but a long noodle of hot gas.

Scientists think that the stream of gas gets whipped around a black hole during such events, colliding with itself. This is thought to create shock waves and outward flows of gas that generate visible light, as well as wavelengths not visible to the human eye, such as ultraviolet light and X-rays. The material then starts to settle into a disk rotating around the black hole like water circling a drain, with friction generating low-energy X-rays. In the case of AT2021ehb, this series of events took place over just 100 days.

The event was first spotted on March 1, 2021, by the Zwicky Transient Facility (ZTF), located at the Palomar Observatory in Southern California. It was subsequently studied by NASA’s Neil Gehrels Swift Observatory and Neutron star Interior Composition Explorer (NICER) telescope (which observes longer X-ray wavelengths than Swift).

Then, around 300 days after the event was first spotted, NASA’s NuSTAR began observing the system. Scientists were surprised when NuSTAR detected a corona – a cloud of hot plasma, or gas atoms with their electrons stripped away – since coronae usually appear with jets of gas that flow in opposite directions from a black hole. However, with the AT2021ehb tidal event, there were no jets, which made the corona observation unexpected. Coronae emit higher-energy X-rays than any other part of a black hole, but scientists don’t know where the plasma comes from or exactly how it gets so hot.

“We’ve never seen a tidal disruption event with X-ray emission like this without a jet present, and that’s really spectacular because it means we can potentially disentangle what causes jets and what causes coronae,” said Yuhan Yao, a graduate student at Caltech in Pasadena, California, and lead author of the new study. “Our observations of AT2021ehb are in agreement with the idea that magnetic fields have something to do with how the corona forms, and we want to know what’s causing that magnetic field to get so strong.”

Yao is also leading an effort to look for more tidal disruption events identified by ZTF and to then observe them with telescopes like Swift, NICER, and NuSTAR. Each new observation offers the potential for new insights or opportunities to confirm what has been observed in AT2021ehb and other tidal disruption events. “We want to find as many as we can,” Yao said.

A Small Explorer mission led by Caltech and managed by NASA’s Jet Propulsion Laboratory in Southern California for the agency’s Science Mission Directorate in Washington, NuSTAR was developed in partnership with the Danish Technical University and the Italian Space Agency (ASI). The spacecraft was built by Orbital Sciences Corp. in Dulles, Virginia. NuSTAR’s mission operations center is at the University of California, Berkeley, and the official data archive is at NASA’s High Energy Astrophysics Science Archive Research Center at NASA’s Goddard Space Flight Center. ASI provides the mission’s ground station and a mirror data archive. Caltech manages JPL for NASA.

For more information about the NuSTAR mission, visit: