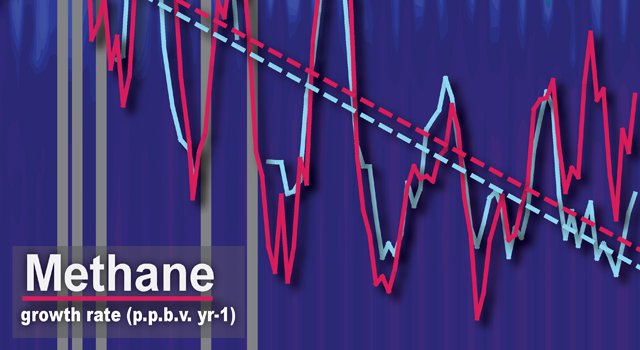 A new NASA-funded study has largely accounted for the dramatic leveling-off in atmospheric methane levels seen at the end of the 20th century.

Atmospheric methane is 20 times more potent as a greenhouse gas than carbon dioxide, but is present in Earth's atmosphere at much lower levels. Because of its large potential impact on climate change, scientists closely monitor its levels. Global levels of methane increased for decades in the 20th century as a result of worldwide industrial and agricultural activity. Then, from the 1980s through 2005, they leveled off, leaving scientists scratching their heads for a cause. Now, a new NASA-funded study by a UC Irvine-led science team appears to have accounted for most of the dramatic tapering-off during this period.

In results published Aug. 23 in the journal Nature, the team led by UC Irvine chemistry professor Donald Blake reported that the observed leveling-off in atmospheric methane is largely a result of changes in fossil fuel use - specifically, reductions in fugitive emissions of natural gas that can occur during fossil fuel exploration. Fugitive emissions include venting and flaring, evaporative losses, and equipment leaks and failures, but exclude combustion of fuels. The study finds these measures probably account for up to 70 percent of the slowing growth in atmospheric methane levels observed at the end of the 20th century.

Blake and his team, including co-author Mads Sulbaek Andersen, formerly of UCI and now with NASA's Jet Propulsion Laboratory in Pasadena, Calif., used nearly three decades of air samples of methane and ethane collected at remote locations across the globe for their analysis. Ethane is the most abundant non-methane hydrocarbon in Earth's atmosphere, and shares its major emission sources with methane. Because methane and ethane are emitted from fossil fuel sources with characteristic emission ratios, the scientists were able to use their long-term ethane records to investigate quantitatively the slowing growth rate of atmospheric methane.

The scientists found that the long-term decline in the global concentration of atmospheric ethane has closely matched the long-term decline of the global growth rate of atmospheric methane. This association shows that reductions in fossil fuel sources are responsible for a significant portion of methane's long-term decline. Close scrutiny of their data shows that the major factor was most likely the trapping of natural gas for use as a fuel source, sharply reducing the common practice of skyward venting and flaring of the methane from oil fields. Methane is the main ingredient in natural gas.

"It used to just be burned off as a waste product," said UC Irvine research associate and co-author Isobel Simpson. "The reason this is important is because methane is a potent greenhouse gas, second in importance only to carbon dioxide. We can't make real progress on climate change without tackling carbon dioxide, but bringing methane under control would certainly help."

Many researchers have tried to determine what prompted the declining trend in methane growth during the late 20th century. Last summer, a pair of papers in the journal Nature offered different causes: less natural gas from oil fields in one case and changing fertilizer and water practices in rice paddies in the other. Blake said his group had confirmed - using comprehensive global measurements - that the former was probably the major cause.

While these studies appear to have answered one part of the riddle, levels have started to climb again since 2007, prompting additional questions for scientists in this ongoing field of research.

"This paper speaks to the importance of scientific insight that only can be gained from decades of meticulous, sustained data recording," said Sulbaek Andersen. "The extent of this long-term record is quite unique. It has required the continuous, systematic work of researchers and students over a time span of almost 30 years."

Other organizations participating in the study included the National Oceanic and Atmospheric Administration and the University of Colorado.