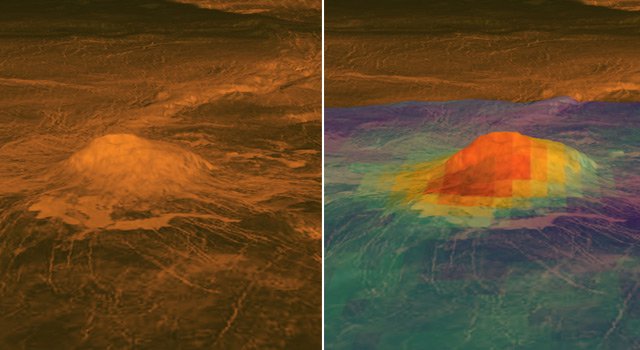 For the first time, scientists have detected clear signs of recent lava flows on the surface of Venus.

PASADENA, Calif. -- For the first time, scientists have detected clear signs of recent lava flows on the surface of Venus.

The observations reveal that volcanoes on Venus appeared to erupt between a few hundred years to 2.5 million years ago. This suggests the planet may still be geologically active, making Venus one of the few worlds in our solar system that has been volcanically active within the last 3 million years.

The evidence comes from the European Space Agency's Venus Express mission, which has been in orbit around the planet since April 2006. The science results were laid over topographic data from NASA's Magellan spacecraft. Magellan radar-mapped 98 percent of the surface and collected high-resolution gravity data while orbiting Venus from 1990 to 1994.

Scientists see compositional differences compared to the surrounding landscape in three volcanic regions. Relatively young lava flows have been identified by the way they emit infrared radiation. These observations suggest Venus is still capable of volcanic eruptions. The findings appear in the April 8 edition of the journal Science.

"The geological history of Venus has long been a mystery," said Sue Smrekar, a scientist at NASA's Jet Propulsion Laboratory in Pasadena, Calif., and lead author of the paper describing the work. "Previous spacecraft gave us hints of volcanic activity, but we didn't know how long ago that occurred. Now we have strong evidence right at the surface for recent eruptions."

The volcanic provinces, or hotspots, on which Smrekar and her team focused are geologically similar to Hawaii. Scientists previously detected plumes of hot rising material deep under Venus' surface. Those plumes are thought to have produced significant volcanic eruptions. Other data from the planet suggest that volatile gases commonly spewed from volcanoes were breaking down in its atmosphere. The rate of volcanism will help scientists determine how the interior of the planet works and how gases emitted during eruptions affect climate.

Something is smoothing Venus' surface, because the planet has only about 1,000 craters, a relatively small amount compared to other bodies in our solar system. Scientists think it may be the result of volcanic activity and want to know if it happens quickly or slowly. The Venus Express results suggest a gradual sequence of smaller volcanic eruptions as opposed to a cataclysmic volcanic episode that resurfaces the entire planet with lava.

Smrekar and her team also discovered that several volcanic features in the regions they studied show evidence of minerals found in recent lava flows. These mineral processes correspond to the youngest volcanic flows in each region, giving scientists additional support for the idea they formed during recent volcanic activity. On Earth, lava flows react rapidly with oxygen and other elements in the atmosphere when they erupt to the surface. On Venus, the process is similar, although it is more intense and changes the outer layer more substantially.

Scientists call Venus Earth's sister planet because of similarities in size, mass, density and volume. Scientists deduce that both planets shared a common origin, forming at the same time about 4.5 billion years ago. Venus also is the planet on which the runaway greenhouse effect was discovered. The planet is cloaked in a much less friendly atmosphere than that found on Earth. It is composed chiefly of carbon dioxide, which generates a surface temperature hot enough to melt lead, and a surface pressure 90 times greater than that on Earth.

The small group of worlds in our solar system known to be volcanically active today includes Earth and Jupiter's moon Io. Crater counts on Mars also have suggested recent lava flows. Scientists are studying evidence of another kind of active volcanism that involves ice-spewing volcanoes on other moons in our solar system.

NASA sponsored Smrekar's research. The European Space Agency built and manages Venus Express. JPL is managed for NASA by the California Institute of Technology in Pasadena.

To view the spacecraft data and images, visit: http://www.nasa.gov/topics/solarsystem/features/pia13001.html