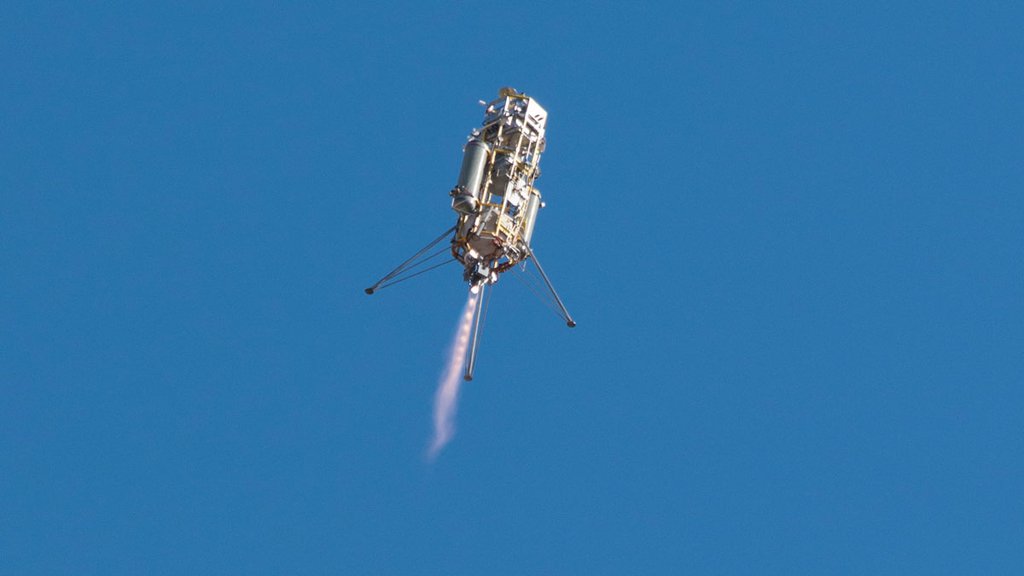 A prototype of the Lander Vision System for NASA's Mars 2020 mission was tested in this Dec. 9, 2014, flight of a Masten Space Systems "Xombie" vehicle at Mojave Air and Space Port in California.› Full image and caption
Credit: NASA Photo/Tom Tschida 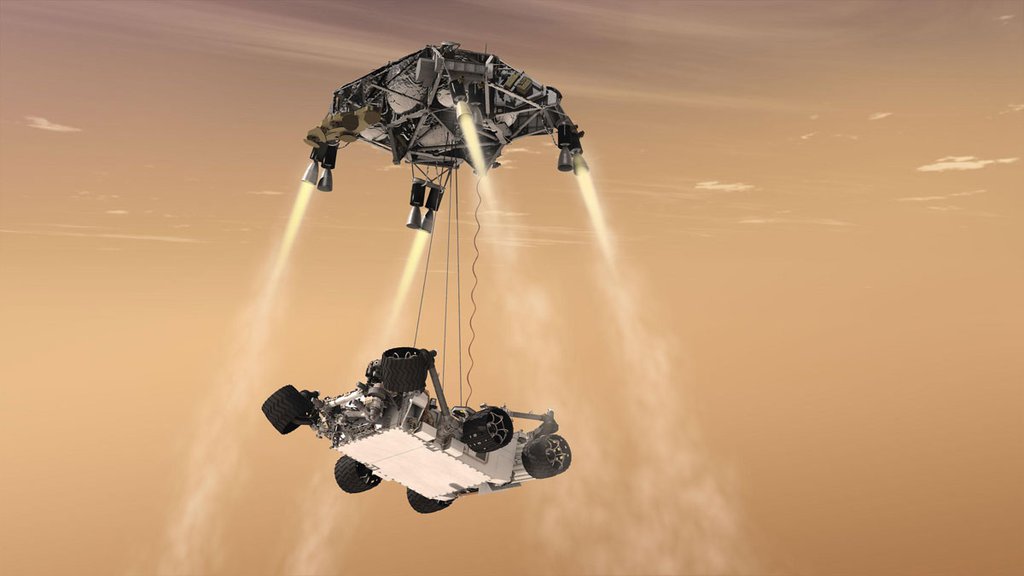 NASA's Mars 2020 rover will use a landing system nearly identical to the 2012 landing of Curiosity (depicted in this artist's concept) but with added precision from the Lander Vision System.› Full image and caption
Credit: NASA/JPL-Caltech

NASA tested new "eyes" for its next Mars rover mission on a rocket built by Masten Space Systems in Mojave, California, thanks in part to NASA's Flight Opportunities Program.

NASA tested new "eyes" for its next Mars rover mission on a rocket built by Masten Space Systems in Mojave, California, thanks in part to NASA's Flight Opportunities Program, or FOP.

The agency's Jet Propulsion Laboratory in Pasadena, California, is leading development of the Mars 2020 rover and its Lander Vision System, or LVS. In 2014, the prototype vision system launched 1,066 feet (325 meters) into the air aboard Masten's rocket-powered "Xombie" test platform and helped guide the rocket to a precise landing at a predesignated target. LVS flew as part of a larger system of experimental landing technologies called the Autonomous Descent and Ascent Powered-flight Testbed, or ADAPT.

LVS, a camera-based navigation system, photographs the terrain beneath a descending spacecraft and matches it with onboard maps allowing the craft to detect its location relative to landing hazards, such as boulders and outcroppings.

The system can then direct the craft toward a safe landing at its primary target site or divert touchdown toward better terrain if there are hazards in the approaching target area. Image matching is aided by an inertial measurement unit that monitors orientation.

"By providing funding for flight tests, FOP motivated us to build guidance, navigation and control payloads for testing on Xombie," Johnson said. "In the end we showed a closed loop pinpoint landing demo that eliminated any technical concerns with flying the Lander Vision System on Mars 2020."

According to "Lander Vision System for Safe and Precise Entry Descent and Landing," a 2012 abstract co-authored by Johnson for a Mars exploration workshop, LVS enables a broad range of potential landing sites for Mars missions.

Typically, Mars landers have lacked the ability to analyze and react to hazards, the abstract says. To avoid hazards, mission planners selected wide-open landing sites with mostly flat terrain. As a result, landers and rovers were limited to areas with relatively limited geological features, and were unable to access many sites of high scientific interest with more complex and hazardous surface morphology. LVS will enable safe landing at these scientifically compelling Mars landing sites.

An LVS-equipped mission allows for opportunities to land within more challenging environments and pursue new discoveries about Mars. With LVS baselined for inclusion on Mars 2020, the researchers are now focused on building the flight system ahead of its eventual role on the Red Planet.