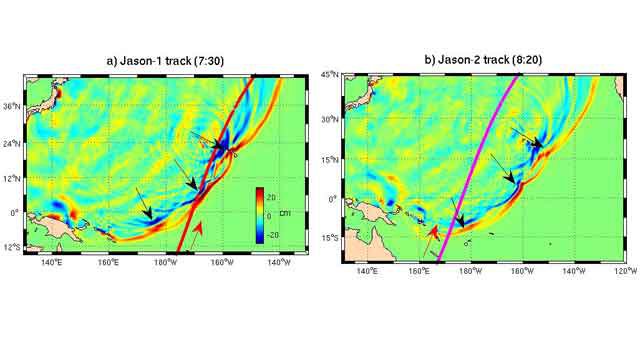 NASA satellite altimeter data on the major and destructive tsunami generated by the March 11, 2011 magnitude 9.0 Tohoku-Oki earthquake off Japan's northeastern coast were used to confirm the existence of long-hypothesized "merging tsunamis" capable of traveling long distances without losing power. The NASA/French Space Agency Jason-1 satellite (left) passed over the tsunami 7 hours and 30 minutes after the earthquake and was able to 'see' a large wave resulting from merging tsunami jets. The NASA/European Jason-2 satellite (right) passed over the region 8 hours and 20 minutes after the earthquake and observed the normal tsunami wave.› Full image and caption
Credit: NASA/JPL-Caltech | |

NASA and university researchers have discovered the tsunami generated by the magnitude 9.0 quake off northeastern Japan in March 2011 was a long-hypothesized "merging tsunami"

PASADENA, Calif. - NASA and Ohio State University researchers have discovered the major tsunami generated by the March 2011 Tohoku-Oki quake centered off northeastern Japan was a long-hypothesized "merging tsunami."  The tsunami doubled in intensity over rugged ocean ridges, amplifying its destructive power at landfall.

Data from NASA and European radar satellites captured at least two wave fronts that day. The fronts merged to form a single, double-high wave far out at sea. This wave was capable of traveling long distances without losing power. Ocean ridges and undersea mountain chains pushed the waves together along certain directions from the tsunami's origin.

The discovery helps explain how tsunamis can cross ocean basins to cause massive destruction at some locations while leaving others unscathed. The data raise hope that scientists may be able to improve tsunami forecasts.

Research scientist Y. Tony Song of NASA's Jet Propulsion Laboratory in Pasadena, Calif., and professor C.K. Shum of The Ohio State University, Columbus, discussed the data and simulations that enabled them to piece the story together at a media briefing Monday, Dec. 5, at the American Geophysical Union meeting in San Francisco.

"It was a one in 10 million chance that we were able to observe this double wave with satellites," Song said. He is the principal investigator in the NASA-funded study.

"Researchers have suspected for decades that such 'merging tsunamis' might have been responsible for the 1960 Chilean tsunami that killed about 200 people in Japan and Hawaii, but nobody had definitively observed a merging tsunami until now," Song said. "It was like looking for a ghost. A NASA-French Space Agency satellite altimeter happened to be in the right place at the right time to capture the double wave and verify its existence."

The NASA-Centre National d'Etudes Spaciales Jason-1 satellite passed over the tsunami on March 11, as did two other satellites: the NASA-European Jason-2 and the European Space Agency's EnviSAT.  All three satellites carry radar altimeters, which measure sea level changes to an accuracy of a few centimeters. Each satellite crossed the tsunami at a different location, measuring the wave fronts as they occurred. Jason-1 launched 10 years ago this week on Dec. 7, 2001.

"We can use what we learned to make better forecasts of tsunami danger in specific coastal regions anywhere in the world, depending on the location and the mechanism of an undersea quake," Shum said.

The researchers think ridges and undersea mountain chains on the ocean floor deflected parts of the initial tsunami wave away from each other to form independent jets shooting off in different directions, each with its own wave front.

The sea-floor topography nudges tsunami waves in varying directions and can make its destruction appear random. For that reason, hazard maps that try to predict where tsunamis will strike rely on sub-sea topography. Previously, these maps considered only topography near a particular shoreline. This study suggests scientists may be able to create maps that take into account all undersea topography, even sub-sea ridges and mountains far from shore.

Song and his team were able to verify the satellite data through model simulations based on independent data, including GPS data from Japan and buoy data from the National Oceanic and Atmospheric Administration's Deep-ocean Assessment and Reporting of Tsunamis program.

"Tools based on this research could help officials forecast the potential for tsunami jets to merge," Song said. "This, in turn, could lead to more accurate coastal tsunami hazard maps to protect communities and critical infrastructure."

For more information on Jason-1 and Jason-2, visit: http://sealevel.jpl.nasa.gov .

For more information about presentations at the American Geophysical Union meeting, visit: http://www.nasa.gov/agu .