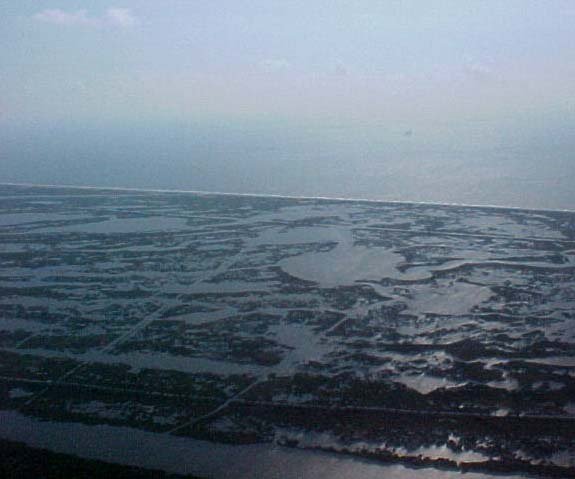 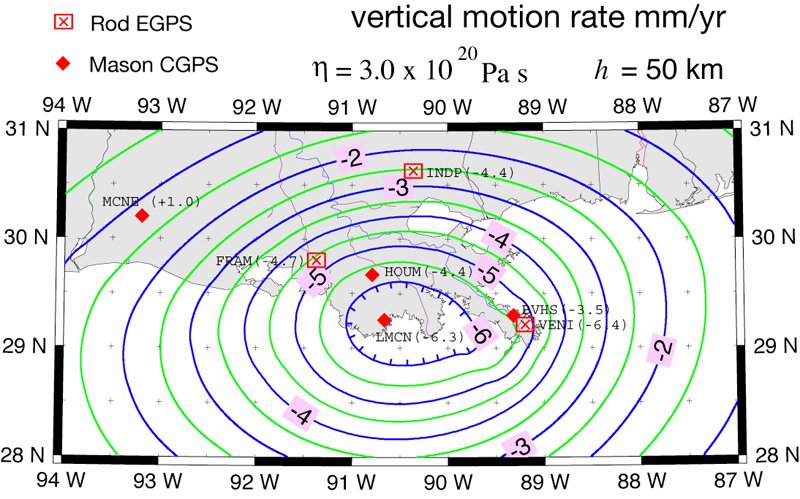 Predicted annual rates of sinking in the Gulf coast region, in millimeters per year, based on a numerical model of Earth deformation resulting from sea level rise and sediment deposits. This model does not include sinking from other sources.
Credit: NASA/JPL, Louisiana State University

A study by NASA and Louisiana State University scientists finds that sediments deposited into the Mississippi River delta thousands of years ago when North America's glaciers retreated are contributing to the ongoing sinking of Louisiana's coastline.

PASADENA, Calif. – A study by NASA and Louisiana State University scientists finds that sediments deposited into the Mississippi River Delta thousands of years ago when North America's glaciers retreated are contributing to the ongoing sinking of Louisiana's coastline. The weight of these sediments is causing a large section of Earth's crust to sag at a rate of 0.1 to 0.8 centimeters (0.04 to 0.3 inches) a year.

The sediments pose a particular challenge for New Orleans, causing it to sink irreversibly at a rate of about 0.4 centimeters (0.17 inches) a year, according to data from a network of global positioning system stations and a model of sediment data collected from the northern Gulf of Mexico and the Mississippi Delta.

Hurricanes Katrina and Rita in 2005 focused national attention on the Gulf coast's vulnerability to hurricanes due to loss of wetlands and sea level rise. These new findings add another factor for scientists, government agencies and the public to consider when assessing the vulnerability of the region to hurricanes and large storms.

A science team led by Erik Ivins of NASA's Jet Propulsion Laboratory, Pasadena, Calif., hypothesized that Earth's very slow gravitational flow response to the weight of the sediments, combined with a 130-meter (427-foot) rise in sea level that took place thousands of years ago, are contributing to the sinking of a 199,000-square kilometer (77,000-square-mile) section of coastal Louisiana.

To test their theory, the team developed a physical model of sinking caused by both the weight of the sea level rise and the flow of glacial sediments into the Gulf of Mexico following the retreat of the great ice sheet that covered much of North America some 22,000 years ago. The model spanned the past 750,000 years. Results were compared with actual global positioning system measurements and other geophysical data for southern Louisiana and the Gulf, collected from multiple sources over the past 60 years.

The scientists found the model results were in good agreement with the actual geophysical data, predicting sinking of between 0.1 centimeters (0.04 inches) and 0.8 centimeters (0.3 inches) a year. The highest sinking rates were observed where coastal land loss is greatest, near the center of the Mississippi and Atchafalaya River Delta complexes.

"Our study shows that the weight of these sediments on Earth's crust can explain between 0.1 and 0.8 centimeters (0.04 and 0.3 inches) of sinking per year," said study co-author Roy Dokka of Louisiana State University, Baton Rouge. "These sediments contribute a part of the region's sinking that's inevitable and must be considered when predicting rates of sinking and future sea level change in coastal Louisiana."

The scientists say when these results are combined with sinking totaling about 0.3 centimeters (0.12 inches) per year caused by other factors such as compaction and oxidation of sediments, pumping of oil and water by humans, faulting and sea level rise, the overall outlook isn't bright. "Louisiana is slowly losing its battle with the Gulf of Mexico," said Ivins. "Our model predicts this rate of sinking will continue for hundreds of years. Continued sinking, along with the sediment starvation of the coast caused by construction of flood control levees along the Mississippi River, will ultimately lead to the drowning of the coast."

Co-author Ron Blom of JPL adds that New Orleans is particularly vulnerable. "When the effect of this sinking near New Orleans is combined with a potential 0.9 centimeter (0.35 inch) annual sea level rise that could result should ice sheet melting accelerate as projected by many climate models, it is possible New Orleans could see a relative sea level rise of roughly one meter (3.3 feet) in the next 90 years," Blom said.

The good news, the authors say, is that, with refinement, their model may help the region prepare better for future large storms and the gradual inundation of the coast. "Our model gives civil engineers and disaster preparedness managers very precise predictions of how the landscape is changing so that they can better mitigate the effects of this sinking," said Ivins. "Understanding all of the processes affecting the coast is essential for engineering effective solutions."

Louisiana's coast is far from the centers of North America's former ice sheets, which were once as large as Antarctica, but successive periods of glacier formation and retreat have affected the region through sea level rises and changes in the flow of glacial sediments into the Gulf of Mexico. This process has been ongoing in cycles caused by regular variations in Earth's orbit. When the glaciers retreated, the resulting flooding transported large volumes of sediments down today's major river systems -- three to four times more than the Mississippi River currently transports.

Results of the study are published in Geophysical Research Letters. The research was funded by NASA, the National Science Foundation and the Louisiana Board of Regents. For more information, visit: http://www.nasa.gov. Additional media contact for this story: Ernie Ballard, Louisiana State University, 225-578-5685, eballa1@lsu.edu . JPL is managed for NASA by the California Institute of Technology in Pasadena.