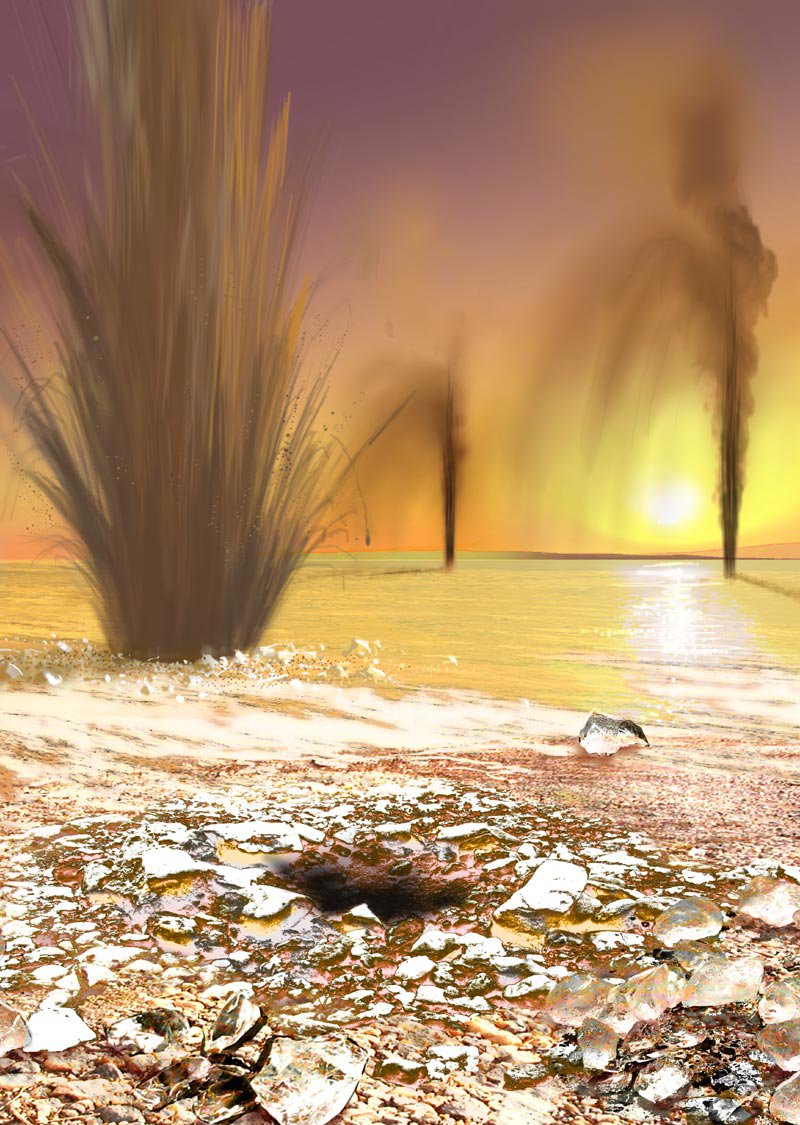 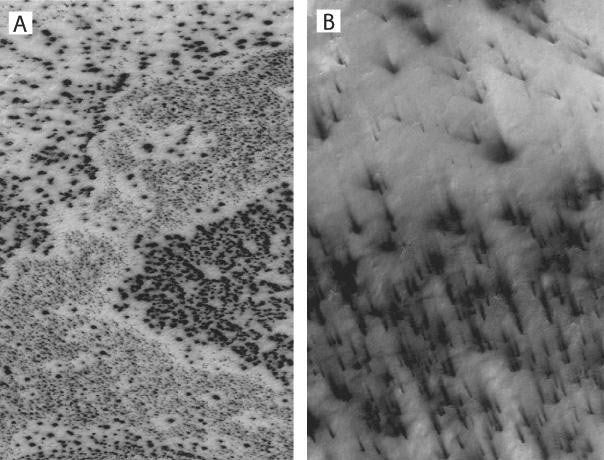 Jets of carbon dioxide gas erupting from the ice cap as it warms in the spring carry dark sand and dust high aloft. The dark material falls back to the surface, creating dark patches on the ice cap which have long puzzled scientists. Deducing the eruptions of carbon dioxide gas from under the warming ice cap solves the riddle of the spots. It also reveals that this part of Mars is much more dynamically active than had been expected for any part of the planet.

"If you were there, you'd be standing on a slab of carbon-dioxide ice," said Phil Christensen of Arizona State University, Tempe, principal investigator for Odyssey's camera. "All around you, roaring jets of carbon dioxide gas are throwing sand and dust a couple hundred feet into the air."

You'd also feel vibration through your spacesuit boots, he said. "The ice slab you're standing on is levitated above the ground by the pressure of gas at the base of the ice."

The team began its research in an attempt to explain mysterious dark spots, fan-like markings, and spider-shaped features seen in images that cameras on Odyssey and on NASA's Mars Global Surveyor have observed on the ice cap at the Martian south pole.

The dark spots, typically 15 to 46 meters (50 to 150 feet) wide and spaced several hundred feet apart, appear every southern spring as the sun rises over the ice cap. They last for several months and then vanish -- only to reappear the next year, after winter's cold has deposited a fresh layer of ice on the cap. Most spots even seem to recur at the same locations.

An earlier theory proposed that the spots were patches of warm, bare ground exposed as the ice disappeared. However, the camera on Odyssey, which sees in both infrared and visible-light wavelengths, discovered that the spots are nearly as cold as the carbon dioxide ice, suggesting they were just a thin layer of dark material lying on top of the ice and kept chilled by it. To understand how that layer is produced, Christensen's team used the camera -- the Thermal Emission Imaging System -- to collect more than 200 images of one area of the ice cap from the end of winter through midsummer.

Some places remained spot-free for more than 100 days, then developed many spots in a week. Fan-shaped dark markings didn't form until days or weeks after the spots appeared, yet some fans grew to half a mile in length. Even more puzzling was the origin of the "spiders," grooves eroded into the surface under the ice. The grooves converge at points directly beneath a spot.

"The key to figuring out the spiders and the spots was thinking through a physical model for what was happening," said Christensen. The process begins in the sunless polar winter when carbon dioxide from the atmosphere freezes into a layer about three feet thick on top of a permanent ice cap of water ice, with a thin layer of dark sand and dust in between. In spring, sunlight passing through the slab of carbon dioxide ice reaches the dark material and warms it enough that the ice touching the ground sublimates -- turns into gas.

Before long, the swelling reservoir of trapped gas lifts the slab and eventually breaks through at weak spots that become vents. High-pressure gas roars through at speeds of 161 kilometers per hour (100 miles per hour) or more. Under the slab, the gas erodes ground as it rushes toward the vents, snatching up loose particles of sand and carving the spidery network of grooves.

For additional information about Odyssey and the new findings, visit: http://www.nasa.gov/mars and http://themis.asu.edu .