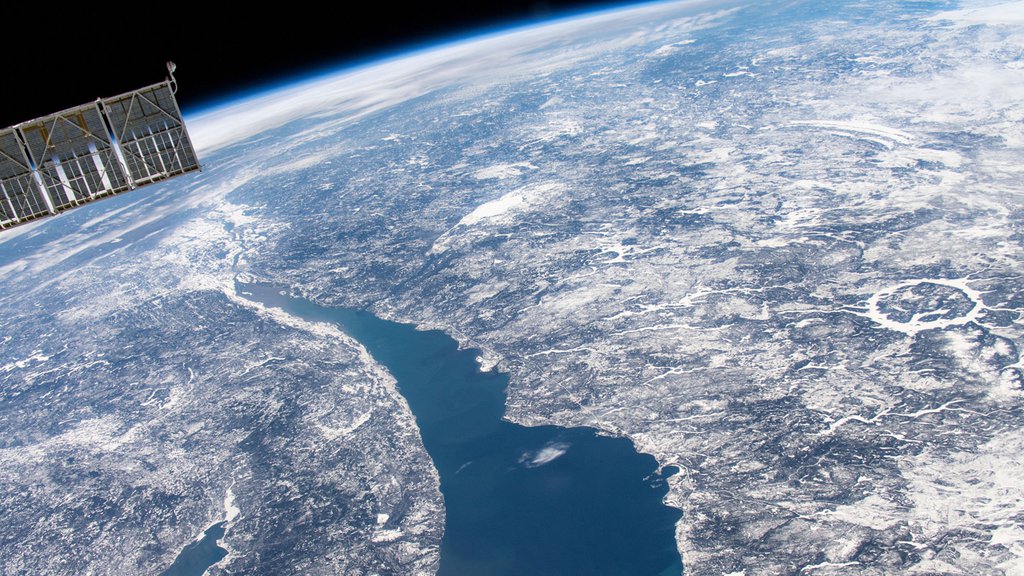 The Manicouagan impact crater in Quebec, Canada, is one of many reminders that asteroids have impacted Earth. Although large impacts are rare, it's important to be prepared. That's why NASA, other U.S. agencies and international partners gather periodically to simulate impact scenarios and discuss the best course of action for disaster mitigation.
Credit: International Space Station

Next week, NASA will participate in a "tabletop exercise" that will play out a realistic - but fictional - scenario of an asteroid on an impact trajectory with Earth.

Each day this week, we will be providing updates on a fictional impact scenario playing out at the International Planetary Science Conference in College Park, Maryland. This scenario is designed to help key decision makers practice for a real asteroid impact. Currently, there is no known asteroid with a significant probability of impacting Earth in the next century.

Day 5: What Was This Exercise All About?
This week at the 2019 Planetary Defense Conference, conference participants were tasked with responding to a hypothetical asteroid impact scenario in which they have eight years to stop an asteroid on a collision course with Earth. Every day, the audience heard updates - at one point, they weren't sure whether the 140-260-meter-wide (500-850-feet-wide) asteroid was actually going to hit Earth. Once they found out it was on a certain collision, NASA and space agencies around the world decided to send a fleet of kinetic impactors to deflect the asteroid. The kinetic impactors hit the asteroid ... but ended up splitting off a chunk, which, on Day 4 (four years from impact), again was headed towards Earth.

"Each day we ask, what if?" said Paul Chodas, the creator of this week's scenario and the director of the Center for Near Earth Object Studies at NASA's Jet Propulsion Laboratory in Pasadena, California. He stressed that no one at the conference believes that this exact scenario would play out this way in real life. More likely, any asteroid heading towards a certain Earth impact would end up in an ocean. But that's not the point of an exercise like this, he said.

"We need to challenge ourselves and ask the tough questions," Chodas said. "You don't learn anything if you don't study the worst possible case each day."

Today, on Day 5 of the exercise, we've jumped ahead in time to 10 days from impact. Scientists on the ground now know that the asteroid is headed towards New York City. The small asteroid will enter Earth's atmosphere at 19 km/s (43,000 mph) on April 29, 2027, producing a large fireball or "megabolide," and predicted to release 5-20 megatons of energy in the airburst.

Participants discussed the financial, economic and human consequences of an impact over a large, densely populated area like New York City.

"Bringing together the disaster management community and the scientific community is critical to preparing for a potential asteroid impact in the future," Leviticus Lewis of the Response Operations Division for FEMA. "This exercise is valuable in that it continues the work currently in progress to identify key questions and issues for this low probability but high consequence scenario."

Day 4: Fragment of Asteroid 2019 PDC Hurtles Towards Earth
EXERCISE ONLY - Today's update of the hypothetical impact scenario puts us in September of 2024, when NASA announces that although the kinetic impactors have collided with the asteroid 2019 PDC, a 50-80 meter fragment (165-260 feet) has broken off and is on a certain collision course with Earth. The orbiting observation spacecraft was also lost during the kinetic impactor engagement. Although the International Asteroid Warning Network isn't certain where the asteroid will strike, they've narrowed down possible locations to the Eastern United States or somewhere in the Atlantic Ocean on April 29, 2027. A ground-based observation campaign is underway to learn more about the asteroid and where exactly it will strike Earth.

Day 3: Collision Location Revealed in Hypothetical Impact Scenario
EXERCISE ONLY - Wednesday's impact scenario exercise advances the calendar once again, but this time multiple years to Dec. 30, 2021. In this hypothetical future, NASA's reconnaissance mission to asteroid 2019 PDC reveals that the 140-260-meter asteroid is headed for an impact just outside Denver on April 29, 2027. The agency plans to launch two spacecraft in spring 2022 to rendezvous with the asteroid to learn more about it. While the rendezvous spacecraft are cruising towards 2019 PDC, NASA and other international partners will also launch six missions, each holding multiple kinetic impactors, to try to push the asteroid away from its life-threatening orbit. The impactors will collide with 2019 PDC in late Aug., 2024.

Day 2: Impact Scenario Update at the 6th International Planetary Defense Conference
EXERCISE ONLY - Tuesday's hypothetical scenario update advances the calendar to July 2019, when asteroid 2019 PDC has a 1 in 10 chance of colliding with Earth on April 29, 2027. This probability was calculated by experts in the International Asteroid Warning Network using hundreds of observations from telescopes around the world. Additional space-based infrared observations from the NEOWISE spacecraft, allow experts to estimate the size of the asteroid at about 140-260 meters (460-850 feet). If an asteroid of this size should impact, it could release 100-800 megatons of energy, devastating a large region, but not enough to cause a global catastrophe, according to experts. The international forum for space agencies called the Space Mission Planning Advisory Group (SMPAG) recommends that space-capable nations should prepare for space-based reconnaissance missions and mitigation activities.

While headlines routinely report on "close shaves" and "near-misses" when near-Earth objects (NEOs) such as asteroids or comets pass relatively close to Earth, the real work of preparing for the possibility of a NEO impact with Earth goes on mostly out of the public eye.

For more than 20 years, NASA and its international partners have been scanning the skies for NEOs, which are asteroids and comets that orbit the Sun and come within 30 million miles (50 million kilometers) of Earth's orbit. International groups, such as NASA's Planetary Defense Coordination Office (PDCO), the European Space Agency's Space Situational Awareness-NEO Segment and the International Asteroid Warning Network (IAWN) have made better communication of the hazards posed by NEOs a top priority.

In the spirit of better communication, next week at the 2019 Planetary Defense Conference, NASA's PDCO and other U.S. agencies and space science institutions, along with international partners, will participate in a "tabletop exercise" that will play out a realistic - but fictional - scenario for an asteroid on an impact trajectory with Earth.

A tabletop exercise of a simulated emergency commonly used in disaster management planning to help inform involved players of important aspects of a possible disaster and identify issues for accomplishing a successful response. In next week's exercise, attendees at the conference will play out a fictional NEO impact scenario developed by the NASA Jet Propulsion Laboratory's Center for NEO Studies (CNEOS).

"These exercises have really helped us in the planetary defense community to understand what our colleagues on the disaster management side need to know," said Lindley Johnson, NASA's Planetary Defense Officer. "This exercise will help us develop more effective communications with each other and with our governments."

This type of exercise is also specifically identified as part of the National Near-Earth Object Preparedness Strategy and Action Plan developed over a two-year period and published by the White House in June 2018.

These exercises are not tightly scripted. The point is to investigate how NEO observers, space agency officials, emergency managers, decision makers and citizens might respond to an actual impact prediction and evolving information. Next week's exercise events will occur over the five days of the conference, with exercise leaders briefing participants on the status of the scenario at the end of each day and soliciting response ideas and feedback, based on the latest fictional data.

The scenario begins with the fictional premise that on March 26, astronomers "discovered" a NEO they consider potentially hazardous to Earth. After a "few months" of tracking, observers predict that this NEO - dubbed 2019 PDC - poses a 1 in 100 chance of impact with Earth in 2027 (in real life, the international community has decided that a 1 in 100 chance of impact is the threshold for action). Participants in this exercise will discuss potential preparations for asteroid reconnaissance and deflection missions and planning for mitigation of a potential impact's effects.

NASA has participated in six NEO impact exercises so far - three at Planetary Defense Conferences (2013, 2015, 2017) and three jointly with the Federal Emergency Management Agency (FEMA). The three NASA-FEMA exercises included representatives of several other federal agencies, including the Departments of Defense and State. Each exercise builds on lessons learned in the previous exercise.

What NASA has learned from working with FEMA is that emergency management officials are not focused on the scientific details about the asteroid. "What emergency managers want to know is when, where and how an asteroid would impact, and the type and extent of damage that could occur," said Leviticus Lewis of the Response Operations Division for FEMA.

But the scientific details are what determine these things, so NASA-funded researchers continue to develop capabilities for determining more exact possible impact locations and effects, based on what could be observed about an asteroid's position, orbital motion and characteristics, to be ready to produce the most accurate predictions possible in the event an actual impact threat were discovered.

"NASA and FEMA will continue to conduct periodic exercises with a continually widening community of U.S. government agencies and international partners," said Johnson. "They are a great way for us to learn how to work together and meet each other's needs and the objectives laid out in the White House National NEO Preparedness Action Plan."