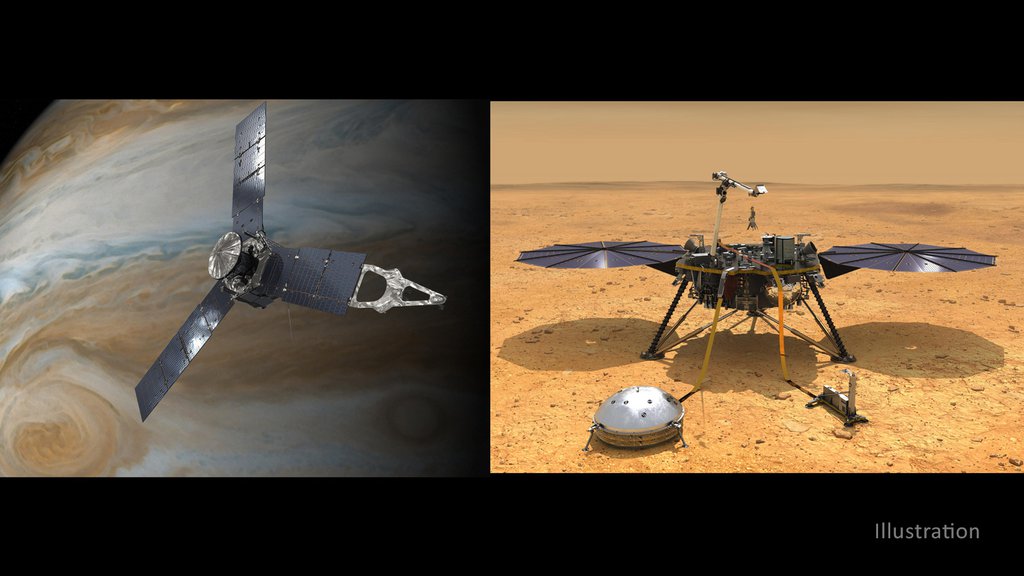 NASA has extended both the Juno mission at Jupiter through September 2025 (left) and the InSight mission at Mars through December 2022.

The missions - Juno and InSight - have each increased our understanding of our solar system, as well as spurred new sets of diverse questions.

As NASA prepares to send astronauts back to the Moon and on to Mars, the agency's quest to seek answers about our solar system and beyond continues to inform those efforts and generate new discoveries. The agency has extended the missions of two spacecraft, following an external review of their scientific productivity.

The missions - Juno and InSight - have each increased our understanding of our solar system, as well as spurred new sets of diverse questions.

An independent review panel, composed of experts with backgrounds in science, operations, and mission management, found the Juno and InSight missions have "produced exceptional science" and recommended NASA continue both missions.

The Juno spacecraft and its mission team have made discoveries about Jupiter's interior structure, magnetic field, and magnetosphere, and have found its atmospheric dynamics to be far more complex than scientists previously thought. Extended through September 2025, or its end of life (whichever comes first), the mission will not only continue key observations of Jupiter, but also will expand its investigations to the larger Jovian system including Jupiter's rings and large moons, with targeted observations and close flybys planned of the moons Ganymede, Europa, and Io.

The InSight mission is extended for two years, running through December 2022. InSight's spacecraft and team deployed and operated its highly sensitive seismometer to expand our understanding of Mars' crust and mantle. Searching for and identifying Marsquakes, the mission team collected data clearly demonstrating the robust tectonic activity of the Red Planet, and enhanced our knowledge of the planet's atmospheric dynamics, magnetic field, and interior structure. InSight's extended mission will focus on producing a long-duration, high quality seismic dataset. Continued operation of its weather station and burial of the seismic tether using the spacecraft's Instrument Deployment Arm (IDA), will contribute to the quality of this seismic dataset. The extended mission may continue deployment (at low priority) of the spacecraft's Heat Probe and Physical Properties instrument (HP3), which remains close to the surface.

"The Senior Review has validated that these two planetary science missions are likely to continue to bring new discoveries, and produce new questions about our solar system," said Lori Glaze, director of the planetary science division at NASA Headquarters in Washington. "I thank the members of the Senior Review panel for their comprehensive analysis and thank the mission teams as well, who will now continue to provide exciting opportunities to refine our understanding of the dynamic science of Jupiter and Mars."

Extended missions leverage NASA's large investments, allowing continued science operations at a cost far lower than developing a new mission. In some cases, the extensions allow missions to continue to acquire valuable long-duration datasets, while in other cases, they allow missions to visit new targets, with entirely new science goals.

The detailed reports from the 2020 Planetary Science Senior Review may be found at: