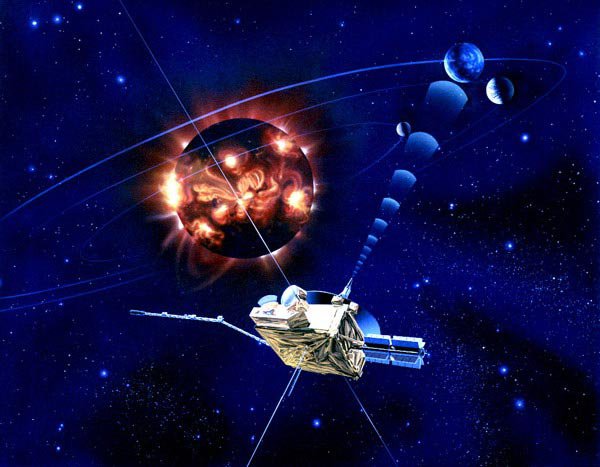 The 16-year-old Ulysses spacecraft reaches what could be considered a low point in its mission observing the sun today - and solar scientists could not be happier.

The 16-year-old Ulysses spacecraft reaches what could be considered a low point in its mission observing the sun today - and solar scientists could not be happier. The European-manufactured, joint NASA- and ESA-managed spacecraft, has reached maximum latitude in its exploration of the heliosphere, the bubble in space blown out by the solar wind.

"At max latitude we are actually passing below the sun looking almost directly up at its south pole from 329 million kilometers (204 million miles) away," said Nigel Angold, Ulysses mission operations manager from the European Space Agency. "The trajectory provides a perspective of the sun no other spacecraft can equal."

This unusual perspective is courtesy of the spacecraft's one-of-its-kind 6.3-year-long orbit around the sun. An orbit that swings Ulysses both over and under the sun's polar regions and as far out as the orbit of Jupiter.

"Max latitude is the start of an important mission phase," said Dr. Ed Smith, Ulysses project scientist at NASA's Jet Propulsion Laboratory, Pasadena, Calif. "The spacecraft will soon begin accelerating as it transits from below the sun's south pole to its equator and then up and over its north pole. This trajectory provides us a ringside seat to all the solar processes we want to observe."

This phase of the mission is expected to return high priority scientific observations revealing the changing sun and its effect on space during the ongoing minimum in the 11-year sunspot cycle. During this portion of the mission, Ulysses will rapidly scan the sun's magnetic field, solar plasmas, solar radio noise, energetic particles, galactic cosmic rays and cosmic dust between the poles and the equator – imparting a more complete perspective of the sun's atmosphere.

Understanding the Earth's nearest star and its processes is paramount, as the space weather created by the sun has a huge effect on the third rock from it and its inhabitants. The sun's gaseous outer atmosphere can create huge space storms. This violent space weather, in turn, can affect Earth's electrical grid, cell phone communications, the functioning of satellites and the operation of astronauts in orbit. This passage between the sun's poles is the third in the 17 years of Ulysses operations. The first transit occurred during the previous sunspot minimum in 1994 to 1995, and the second during sunspot maximum in 2000 to 2001. The opportunity to repeat the scientific investigations during the ongoing solar minimum is important because the sun’s magnetic field has changed significantly since the previous minimum.

The Ulysses spacecraft was carried into Earth orbit in the cargo bay of the Space Shuttle Discovery on Oct. 6, 1990. From Earth orbit it was propelled toward Jupiter by solid-fuel motors. Ulysses passed Jupiter on Feb. 8, 1992; the giant planet's gravity bent the spacecraft's flight path downward and away from the ecliptic plane. This put it into a final orbit around the sun that would take it past the sun's north and south poles.

More information about NASA's Ulysses mission is available on the Web at http://ulysses.jpl.nasa.gov .
+ Ulysses home page