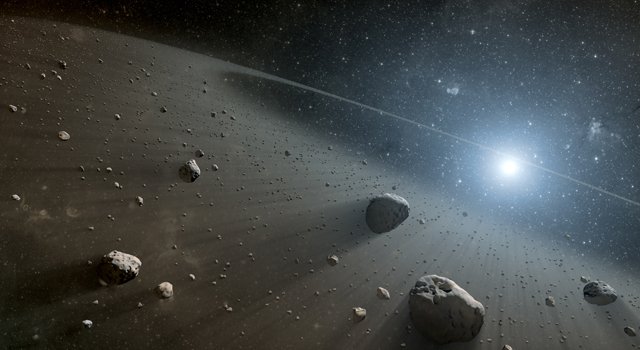 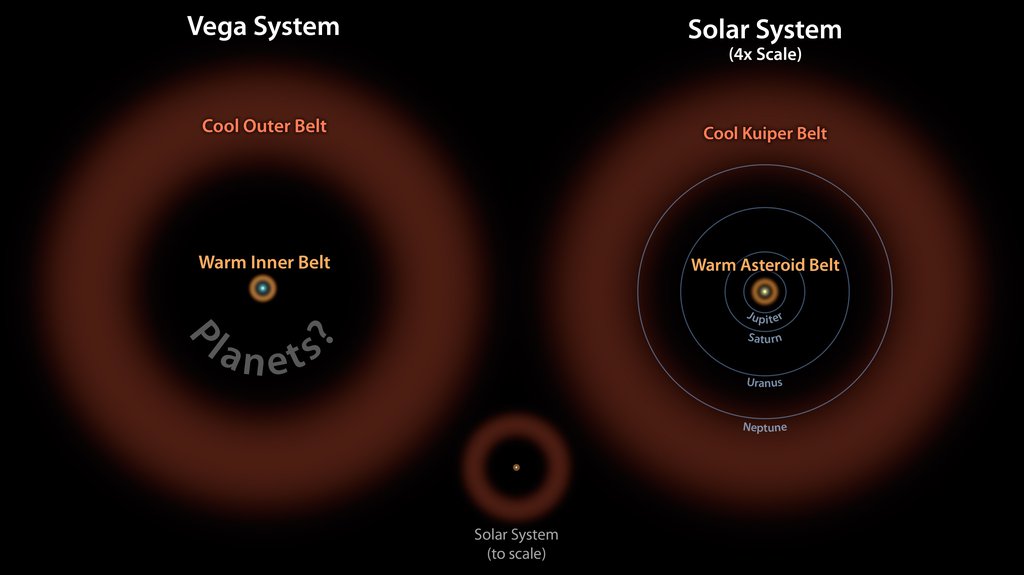 Astronomers have discovered what appears to be a large asteroid belt around the bright star Vega, as illustrated here at left in brown.› Full image and caption
Credit: NASA/JPL-Caltech

Astronomers have discovered what appears to be a large asteroid belt around the star Vega, the second brightest star in northern night skies.

PASADENA, Calif. - Astronomers have discovered what appears to be a large asteroid belt around the star Vega, the second brightest star in northern night skies. The scientists used data from NASA's Spitzer Space Telescope and the European Space Agency's Herschel Space Observatory, in which NASA plays an important role.

The discovery of an asteroid belt-like band of debris around Vega makes the star similar to another observed star called Fomalhaut. The data are consistent with both stars having inner, warm belts and outer, cool belts separated by a gap. This architecture is similar to the asteroid and Kuiper belts in our own solar system.

What is maintaining the gap between the warm and cool belts around Vega and Fomalhaut? The results strongly suggest the answer is multiple planets. Our solar system's asteroid belt, which lies between Mars and Jupiter, is maintained by the gravity of the terrestrial planets and the giant planets, and the outer Kuiper belt is sculpted by the giant planets.

"Our findings echo recent results showing multiple-planet systems are common beyond our sun," said Kate Su, an astronomer at the Steward Observatory at the University of Arizona, Tucson. Su presented the results Tuesday at the American Astronomical Society meeting in Long Beach, Calif., and is lead author of a paper on the findings accepted for publication in the Astrophysical Journal.

Vega and Fomalhaut are similar in other ways. Both are about twice the mass of our sun and burn a hotter, bluer color in visible light. Both stars are relatively nearby, at about 25 light-years away. The stars are thought to be around 400 million years old, but Vega could be closer to its 600 millionth birthday. Fomalhaut has a single candidate planet orbiting it, Fomalhaut b, which orbits at the inner edge of its cometary belt.

The Herschel and Spitzer telescopes detected infrared light emitted by warm and cold dust in discrete bands around Vega and Fomalhaut, discovering the new asteroid belt around Vega and confirming the existence of the other belts around both stars. Comets and the collisions of rocky chunks replenish the dust in these bands. The inner belts in these systems cannot be seen in visible light because the glare of their stars outshines them.

Both the inner and outer belts contain far more material than our own asteroid and Kuiper belts. The reason is twofold: the star systems are far younger than our own, which has had hundreds of millions more years to clean house, and the systems likely formed from an initially more massive cloud of gas and dust than our solar system.

The gap between the inner and outer debris belts for Vega and Fomalhaut also proportionally corresponds to the distance between our sun's asteroid and Kuiper belts. This distance works out to a ratio of about 1:10, with the outer belt 10 times farther from its host star than the inner belt. As for the large gap between the two belts, it is likely there are several undetected planets, Jupiter-size or smaller, creating a dust-free zone between the two belts. A good comparison star system is HR 8799, which has four known planets that sweep up the space between two similar disks of debris.

"Overall, the large gap between the warm and the cold belts is a signpost that points to multiple planets likely orbiting around Vega and Fomalhaut," said Su.

If unseen planets do, in fact, orbit Vega and Fomalhaut, these bodies will not likely stay hidden.

Herschel is a European Space Agency cornerstone mission, with science instruments provided by consortia of European institutes and with important participation by NASA. NASA's Herschel Project Office is based at JPL, which contributed mission-enabling technology for two of Herschel's three science instruments. The NASA Herschel Science Center, part of the Infrared Processing and Analysis Center at Caltech, supports the United States astronomical community. More information is online at: http://www.herschel.caltech.edu , http://www.nasa.gov/herschel , and http://www.esa.int/SPECIALS/Herschel/index.html .