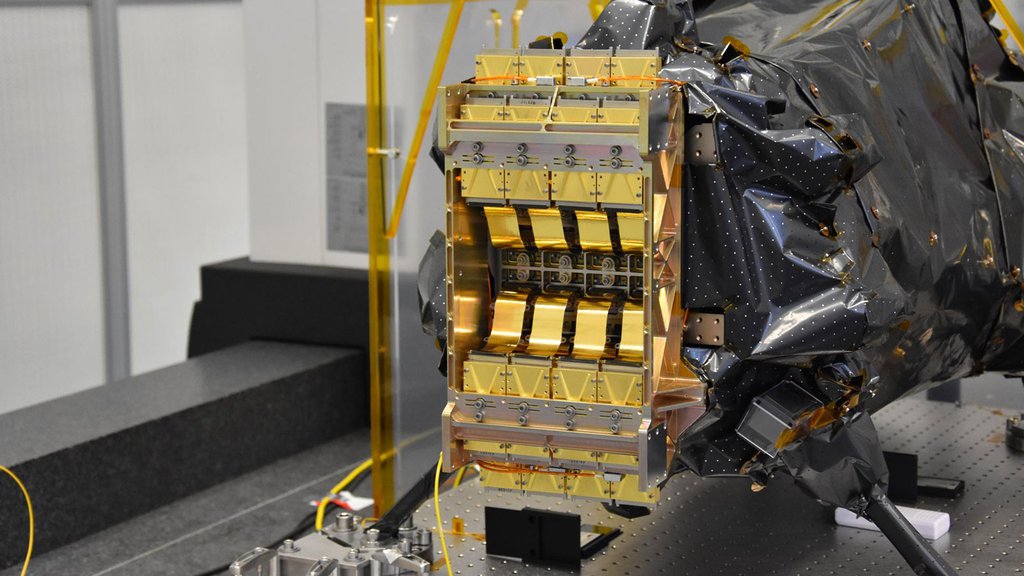 The cryogenic (cold) portion of the Euclid space telescope's Near Infrared Spectrometer and Photometer (NISP) instrument. NASA led the procurement and delivery of the detectors for the NISP instrument. The gold-coated hardware is the 16 sensor-chip electronics integrated with the infrared sensors.
Credit: Euclid Consortium/CPPM/LAM 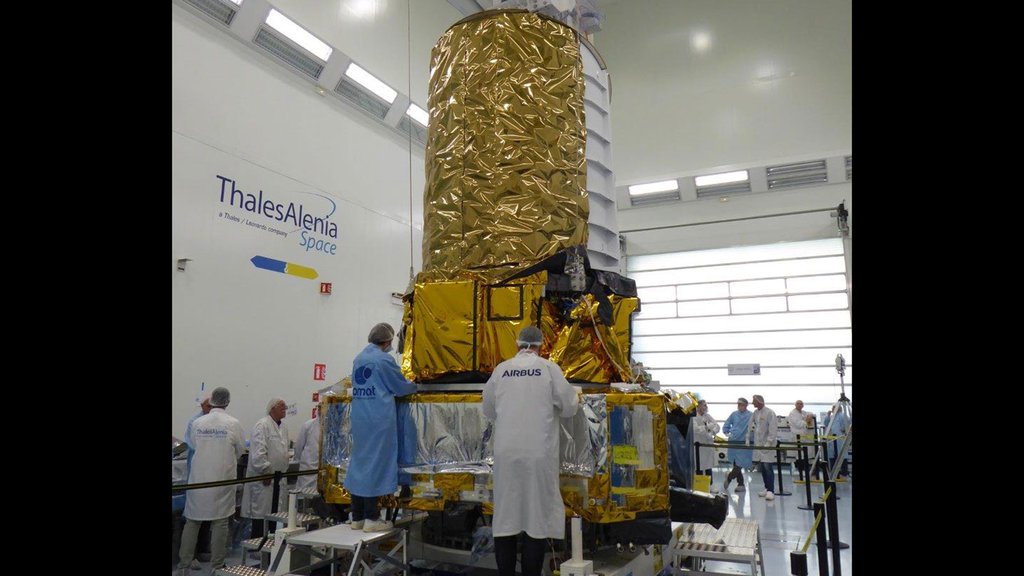 Set to launch in 2022, the Euclid mission will probe some of the biggest questions in modern astrophysics, with help from international partners.

The European Space Agency's Euclid mission, set to launch in 2022, will investigate two of the biggest mysteries in modern astronomy: dark matter and dark energy. A team of NASA engineers recently delivered critical hardware for one of the instruments that will fly on Euclid and probe these cosmic puzzles.

Based at NASA's Jet Propulsion Laboratory in Pasadena, California, and the Goddard Space Flight Center in Greenbelt, Maryland, the engineers designed, fabricated and tested 20 pieces of sensor-chip electronics (SCEs) hardware for Euclid (16 for the flight instrument and four backups). These parts, which operate at minus 213 degrees Fahrenheit (minus 136 degrees Celsius), are responsible for precisely amplifying and digitizing the tiny signals from the light detectors in Euclid's Near Infrared Spectrometer and Photometer (NISP) instrument. The Euclid observatory will also carry a visible-light imaging instrument.

The image, taken in May 2019, above shows the detectors and sensor-chip electronics on a flight model of the NISP instrument in the Laboratory of Astrophysics of Marseille in France. Eighteen SCEs have been delivered to the European Space Agency (ESA), and two more will soon be on their way. The detector system will undergo extensive testing ahead of launch.

"Even under the best of circumstances, it is extremely challenging to design and build very sensitive and complex electronics that function reliably at very cold operating temperatures," said Moshe Pniel, the U.S. project manager for Euclid at JPL, who led the team that delivered the sensor-chip electronics. "This truly remarkable team, spread across two NASA centers, accomplished this task under intense schedule pressure and international attention."

Euclid will conduct a survey of billions of distant galaxies, which are moving away from us at a faster and faster rate as the expansion of space itself accelerates. Scientists don't know what causes this accelerating expansion but have named the source of this phenomenon dark energy. By observing the effect of dark energy on the distribution of a large population of galaxies, scientists will try to narrow down what could possibly be driving this mysterious phenomenon.

In addition, Euclid will provide insights into the mystery of dark matter. While we can't see dark matter, it's five times more prevalent in the universe than the "regular" matter that makes up planets, stars and everything else we can see in the universe.

To detect dark matter, scientists look for the effects of its gravity. Euclid's census of distant galaxies will reveal how the large-scale structure of the universe is shaped by the interplay of regular matter, dark matter and dark energy. This in turn will allow scientists to learn more about the properties and effects of both dark matter and dark energy in the universe, and to get closer to understanding their fundamental nature.

The NISP instrument is led by the Laboratory of Astrophysics of Marseille, with contributions from 15 countries, including the United States, through an agreement between ESA and NASA.

Three NASA-supported science groups contribute to the Euclid mission. In addition to designing and fabricating the NISP sensor-chip electronics, JPL led the procurement and delivery of the NISP detectors. Those detectors were tested at NASA's Goddard Space Flight Center. The Euclid NASA Science Center at IPAC (ENSCI), at Caltech, will support U.S.-based investigations using Euclid data.

For more information about Euclid go to: