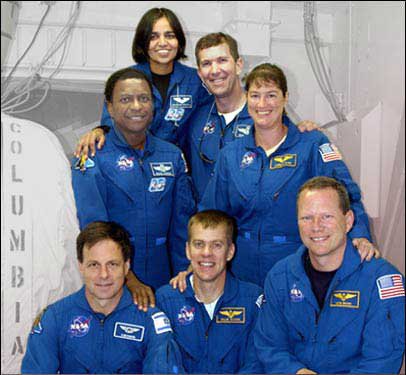 "These seven hills on Mars are named for those seven brave souls, the final crew of the Space Shuttle Columbia. The Columbia crew faced the challenge of space and made the supreme sacrifice in the name of exploration," Administrator O'Keefe said.

The Shuttle Columbia was commanded by Rick Husband and piloted by William McCool. The mission specialists were Michael Anderson, Kalpana Chawla, David Brown, Laurel Clark; and the payload specialist was Israeli astronaut Ilan Ramon. On February 1, 2003, the Columbia and its crew were lost over the western United States during re-entry into Earth's atmosphere

The 28th and final flight of Columbia was a 16-day mission dedicated to research in physical, life and space sciences. The Columbia crew successfully conducted approximately 80 separate experiments during their mission.

NASA will submit the names of the Mars features to the International Astronomical Union for official designation. The organization serves as the internationally recognized authority for assigning designations to celestial bodies and their surface features.

An image taken by the Mars Global Surveyor Mars Orbiter Camera of the Columbia Memorial Station and Columbia Hills is available on the Internet at: http://www.jpl.nasa.gov/mer2004/rover-images/feb-02-2004/captions/image-10.html.

For information about NASA and the Mars mission on the Internet, visit: http://www.nasa.gov.

The Jet Propulsion Laboratory, a division of the California Institute of Technology, Pasadena, manages the Mars Exploration Rover project for NASA's Office of Space Science, Washington, D.C. Additional information about the project is available on the Internet at: http://marsrovers.jpl.nasa.gov.