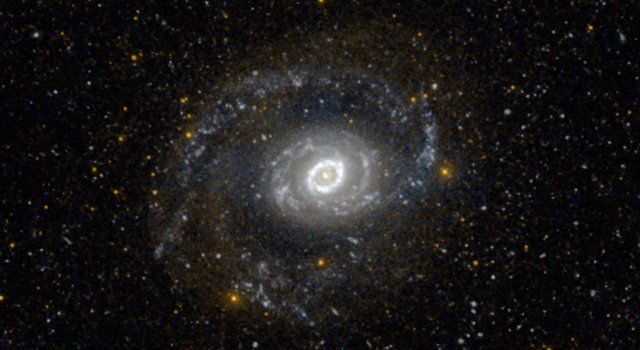 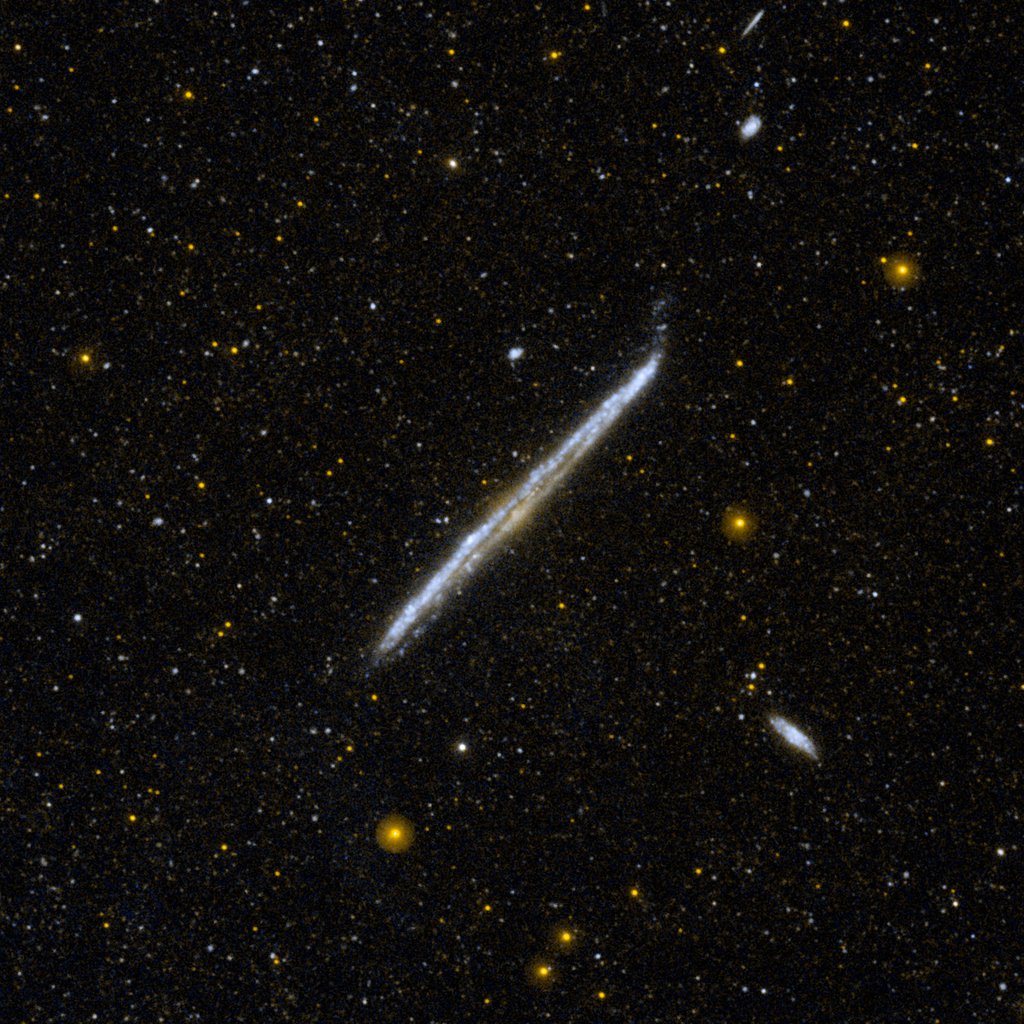 This image from NASA's Galaxy Evolution Explorer shows NGC 4565, one of the nearest and brightest galaxies not included in the famous list by 18th-century comet hunter Charles Messier.› Full image and caption
Credit: NASA/JPL-Caltech 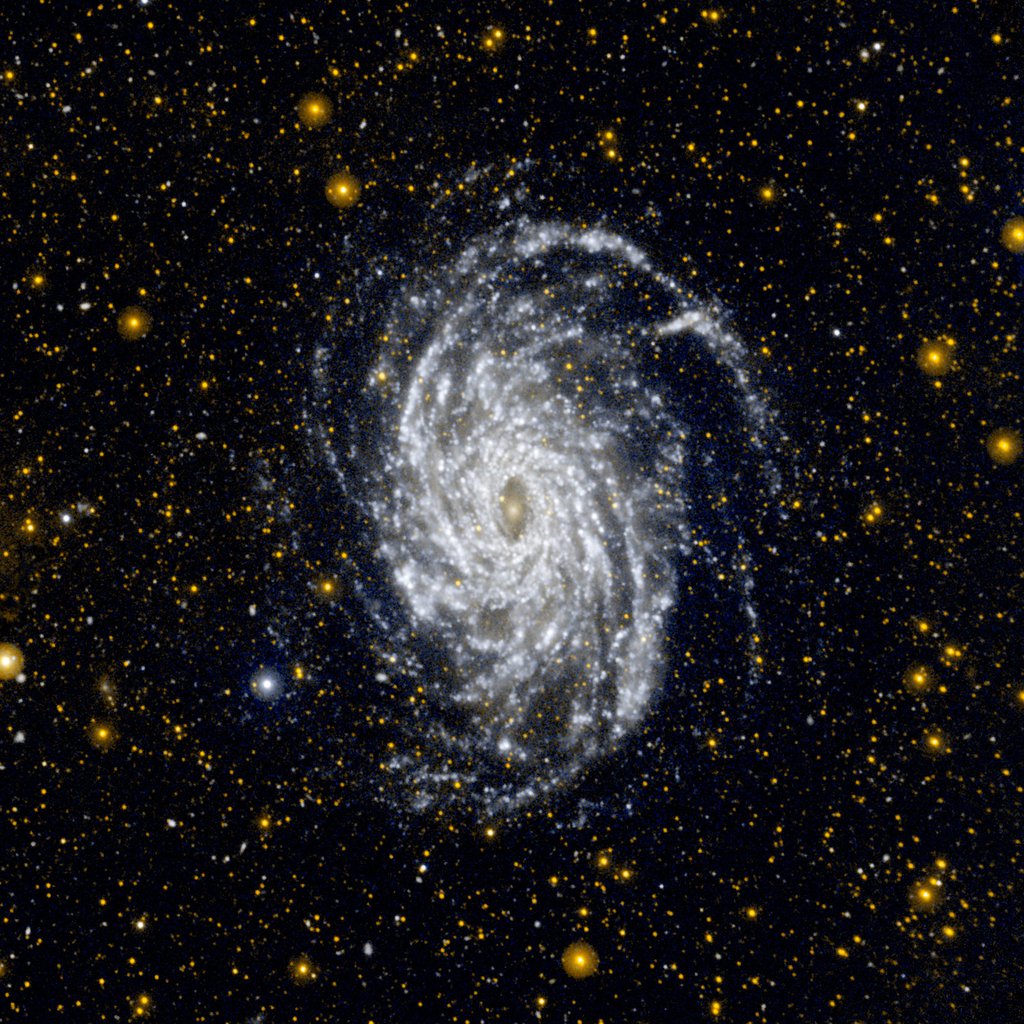 This image from NASA's Galaxy Evolution Explorer shows NGC 6744, one of the galaxies most similar to our Milky Way in the local universe. This ultraviolet view highlights the vast extent of the fluffy spiral arms, and demonstrates that star formation can occur in the outer regions of galaxies.› Full image and caption
Credit: NASA/JPL-Caltech

NASA has turned off its Galaxy Evolution Explorer (GALEX) after a decade of operations in which the telescope used ultraviolet vision to study hundreds of millions of galaxies.

PASADENA, Calif. -- NASA has turned off its Galaxy Evolution Explorer (GALEX) after a decade of operations in which the venerable space telescope used its ultraviolet vision to study hundreds of millions of galaxies across 10 billion years of cosmic time.

"GALEX is a remarkable accomplishment," said Jeff Hayes, NASA's GALEX program executive in Washington. "This small Explorer mission has mapped and studied galaxies in the ultraviolet, light we cannot see with our own eyes, across most of the sky."

Operators at Orbital Sciences Corporation in Dulles, Va., sent the signal to decommission GALEX at 12:09 p.m. PDT (3:09 p.m. EDT) Friday, June 28. The spacecraft will remain in orbit for at least 65 years, then fall to Earth and burn up upon re-entering the atmosphere. GALEX met its prime objectives and the mission was extended three times before being cancelled.

Highlights from the mission's decade of sky scans include:

-- Discovering a gargantuan, comet-like tail behind a speeding star called Mira.
-- Catching a black hole "red-handed" as it munched on a star.
-- Finding giant rings of new stars around old, dead galaxies.
-- Independently confirming the nature of dark energy.
-- Discovering a missing link in galaxy evolution -- the teenage galaxies transitioning from young to old.

The mission also captured a dazzling collection of snapshots, showing everything from ghostly nebulas to a spiral galaxy with huge, spidery arms.

In a first-of-a-kind move for NASA, the agency in May 2012 loaned GALEX to the California Institute of Technology in Pasadena, which used private funds to continue operating the satellite while NASA retained ownership. Since then, investigators from around the world have used GALEX to study everything from stars in our own Milky Way galaxy to hundreds of thousands of galaxies 5 billion light-years away.

In the space telescope's last year, it scanned across large patches of sky, including the bustling, bright center of our Milky Way. The telescope spent time staring at certain areas of the sky, finding exploded stars, called supernovae, and monitoring how objects, such as the centers of active galaxies, change over time. GALEX also scanned the sky for massive, feeding black holes and shock waves from early supernova explosions.

"In the last few years, GALEX studied objects we never thought we'd be able to observe, from the Magellanic Clouds to bright nebulae and supernova remnants in the galactic plane," said David Schiminovich of Columbia University, N.Y., N.Y, a longtime GALEX team member who led science operations over the past year. "Some of its most beautiful and scientifically compelling images are part of this last observation cycle."

Data from the last year of the mission will be made public in the coming year.

"GALEX, the mission, may be over, but its science discoveries will keep on going," said Kerry Erickson, the mission's project manager at NASA's Jet Propulsion Laboratory in Pasadena, Calif.

A slideshow showing some of the popular GALEX images is online at: http://go.nasa.gov/17xAVDd

Graphics and additional information about the Galaxy Evolution Explorer are online at: http://www.nasa.gov/galex