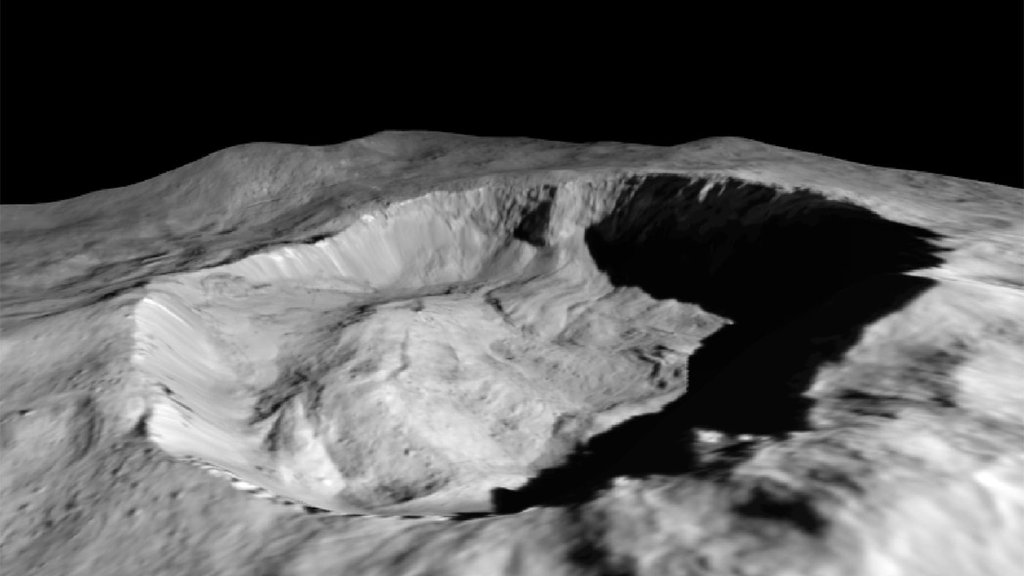 This view from NASA's Dawn mission shows where ice has been detected in the northern wall of Ceres' Juling Crater, which is in almost permanent shadow.› Full image and caption
Credit: NASA/JPL-Caltech/UCLA/MPS/DLR/IDA/ASI/INAF 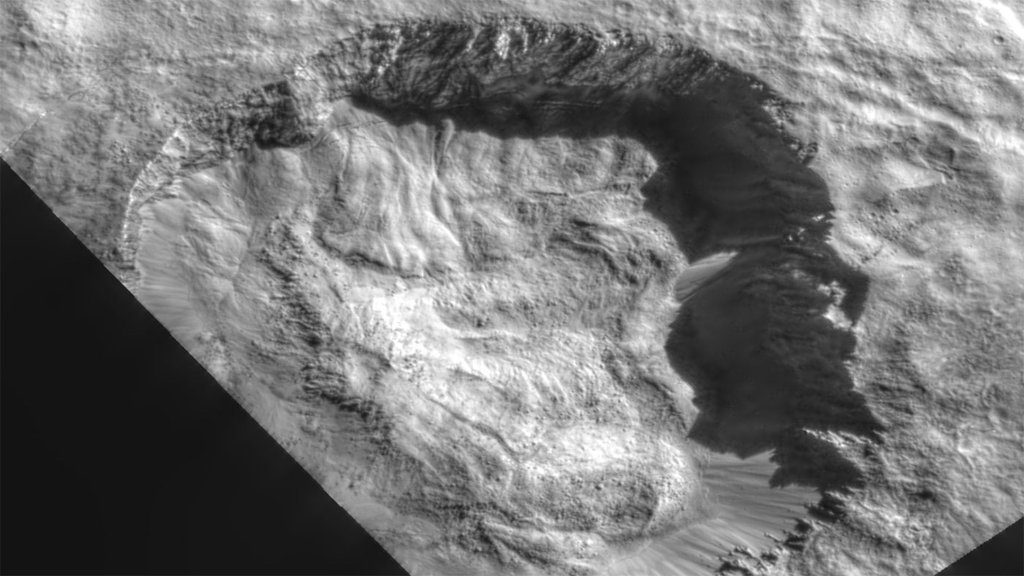 This view from NASA's Dawn mission shows the floor of Ceres' Juling Crater. The crater floor shows evidence of the flow of ice and rock, similar to rock glaciers in Earth's polar regions.› Full image and caption
Credit: NASA/JPL-Caltech/UCLA/MPS/DLR/IDA/ASI/INAF

Observations of Ceres have detected recent variations in its surface, revealing that the dwarf planet is a dynamic body that continues to evolve and change.

Observations of Ceres have detected recent variations in its surface, revealing that the only dwarf planet in the inner solar system is a dynamic body that continues to evolve and change.

NASA's Dawn mission has found recently exposed deposits that give us new information on the materials in the crust and how they are changing, according to two papers published March 14 in Science Advances that document the new findings.

Observations obtained by the visible and infrared mapping spectrometer (VIR) on the Dawn spacecraft previously found water ice in a dozen sites on Ceres. The new study revealed the abundance of ice on the northern wall of Juling Crater, a crater 12 miles (20 kilometers) in diameter. The new observations, conducted from April through October 2016, show an increase in the amount of ice on the crater wall.

This view from NASA's Dawn mission shows Ceres' tallest mountain, Ahuna Mons, 2.5 miles (4 kilometers) high and 11 miles (17 kilometers) wide. This is one of the few sites on Ceres at which a significant amount of sodium carbonate has been found, shown in green and red colors in the lower right image. Credit: NASA/JPL-Caltech/UCLA/MPS/DLR/IDA/ASI/INAF
› Full image and caption

"This is the first direct detection of change on the surface of Ceres," said Andrea Raponi of the Institute of Astrophysics and Planetary Science in Rome.

Raponi led the new study, which found changes in the amount of ice exposed on the dwarf planet. "The combination of Ceres moving closer to the sun in its orbit, along with seasonal change, triggers the release of water vapor from the subsurface, which then condenses on the cold crater wall. This causes an increase in the amount of exposed ice. The warming might also cause landslides on the crater walls that expose fresh ice patches."

By combining chemical, geological and geophysical observations, the Dawn mission is producing a comprehensive view of Ceres. Previous data had shown Ceres has a crust about 25 miles (40 kilometers) thick and rich in water, salts and, possibly, organics.

In a second study, VIR observations also reveal new information about the variability of Ceres' crust, and suggest recent surface changes, in the form of newly exposed material.

Dawn previously found carbonates, common on the planet's surface, that formed within an ocean. Sodium carbonates, for example, dominate the bright regions in Occator Crater, and material of similar composition has been found at Oxo Crater and Ahuna Mons.

This study, led by Giacomo Carrozzo of the Institute of Astrophysics and Planetary Science, identified 12 sites rich in sodium carbonates and examined in detail several areas of a few square miles that show where water is present as part of the carbonate structure. The study marks the first time hydrated carbonate has been found on the surface of Ceres, or any other planetary body besides Earth, giving us new information about the dwarf planet's chemical evolution.

Water ice is not stable on the surface of Ceres over long time periods unless it is hidden in shadows, as in the case of Juling. Similarly, hydrated carbonate would dehydrate, although over a longer timescale of a few million years.

"This implies that the sites rich in hydrated carbonates have been exposed due to recent activity on the surface," Carrozzo said.

The great diversity of material, ice and carbonates, exposed via impacts, landslides and cryovolcanism suggests Ceres' crust is not uniform in composition. These heterogeneities were either produced during the freezing of Ceres' original ocean - which formed the crust - or later on as a consequence of large impacts or cryovolcanic intrusions.

"Changes in the abundance of water ice on a short timescale, as well as the presence of hydrated sodium carbonates, are further evidence that Ceres is a geologically and chemically active body," said Cristina De Sanctis, VIR team leader at the Institute of Astrophysics and Planetary Science.