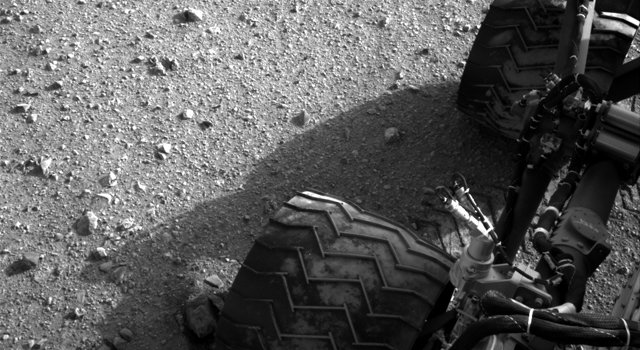 Soil clinging to the right middle and rear wheels of NASA's Mars rover Curiosity can be seen in this image taken by the Curiosity's Navigation Camera after the rover's third drive on Mars.› Full image and caption
Credit: NASA/JPL-Caltech 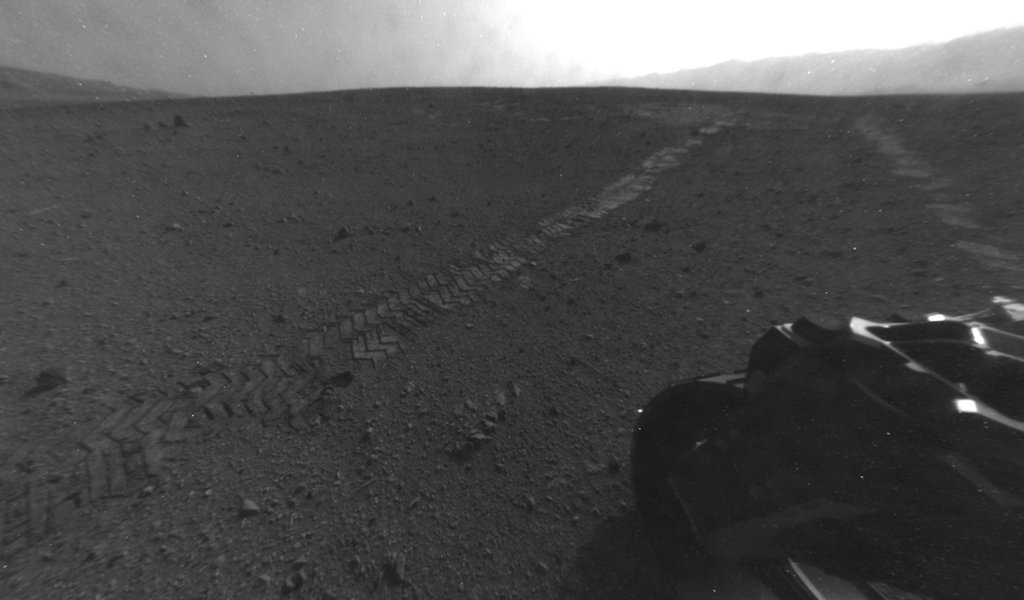 On Aug. 28, 2012, during the 22nd Martian day, or sol, after landing on Mars, NASA's Curiosity rover drove about 52 feet (16 meters) eastward, the longest drive of the mission so far.› Full image and caption
Credit: NASA/JPL-Caltech

NASA's Mars rover Curiosity has set off from its landing vicinity on a trek to a science destination about a quarter mile (400 meters) away, where it may begin using its drill.

PASADENA, Calif. -- NASA's Mars rover Curiosity has set off from its landing vicinity on a trek to a science destination about a quarter mile (400 meters) away, where it may begin using its drill.

The rover drove eastward about 52 feet (16 meters) on Tuesday, its 22nd Martian day after landing. This third drive was longer than Curiosity's first two drives combined. The previous drives tested the mobility system and positioned the rover to examine an area scoured by exhaust from one of the Mars Science Laboratory spacecraft engines that placed the rover on the ground.

"This drive really begins our journey toward the first major driving destination, Glenelg, and it's nice to see some Martian soil on our wheels," said mission manager Arthur Amador of NASA's Jet Propulsion Laboratory in Pasadena, Calif. "The drive went beautifully, just as our rover planners designed it."

Glenelg is a location where three types of terrain intersect. Curiosity's science team chose it as a likely place to find a first rock target for drilling and analysis.

"We are on our way, though Glenelg is still many weeks away," said Curiosity Project Scientist John Grotzinger of the California Institute of Technology in Pasadena. "We plan to stop for just a day at the location we just reached, but in the next week or so we will make a longer stop."

During the longer stop at a site still to be determined, Curiosity will test its robotic arm and the contact instruments at the end of the arm. At the location reached Tuesday, Curiosity's Mast Camera (Mastcam) will collect a set of images toward the mission's ultimate driving destination, the lower slope of nearby Mount Sharp. A mosaic of images from the current location will be used along with the Mastcam images of the mountain taken at the spot where Curiosity touched down, Bradbury Landing. This stereo pair taken about 33 feet (10 meters) apart will provide three-dimensional information about distant features and possible driving routes.

Curiosity is three weeks into a two-year prime mission on Mars. It will use 10 science instruments to assess whether the selected study area ever has offered environmental conditions favorable for microbial life. JPL, a division of Caltech, manages the mission for NASA's Science Mission Directorate in Washington.
More information about Curiosity is online at: http://www.jpl.nasa.gov/msl ,  http://www.nasa.gov/msl and http://mars.jpl.nasa.gov/msl .