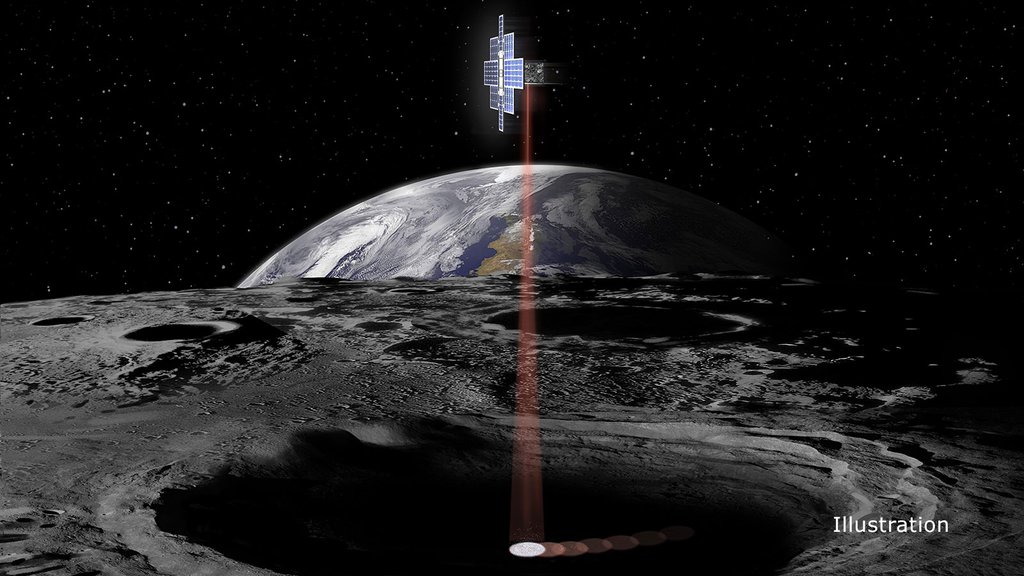 This artist's concept shows the briefcase-sized Lunar Flashlight spacecraft using its near-infrared lasers to shine light into shaded polar regions on the Moon to look for water ice.
Credit: NASA/JPL-Caltech

To support the next wave of human exploration, the Lunar Flashlight mission will look for potential ice hidden at the Moon's South Pole.

As astronauts explore the Moon during the Artemis program, they may need to make use of the resources that already exist on the lunar surface. Take water, for instance: Because it's a heavy and therefore expensive resource to launch from Earth, our future explorers might have to seek out ice to mine. Once excavated, it can be melted and purified for drinking and used for rocket fuel. But how much water is there on the Moon, and where might we find it?

This is where NASA's Lunar Flashlight comes in. About the size of a briefcase, the small satellite - also known as a CubeSat - aims to detect naturally occurring surface ice believed to be at the bottom of craters on the Moon that have never seen sunlight.

"Although we have a pretty good idea there's ice inside the coldest and darkest craters on the Moon, previous measurements have been a little bit ambiguous," said Barbara Cohen, principal investigator of the mission at NASA's Goddard Space Flight Center in Greenbelt, Maryland. "Scientifically, that's fine, but if we're planning on sending astronauts there to dig up the ice and drink it, we have to be sure it exists."

Managed by NASA's Jet Propulsion Laboratory in Southern California, the spacecraft is a technology demonstration: It will seek to achieve several technological firsts, including being the first mission to look for water ice using lasers. It will also be the first planetary spacecraft to use a "green" propellant, a new kind of fuel that is safer to transport and store than the commonly used spacecraft propellant hydrazine.

"A technology demonstration mission like Lunar Flashlight, which is lower cost and fills a specific gap in our knowledge, can help us better prepare for an extended NASA presence on the Moon as well as test key technologies that may be used in future missions," said John Baker, Lunar Flashlight project manager at JPL.

Peering Into the Shadows

Over the course of two months, Lunar Flashlight will swoop low over the Moon's South Pole to shine its lasers into permanently shadowed regions and probe for surface ice. Found near the North and South Poles, these dark craters are thought to be "cold traps" that accumulate molecules of different ices, including water ice. The molecules may have come from comet and asteroid material impacting the lunar surface and from solar wind interactions with the lunar soil.

"The Sun moves around the crater horizon but never actually shines into the crater," said Cohen, whose team includes scientists at the University of California, Los Angeles, Johns Hopkins Applied Physics Laboratory and the University of Colorado. "Because these craters are so cold, these molecules never receive enough energy to escape, so they become trapped and accumulate over billions of years."

Lunar Flashlight's four-laser reflectometer will use near-infrared wavelengths that are readily absorbed by water to identify any accumulations of ice on the surface. Should the lasers hit bare rock as they shine into the South Pole's permanently shadowed regions, their light will reflect back to the spacecraft, signaling a lack of ice. But if the light is absorbed, it would mean these dark pockets do indeed contain ice. The greater the absorption, the more widespread ice may be at the surface.

While the CubeSat can provide information only about the presence of ice on the surface, and not below it, Lunar Flashlight seeks to fill a critical gap in our understanding of how much water ice these regions possess. "We will also be able to compare the Lunar Flashlight data with the great data that we already have from other Moon-orbiting missions to see if there are correlations in signatures of water ice, thereby giving us a global view of surface ice distribution," added Cohen.

The mission is detailed in a new paper published in the April 2020 issue of IEEE Aerospace and Electronic Systems Magazine.

Lunar Flashlight is funded by the Small Spacecraft Technology program within NASA's Space Technology Mission Directorate. The program is based at NASA's Ames Research Center in California's Silicon Valley. It will be one of 13 secondary payloads aboard the Artemis I mission, the first integrated flight test of NASA's Deep Space Exploration Systems, including the Orion spacecraft and Space Launch System (SLS) rocket launching from the newly upgraded Exploration Ground Systems at Kennedy Space Center in Florida.

Under the Artemis program, astronauts and robots will explore more of the Moon than ever before. Robotic missions begin with commercial lunar deliveries in 2021, humans return in 2024, and the agency will establish sustainable lunar exploration by the end of the decade. We will use what we learn on the Moon to prepare to send astronauts to Mars.