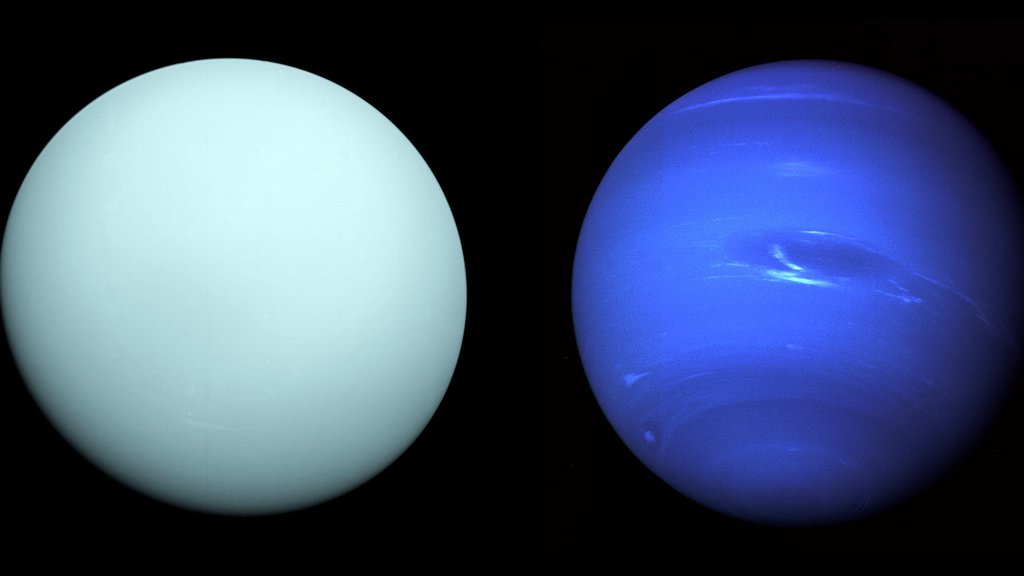 Left: Arriving at Uranus in 1986, Voyager 2 observed a bluish orb with subtle features. A haze layer hid most of the planet's cloud features from view. Right: This image of Neptune was produced from Voyager 2 and shows the Great Dark Spot and its companion bright smudge. Credits: Left: NASA/JPL-Caltech - Right: NASA 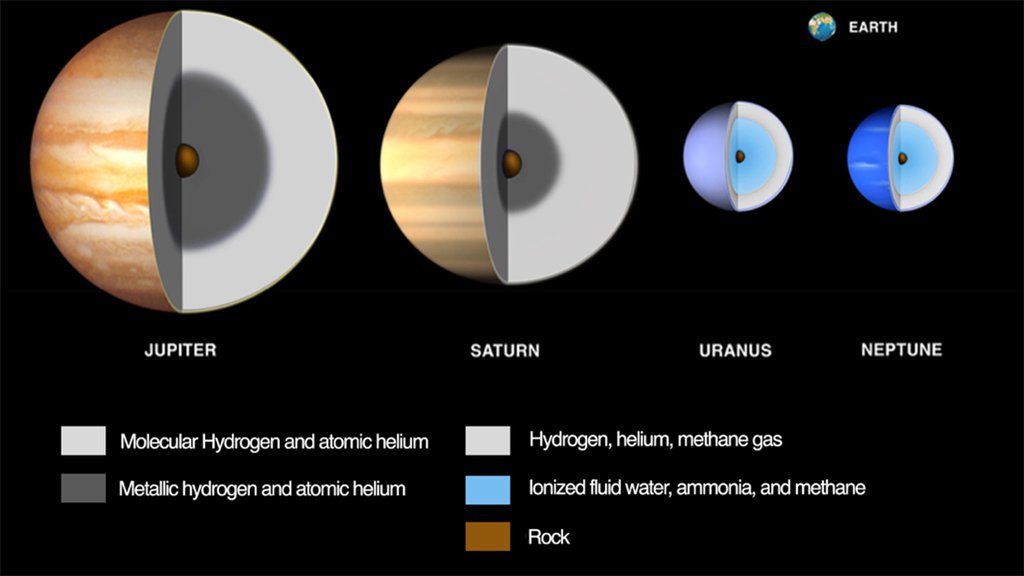 Illustration of compositional differences among the giant planets and their relative sizes. Earth is shown for comparison. Jupiter and Saturn are primarily made of hydrogen and helium, the terrestrial planets are almost pure rock, while Uranus and Neptune are thought to be largely supercritical liquid water. Credits: JPL/Caltech, based on material from the Lunar and Planetary Institute

NASA has released a study of potential future missions to Uranus and Neptune -- part of a series of NASA studies in support of the next Planetary Science Decadal Survey.

A NASA-led and NASA-sponsored study of potential future missions to the mysterious "ice giant" planets Uranus and Neptune has been released -- the first in a series of mission studies NASA will conduct in support of the next Planetary Science Decadal Survey. The results of this and future studies will be used as the Decadal Survey deliberates on NASA's planetary science priorities from 2022-2032. The study identifies the scientific questions an ice giant mission should address, and discusses various instruments, spacecraft, flight-paths and technologies that could be used.

"This study argues the importance of exploring at least one of these planets and its entire environment, which includes surprisingly dynamic icy moons, rings and bizarre magnetic fields," said Mark Hofstadter of NASA's Jet Propulsion Laboratory in Pasadena, California, one of the two co-chairs of the science team that produced the report. The European Space Agency (ESA) also participated in the study.

To date, Uranus and Neptune have been visited briefly by one spacecraft, Voyager 2. Voyager rapidly flew by Uranus in 1986 and Neptune in 1989, as part of its grand tour of discovery that previously took it by Jupiter and Saturn.

Said co-chair Amy Simon of NASA's Goddard Space Flight Center in Greenbelt, Maryland, "We do not know how these planets formed and why they and their moons look the way they do. There are fundamental clues as to how our solar system formed and evolved that can only be found by a detailed study of one, or preferably both, of these planets."

A variety of potential mission concepts are discussed in the study, including orbiters, flybys and probes that would dive into Uranus' atmosphere to study its composition. A narrow-angle camera would send data back to Earth about the ice giants and their moons. Uranus has 27 known moons, while Neptune has 14.

Collectively, Uranus and Neptune are referred to as ice giant planets. In spite of that name, relatively little solid ice is thought to be in them today, but it is believed there is a massive liquid ocean beneath their clouds, which accounts for about two-thirds of their total mass. This makes them fundamentally different from the gas giant planets, Jupiter and Saturn (which are approximately 85 percent gas by mass), and terrestrial planets like Earth or Mars, which are basically 100 percent rock. It's not clear how or where ice giant planets form, why their magnetic fields are strangely oriented, and what drives geologic activity on some of their moons. These mysteries make them scientifically important, and this importance is enhanced by the discovery that many planets around other stars appear to be similar to our own ice giants.

It is now up to the next decadal survey to recommend science priorities for NASA for the next decade. NASA will then determine if and when to fly a mission that is responsive to those priorities.

The full study (529 pages), as well as a short summary are available at: