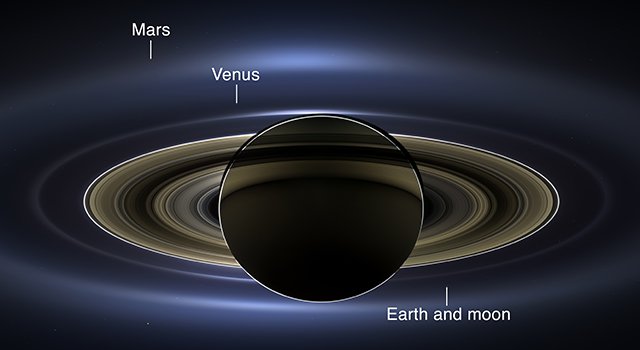 On July 19, 2013, in an event celebrated the world over, NASA's Cassini spacecraft slipped into Saturn's shadow and turned to image the planet, seven of its moons, its inner rings -- and, in the background, our home planet, Earth.› Full image and caption
Credit: NASA/JPL-Caltech/SSI 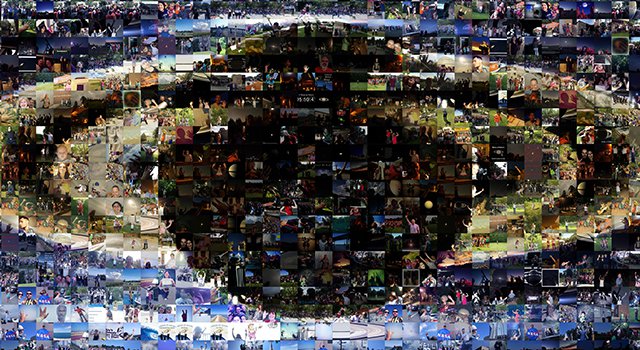 This collage includes about 1,600 images submitted by members of the public as part of the NASA Cassini mission's "Wave at Saturn" campaign.› Full image and caption
Credit: NASA/JPL-Caltech/SSI

- Natural-color portrait that is first to show Saturn, its moons and rings, plus Earth, Venus and Mars

- Sweeps nearly 405,000 miles across Saturn and its inner rings

The new panoramic mosaic of the majestic Saturn system taken by NASA's Cassini spacecraft, which shows the view as it would be seen by human eyes, was unveiled at the Newseum in Washington on Tuesday.

Cassini's imaging team processed 141 wide-angle images to create the panorama. The image sweeps 404,880 miles (651,591 kilometers) across Saturn and its inner ring system, including all of Saturn's rings out to the E ring, which is Saturn's second outermost ring. For perspective, the distance between Earth and our moon would fit comfortably inside the span of the E ring.

"In this one magnificent view, Cassini has delivered to us a universe of marvels," said Carolyn Porco, Cassini's imaging team lead at the Space Science Institute in Boulder, Colo. "And it did so on a day people all over the world, in unison, smiled in celebration at the sheer joy of being alive on a pale blue dot."

The mosaic is part of Cassini's "Wave at Saturn" campaign, where on July 19, people for the first time had advance notice a spacecraft was taking their picture from planetary distances. NASA invited the public to celebrate by finding Saturn in their part of the sky, waving at the ringed planet and sharing pictures over the Internet.

An annotated version of the Saturn system mosaic labels points of interest. Earth is a bright blue dot to the lower right of Saturn. Venus is a bright dot to Saturn's upper left. Mars also appears, as a faint red dot, above and to the left of Venus. Seven Saturnian moons are visible, including Enceladus on the left side of the image. Zooming into the image reveals the moon and the icy plume emanating from its south pole, supplying fine, powder-sized icy particles that make up the E ring.

The E ring shines like a halo around Saturn and the inner rings. Because it is so tenuous, it is best seen with light shining from behind it, when the tiny particles are outlined with light because of the phenomenon of diffraction. Scientists who focus on Saturn's rings look for patterns in optical bonanzas like these. They use computers to increase dramatically the contrast of the images and change the color balance, for example, to see evidence for material tracing out the full orbits of the tiny moons Anthe and Methone for the first time.

"This mosaic provides a remarkable amount of high-quality data on Saturn's diffuse rings, revealing all sorts of intriguing structures we are currently trying to understand," said Matt Hedman, a Cassini participating scientist at the University of Idaho in Moscow. "The E ring in particular shows patterns that likely reflect disturbances from such diverse sources as sunlight and Enceladus' gravity."

Cassini does not attempt many images of Earth because the sun is so close to our planet that an unobstructed view would damage the spacecraft's sensitive detectors. Cassini team members looked for an opportunity when the sun would slip behind Saturn from Cassini's point of view. A good opportunity came on July 19, when Cassini was able to capture a picture of Earth and its moon, and this multi-image, backlit panorama of the Saturn system.

"With a long, intricate dance around the Saturn system, Cassini aims to study the Saturn system from as many angles as possible," said Linda Spilker, Cassini project scientist based at NASA's Jet Propulsion Laboratory in Pasadena, Calif. "Beyond showing us the beauty of the Ringed Planet, data like these also improve our understanding of the history of the faint rings around Saturn and the way disks around planets form -- clues to how our own solar system formed around the sun."

Launched in 1997, Cassini has explored the Saturn system for more than nine years. NASA plans to continue the mission through 2017, with the anticipation of many more images of Saturn, its rings and moons, as well as other scientific data.

The Cassini-Huygens mission is a cooperative project of NASA, the European Space Agency and the Italian Space Agency. JPL, a division of the California Institute of Technology, Pasadena, manages the mission for NASA's Science Mission Directorate in Washington. JPL designed, developed and assembled the Cassini orbiter and its two onboard cameras. The imaging team is based at the Space Science Institute, Boulder, Colo.

To view the image, visit: http://www.jpl.nasa.gov/spaceimages/details.php?id=PIA17172 .

A new version of the collage of photos shared by the public, with the Saturn system as backdrop, is available at: http://www.jpl.nasa.gov/spaceimages/details.php?id=PIA17679 .