NASA Cassini Images May Reveal Birth of a Saturn Moon 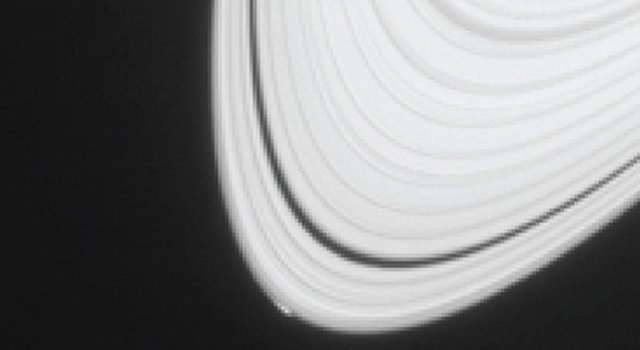 The disturbance visible at the outer edge of Saturn's A ring in this image from NASA's Cassini spacecraft results from gravitational effects on ring particles by an object that may be replaying the birth process of icy moons. Cassini's narrow-angle camera recorded this view on April 15, 2013.› Full image and caption

NASA's Cassini spacecraft has documented the formation of a small icy object within the rings of Saturn that may be a new moon and may also provide other clues.

NASA's Cassini spacecraft has documented the formation of a small icy object within the rings of Saturn that may be a new moon, and may also provide clues to the formation of the planet's known moons.

Images taken with Cassini's narrow angle camera on April 15, 2013, show disturbances at the very edge of Saturn's A ring -- the outermost of the planet's large, bright rings. One of these disturbances is an arc about 20 percent brighter than its surroundings, 750 miles (1,200 kilometers) long and 6 miles (10 kilometers) wide. Scientists also found unusual protuberances in the usually smooth profile at the ring's edge. Scientists believe the arc and protuberances are caused by the gravitational effects of a nearby object. Details of the observations were published online today (April 14, 2014) by the journal Icarus.

The object is not expected to grow any larger, and may even be falling apart. But the process of its formation and outward movement aids in our understanding of how Saturn's icy moons, including the cloud-wrapped Titan and ocean-holding Enceladus, may have formed in more massive rings long ago. It also provides insight into how Earth and other planets in our solar system may have formed and migrated away from our star, the sun.

"We have not seen anything like this before," said Carl Murray of Queen Mary University of London, the report's lead author. "We may be looking at the act of birth, where this object is just leaving the rings and heading off to be a moon in its own right."

The object, informally named Peggy, is too small to be seen in images so far. Scientists estimate it is probably no more than about a half mile (about a kilometer) in diameter. Saturn's icy moons range in size depending on their proximity to the planet -- the farther from the planet, the larger. And many of Saturn's moons are composed primarily of ice, as are the particles that form Saturn's rings. Based on these facts, and other indicators, researchers recently proposed that the icy moons formed from ring particles and then moved outward, away from the planet, merging with other moons on the way.

"Witnessing the possible birth of a tiny moon is an exciting, unexpected event," said Cassini Project Scientist Linda Spilker, of NASA's Jet Propulsion Laboratory in Pasadena, Calif. According to Spilker, Cassini's orbit will move closer to the outer edge of the A ring in late 2016 and provide an opportunity to study Peggy in more detail and perhaps even image it.

It is possible the process of moon formation in Saturn's rings has ended with Peggy, as Saturn's rings now are, in all likelihood, too depleted to make more moons. Because they may not observe this process again, Murray and his colleagues are wringing from the observations all they can learn.

"The theory holds that Saturn long ago had a much more massive ring system capable of giving birth to larger moons," Murray said. "As the moons formed near the edge, they depleted the rings and evolved, so the ones that formed earliest are the largest and the farthest out."

The Cassini-Huygens mission is a cooperative project of NASA, the European Space Agency and the Italian Space Agency. JPL, a division of the California Institute of Technology, manages the mission for NASA's Science Mission Directorate in Washington.

To view an image of the Saturn ring disturbance attributed to the new moon, visit: http://www.jpl.nasa.gov/spaceimages/details.php?id=PIA18078

For more information about Cassini, visit these sites: http://www.nasa.gov/cassini http://saturn.jpl.nasa.gov