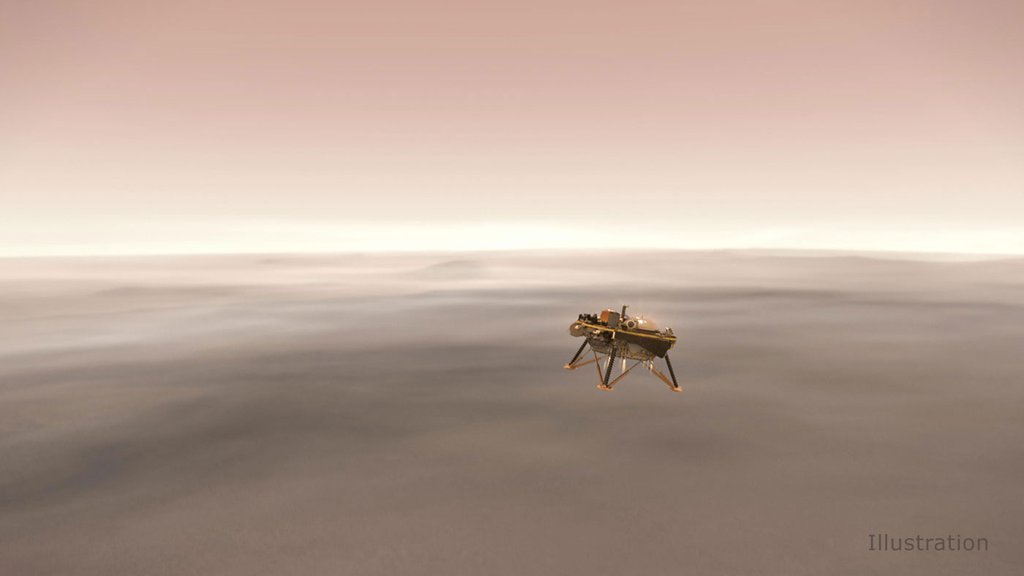 Illustration showing a simulated view of NASA's InSight lander firing retrorockets as it descends toward the surface of Mars.› Full image and caption
Credit: NASA/JPL-Caltech

NASA's InSight lander is scheduled to touch down on the Red Planet at approximately noon PST on Nov. 26, with a new suite of instruments to probe below the Martian surface.

NASA's Mars Interior Exploration using Seismic Investigations, Geodesy and Heat Transport (InSight) lander is scheduled to touch down on the Red Planet at approximately noon PST (3 p.m. EST) on Nov. 26, and viewers everywhere can watch coverage of the event live on NASA Television, the agency's website and social media platforms.

Launched on May 5, InSight marks NASA's first Mars landing since the Curiosity rover in 2012. The landing will kick off a two-year mission in which InSight will become the first spacecraft to study Mars' deep interior. Its data also will help scientists understand the formation of all rocky worlds, including our own.

InSight is being followed to Mars by two miniature NASA spacecraft, jointly called Mars Cube One (MarCO), the first deep-space mission for CubeSats. If MarCO makes its planned Mars flyby, it will attempt to relay data from InSight as it enters the planet's atmosphere and lands.

InSight and MarCO flight controllers will monitor the spacecraft's entry, descent and landing from Mission Control at JPL.

All NASA TV news conferences will be available on the agency's website at www.nasa.gov/live. Briefing times and speakers are subject to change. The public may ask questions on social media during the events by tagging them with #askNASA.

To watch news conferences and commentary online, you can also visit:

Public Viewing Parties Around the World

About 80 live viewing events for the public to watch the InSight landing will be held worldwide. Major viewing locations include:

--Denver Museum of Nature and Science

--For a complete list of landing event watch parties, go to: https://mars.nasa.gov/insight/timeline/landing/watch-in-person/

*These venues will have NASA representatives

An InSight landing press kit is available at:

For more detailed information on the InSight mission, visit: