Engineers at NASA’s JPL dropped this prototype to learn how a future Sample Return Lander could safely touch down on Mars as part of the Mars Sample Return campaign to bring Martian samples back to Earth for closer study.

Engineers are developing the crucial hardware needed for a series of daring space missions that will be carried out in the coming decade.

Testing has already begun on what would be the most sophisticated endeavor ever attempted at the Red Planet: bringing rock and sediment samples from Mars to Earth for closer study.

The multi-mission Mars Sample Return campaign began when NASA’s Perseverance rover landed on Mars this past February to collect Martian rock samples in search of ancient microscopic life. Out of Perseverance’s 43 sample tubes, four have been filled with rock cores and one with Martian atmosphere. Mars Sample Return seeks to bring select tubes back to Earth, where generations of scientists will be able to study them with powerful lab equipment far too large to send to Mars.

Getting those samples into terrestrial labs would take a decade and involve European partners and multiple NASA centers. ESA (the European Space Agency) is developing a rover for the effort, with engineers at NASA’s Glenn Research Center in Cleveland, Ohio, designing its wheels. The rover would transfer samples to a lander, being developed at NASA’s Jet Propulsion Laboratory in Southern California, that would use a robotic arm (developed by ESA) to pack the samples into a small rocket, called a Mars Ascent Vehicle, being designed by NASA’s Marshall Space Flight Center in Huntsville, Alabama.

Teams across multiple NASA centers and the European Space Agency are working together to prepare a set of missions that would return the samples being collected by the Mars Perseverance rover safely back to Earth. This video features some of that prototype testing underway for the proposed Sample Retrieval Lander, Mars Ascent Vehicle launch systems, and the Earth Entry System.

The rocket would launch from the lander to deliver the sample capsule to an ESA spacecraft orbiting Mars. Inside the orbiter, the capsule would be prepared for delivery to Earth by hardware that a team led by NASA’s Goddard Space Flight Center in Greenbelt, Maryland, is developing. This preparation would include sealing the sample capsule within a clean container to trap any Martian material inside, sterilizing the seal, and placing the sealed container into an Earth-entry capsule before the return trip to Earth.

To develop the lander, as well as the system that would help launch the sample-laden rocket from it, engineers at NASA’s JPL are drawing from a long history of Mars exploration: JPL has led nine successful Mars landings, including rovers and stationary landers. But the Sample Retrieval Lander would be the largest, heaviest spacecraft of its type to ever go to Mars, and the Mars Ascent Vehicle launching from it would be the first rocket ever fired off another planet.

This is where the testing comes in.

To carry and launch the Mars Ascent Vehicle, the lander needs to be a sturdy platform, weighing about 5,291 pounds (2,400 kilograms) – almost twice as heavy as Perseverance, which was lowered to the Martian surface with cables from a rocket-powered jet pack. The Sample Retriever Lander wouldn’t have a jet pack; its legs would have to absorb the impact of touchdown, relying on retrorockets to slow its descent, similar to recent Mars lander missions like InSight and Phoenix. 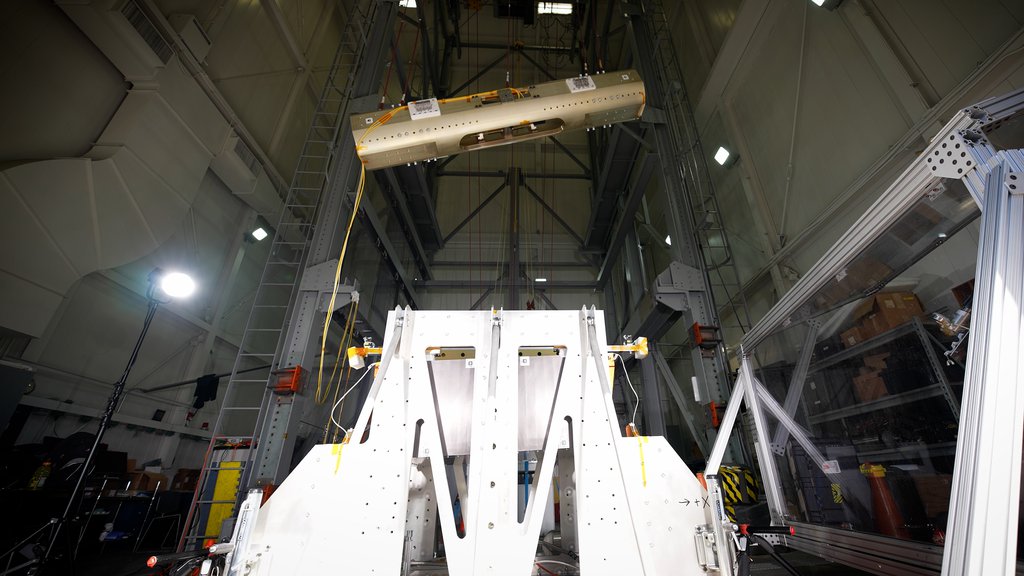 A mock rocket is thrown into the air at NASA’s Jet Propulsion Laboratory during tests of a launch system that would fire a rocket off of Mars. The rocket would be part of a multi-mission effort to return Martian samples back to Earth for closer study. Credit: NASA/JPL-Caltech

That’s why Pavlina Karafillis has been dropping a prototype lander – repeatedly – in a warehouse-like space at JPL. As test engineer for the Sample Retrieval Lander’s legs, she and her colleagues have been using high-speed cameras to observe this prototype’s legs slam onto a base. QR-code-like marks on each of the prototype’s “feet” help the cameras track the legs’ motion. The team uses slow-motion video to continually update their computer models, which help them understand how energy would be dispersed throughout the lander.

“The last step of the journey is really important,” Karafillis said. “There’s all kinds of landing conditions you have to take into account, like rocks, or really soft sand, or coming in at an angle. This is why we have to do all this testing.”

Karafillis and her colleagues have started with a prototype roughly one-third the size of what the actual spacecraft would be; a lighter prototype is one way to learn how the final lander design would move in Mars’ low gravity. Later in the program, they will drop a full-scale lander, as well.

Surviving landing is just part of the challenge: Safely launching the nine-foot-long (2.8-meter-long) two-stage rocket that will sit atop the lander’s deck adds another level of difficulty. Mars’ gravity is one-third that of Earth’s, and the rocket’s weight, combined with its exhaust, could cause the lander to slip or tilt.

So engineers have conceived of a system to toss the rocket into the air just before it ignites. The whole process happens in a finger-snap, tossing the rocket at a rate of 16 feet (5 meters) per second.

During testing, a cradle equipped with gas-powered pistons flung an 881-pound (400-kilogram) mock rocket 11 feet (3.3 meters) in the air; cables suspended from a tower 44 feet (13 meters) high offloaded more than half of the test article’s weight to simulate Martian gravity.

“It’s kind of like being on a really fast roller coaster when someone hits the breaks,” said Chris Chatellier, the system’s lead engineer at JPL. “There are a lot of safety aspects to consider. Testing happens in a very controlled sequence of events with everyone outside of the building.”

This system, known as Vertically Ejected Controlled Tip-off Release (VECTOR) system, also adds a slight rotation during launch, which pitches the rocket up and away from the Martian surface.

“Launching with VECTOR means the lander could be oriented the wrong way on a slope, and we could still pull this off,” Chatellier said.

Chatellier and his team have conducted 23 tests this year, changing the rocket’s mass and center of gravity along the way. They also added springs to the bottom of their lander stand-in, watching how much “bounce” the launch system created. Next year, they’ll toss a heavier rocket even higher.

“We’re on the right path,” Chatellier said. “Our analysis and predicted models were very close to what we saw in the tests.”

NASA’s Mars Sample Return (MSR) will revolutionize our understanding of Mars by returning scientifically-selected samples for study using the most sophisticated instruments around the world. The mission will fulfill a solar system exploration goal, a high priority since 1980 and the last two National Academy of Sciences Planetary Decadal Surveys.

This strategic partnership of NASA and ESA (European Space Agency) will be the first mission to return samples from another planet, including the first launch and return from the surface of another planet. These samples collected by Perseverance during its exploration of an ancient river-delta are thought to be the best opportunity to reveal the early evolution of Mars, including the potential for life.