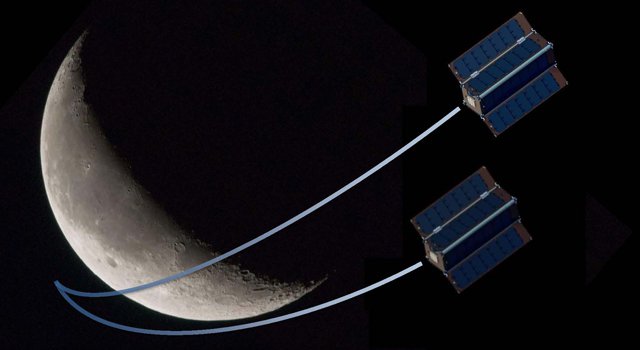 Artist's concept of the Interplanetary NanoSpacecraft Pathfinder In Relevant Environment (INSPIRE) CubeSat project. The dual INSPIRE CubeSats, the world's first CubeSats to be launched beyond Earth orbit, will demonstrate functionality, communication, navigation and payload hosting in interplanetary space. INSPIRE is a NASA JPL partnership with the University of Michigan, Ann Arbor; Cal Poly San Luis Obispo; and the University of Texas at Austin, in collaboration with Goldstone-Apple Valley Radio Telescope.
Credit: NASA/JPL-Caltech

NASA has selected 24 small satellites, including three from NASA's Jet Propulsion Laboratory, to fly as payloads aboard rockets planned to launch in 2014, 2015 and 2016.

PASADENA, Calif. - NASA has selected 24 small satellites, including three from NASA's Jet Propulsion Laboratory in Pasadena, Calif., to fly as auxiliary payloads aboard rockets planned to launch in 2014, 2015 and 2016. The proposed CubeSats come from universities across the country, a Florida high school, several non-profit organizations and NASA field centers.

CubeSats belong to a class of research spacecraft called nanosatellites. The cube-shaped satellites measure about 4 inches (10 centimeters) on each side, have a volume of about 1 quart (1 liter), and weigh less than 3 pounds (1.1 kilograms).

The selections are from the fourth round of the CubeSat Launch Initiative. After launch, the satellites will conduct technology demonstrations, educational research or science missions. The selected CubeSats will be eligible for flight after final negotiations and an opportunity for flight becomes available.

The three CubeSats from JPL, which is managed for NASA by the California Institute of Technology in Pasadena, are:

--The Integrated Solar Array and Reflectarray Antenna (ISARA), a technology demonstration of a practical, low-cost Ka-band high-gain antenna on a 3U CubeSat that will increase downlink data rates from a baseline of 9.6 kilobits per second to more than 100 megabits per second with minimal impact on spacecraft mass, volume, cost and power requirements.

--The CubeSat VHF transmitter to study Ionospheric dispersion of Radio Pulses (CHIRP), a 6U CubeSat designed to provide measurements of very high frequency (VHF) radio pulses propagated through the ionosphere that will be essential to the development of SWORD, a future explorer class charged-particle astronomical observatory.

--The Interplanetary NanoSpacecraft Pathfinder In Relevant Environment (INSPIRE) project, which will open deep-space heliophysics and planetary science to the CubeSat community by demonstrating functionality, communication, navigation and payload-hosting in interplanetary space on dual 3U CubeSats.

In the three previous rounds of the CubeSat initiative, NASA has selected 63 missions for flight. The agency's Launch Services Program Educational Launch of Nanosatellite (ELaNa) Program has launched 12 CubeSat missions. This year, 22 CubeSat missions are scheduled for flight.