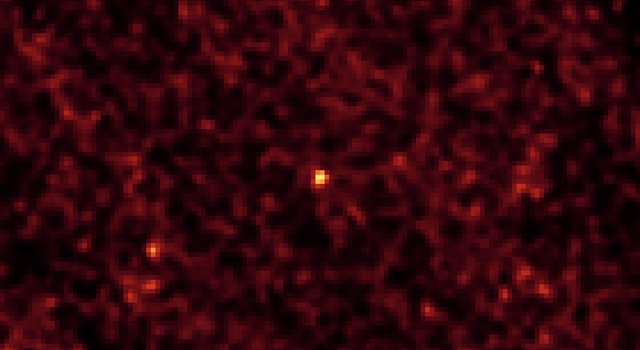 Observations from NASA's Spitzer Space Telescope reveal new information about the structure of 2011 MD, a small asteroid being considered by NASA for its proposed Asteroid Redirect Mission, or ARM.› Full image and caption
Credit: NASA/JPL-Caltech

NASA is on the hunt for an asteroid to capture with a robotic spacecraft, redirect to a stable orbit around the moon, and send astronauts to study in the 2020s.

NASA is on the hunt for an asteroid to capture with a robotic spacecraft, redirect to a stable orbit around the moon, and send astronauts to study in the 2020s -- all on the agency's human Path to Mars. Agency officials announced on Thursday, June 19, recent progress to identify candidate asteroids for its Asteroid Redirect Mission (ARM), increase public participation in the search for asteroids, and advance the mission's design.

NASA plans to launch the ARM robotic spacecraft in 2019 and will make a final choice of the asteroid for the mission about a year before the spacecraft launches. NASA is working on two concepts for the mission: The first is to fully capture a very small asteroid in open space, and the second is to collect a boulder-sized sample off of a much larger asteroid. Both concepts would require redirecting an asteroid less than 32 feet (10 meters) in size into the moon's orbit. The agency will choose between these two concepts in late 2014 and further refine the mission's design.

The agency will award a total of $4.9 million for concept studies addressing components of ARM. Proposals for the concept studies were solicited through a Broad Agency Announcement (BAA) released in March, and selected in collaboration with NASA's Space Technology and Human Exploration and Operations Mission Directorates. The studies will be completed over a six-month period beginning in July, during which time system concepts and key technologies needed for ARM will be refined and matured. The studies also will include an assessment of the feasibility of potential commercial partners to support the robotic mission.

"With these system concept studies, we are taking the next steps to develop capabilities needed to send humans deeper into space than ever before, and ultimately to Mars, while testing new techniques to protect Earth from asteroids," said William Gerstenmaier, associate administrator for NASA's Human Exploration and Operations Mission Directorate.

For more information about the BAA and award recipients, visit:

NASA's Spitzer Space Telescope made recent observations of an asteroid designated 2011 MD, which bears the characteristics of a good candidate for the full capture concept. While NASA will continue to look for other candidate asteroids during the next few years as the mission develops, astronomers are making progress to find suitable candidate asteroids for humanity's next destination into the solar system.

"Observing these elusive remnants that may date from the formation of our solar system as they come close to Earth is expanding our understanding of our world and the space it resides in," said John Grunsfeld, associate administrator for NASA's Science Mission Directorate. "Closer study of these objects challenges our capabilities for future exploration and will help us test ways to protect our planet from impact. The Spitzer observatory is one of our tools to identify and characterize potential candidate targets for the asteroid mission."

Analysis of Spitzer's infrared data shows 2011 MD is roughly 20 feet (6 meters) in size and has a remarkably low density -- about the same as water, which supports the analysis of observations taken in 2011.

The asteroid appears to have a structure perhaps resembling a pile of rocks, or a "rubble pile." Since solid rock is about three times as dense as water, this suggests about two-thirds of the asteroid must be empty space. The research team behind the observation says the asteroid could be a collection of small rocks, held loosely together by gravity, or it may be one solid rock with a surrounding halo of small particles. In both cases, the asteroid mass could be captured by the ARM capture mechanism and redirected into lunar orbit.

The findings based on the Spitzer observation were published Thursday in the Astrophysical Journal Letters. For more information, visit:

To date, nine asteroids have been identified as potential candidates for the mission, having favorable orbits and measuring the right size for the ARM full capture option. With these Spitzer findings on 2011 MD, sizes now have been established for three of the nine candidates. Another asteroid -- 2008 HU4 -- will pass close enough to Earth in 2016 for interplanetary radar to determine some of its characteristics, such as size, shape and rotation. The other five will not get close enough to be observed again before the final mission selection, but NASA's Near-Earth Object (NEO) Program is finding several potential candidate asteroids per year. One or two of these get close enough to Earth each year to be well characterized.

Boulders have been directly imaged on all larger asteroids visited by spacecraft so far, making retrieval of a large boulder a viable concept for ARM. During the next few years, NASA expects to add several candidates for this option, including asteroid Bennu, which will be imaged up close by the agency's Origins-Spectral Interpretation-Resource Identification-Security-Regolith Explorer (OSIRIS-REx) mission in 2018.

NASA's search for candidate asteroids for ARM is a component of the agency's existing efforts to identify all NEOs that could pose a threat to the Earth. Some of these NEOs could become candidates for ARM because they are in orbits similar to Earth's. More than 11,140 NEOs have been discovered as of June 9. Approximately 1,483 of those have been classified as potentially hazardous.

In June 2013, NASA announced an Asteroid Grand Challenge (AGC) to accelerate this observation work through non-traditional collaborations and partnerships. On the first anniversary of the grand challenge this week, NASA officials announced new ways the public can contribute to the Asteroid Grand Challenge, building on the successes of the challenge to date. To that end, NASA will host a two-day virtual workshop -- dates to be determined -- on emerging opportunities through the grand challenge, in which the public can participate.

"There are great ways for the public to help with our work to identify potentially hazardous asteroids," said Jason Kessler, program executive for NASA's Asteroid Grand Challenge. "By tapping into the innovative spirit of people around the world, new public-private partnerships can help make Earth a safer place, and perhaps even provide valuable information about the asteroid that astronauts will visit."

For more information about the workshop and public opportunities through the grand challenge, visit: