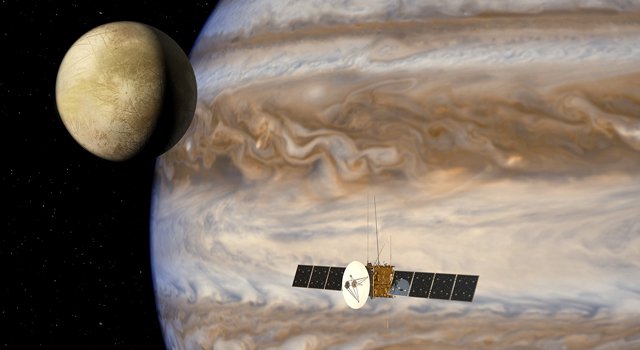 NASA has selected key contributions to a 2022 European Space Agency mission to study Jupiter and three of its largest moons.

NASA has selected key contributions to a 2022 European Space Agency (ESA) mission that will study Jupiter and three of its largest moons in unprecedented detail. The moons are thought to harbor vast water oceans beneath their icy surfaces.

Under the lead of Bruzzone and the Italian Space Agency, JPL will provide the transmitter and receiver hardware for a radar sounder designed to penetrate the icy crust of Jupiter's moons Europa, Ganymede and Callisto to a depth of about 5 miles (9 kilometers). This will allow scientists to see for the first time the underground structure of these tectonically complex and unique icy worlds.

JUICE will carry 11 experiments developed by scientific teams from 15 European countries, the United States and Japan.

The spacecraft will orbit Jupiter for three years and travel past Callisto and Europa multiple times, then orbit Ganymede, a moon larger than the planet Mercury. JUICE will conduct the first thorough exploration of Jupiter since NASA's Galileo mission from 1989-2003.

By studying the Jupiter system, JUICE will look to learn more about the formation and evolution of potentially habitable worlds in our solar system and beyond.

"NASA is thrilled to collaborate with ESA on this exciting mission to explore Jupiter and its icy moons," said John Grunsfeld, NASA's associate administrator for science in Washington. "Working together with ESA and our other international partners is key to enabling future scientific progress in our quest to understand the cosmos."

The solar-powered spacecraft will carry cameras and spectrometers, a laser altimeter and an ice-penetrating radar instrument. The mission also will carry a magnetometer, plasma and particle monitors, and radio science hardware. The spacecraft is scheduled to arrive at the Jupiter system in 2030.

"The selection of JUICE's instruments is a key milestone in ESA's flagship mission to the outer solar system, which represents an unprecedented opportunity to showcase leading European technological and scientific expertise," said Alvaro Gimenez Canete, ESA's director of science and robotic exploration.

NASA invited researchers in 2012 to submit proposals for NASA-provided instruments for the mission. Nine were reviewed, with one selected to fly. NASA agreed to provide critical hardware for two of the 10 selected European-led instruments. NASA's total contribution to the JUICE mission is $100 million for design, development and operation of the instruments through 2033.

In addition to the radar team and instrument, the NASA contributions are:

-- Ultraviolet Spectrometer: The principal investigator is Randy Gladstone of Southwest Research Institute in San Antonio. This spectrometer will acquire images to explore the surfaces and atmospheres of Jupiter's icy moons and how they interact with the Jupiter environment. The instrument also will determine how Jupiter's upper atmosphere interacts with its lower atmosphere below, and the ionosphere and magnetosphere above. The instrument will provide images of the aurora on Jupiter and Ganymede.

-- Particle Environment Package: The principal investigator is Stas Barabash of the Swedish Institute of Space Physics. The U.S. lead is Pontus Brandt of the Johns Hopkins University Applied Physics Laboratory (APL) in Laurel, Md. Under the lead of Barabash and the Swedish National Space Board, APL will provide instruments to this suite to measure the neutral material and plasma that are accelerated and heated to extreme levels in Jupiter's fierce and complex magnetic environment.

For more information about the JUICE mission, visit: http://sci.esa.int/juice .