Images of Occator Crater, seen in false-color, were pieced together to create this animated view.

Data from NASA's recent Dawn mission answers two long-unresolved questions: Is there liquid inside Ceres, and how long ago was the dwarf planet geologically active?

NASA's Dawn spacecraft gave scientists extraordinary close-up views of the dwarf planet Ceres, which lies in the main asteroid belt between Mars and Jupiter. By the time the mission ended in October 2018, the orbiter had dipped to less than 22 miles (35 kilometers) above the surface, revealing crisp details of the mysterious bright regions Ceres had become known for.

Scientists had figured out that the bright areas were deposits made mostly of sodium carbonate - a compound of sodium, carbon, and oxygen. They likely came from liquid that percolated up to the surface and evaporated, leaving behind a highly reflective salt crust. But what they hadn't yet determined was where that liquid came from.

By analyzing data collected near the end of the mission, Dawn scientists have concluded that the liquid came from a deep reservoir of brine, or salt-enriched water. By studying Ceres' gravity, scientists learned more about the dwarf planet's internal structure and were able to determine that the brine reservoir is about 25 miles (40 kilometers) deep and hundreds of miles wide.

Ceres doesn't benefit from internal heating generated by gravitational interactions with a large planet, as is the case for some of the icy moons of the outer solar system. But the new research, which focuses on Ceres' 57-mile-wide (92-kilometer-wide) Occator Crater - home to the most extensive bright areas - confirms that Ceres is a water-rich world like these other icy bodies. 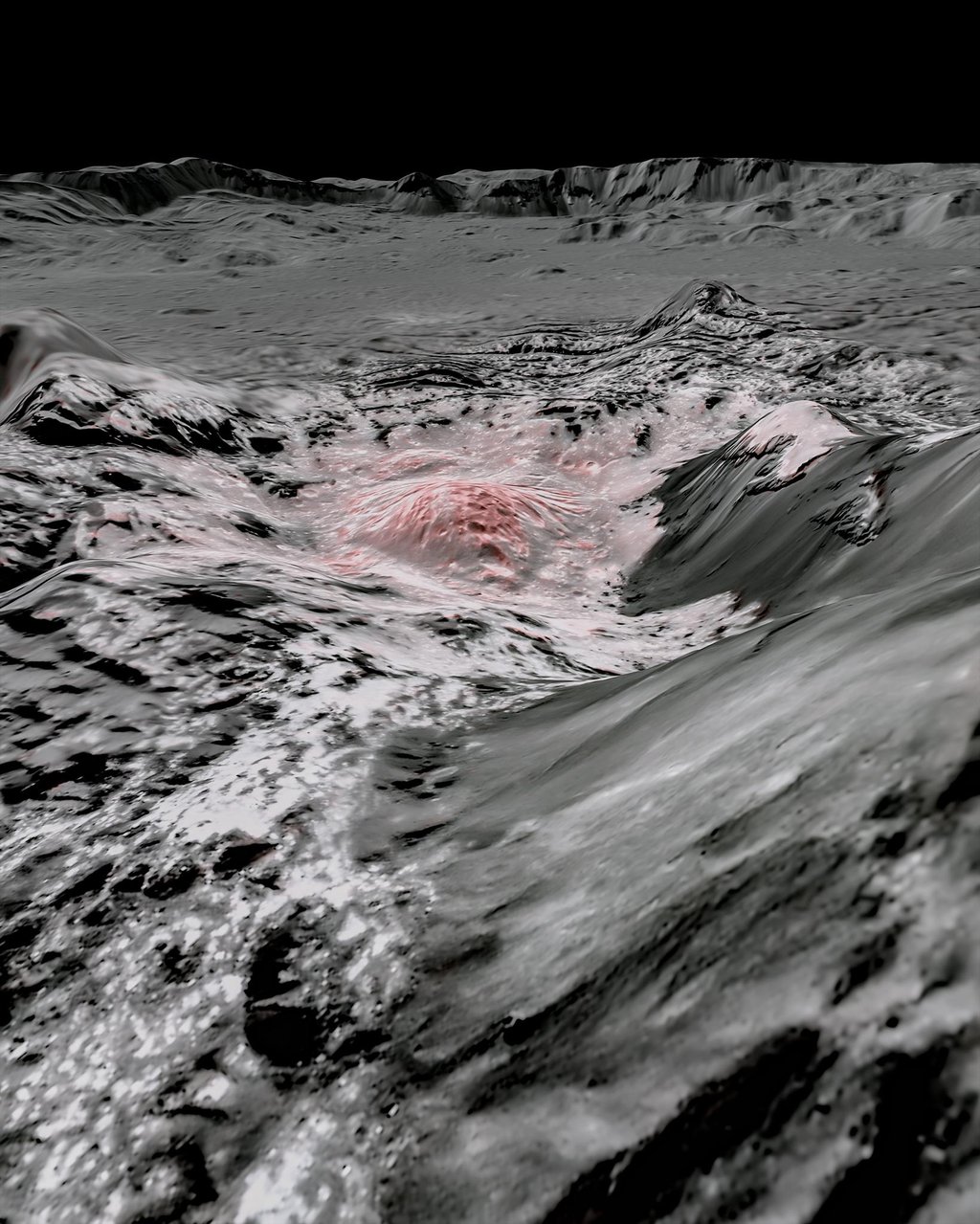 NASA's Dawn spacecraft captured pictures, which were combined to create this false-color view of a region in Occator Crater on the dwarf planet Ceres.
Credit: NASA/JPL-Caltech/UCLA/MPS/DLR/IDA
Full Image Details

The findings, which also reveal the extent of geologic activity in Occator Crater, appear in a special collection of papers published by Nature Astronomy, Nature Geoscience, and Nature Communications on Aug. 10.

"Dawn accomplished far more than we hoped when it embarked on its extraordinary extraterrestrial expedition," said Mission Director Marc Rayman of NASA's Jet Propulsion Laboratory in Southern California. "These exciting new discoveries from the end of its long and productive mission are a wonderful tribute to this remarkable interplanetary explorer." 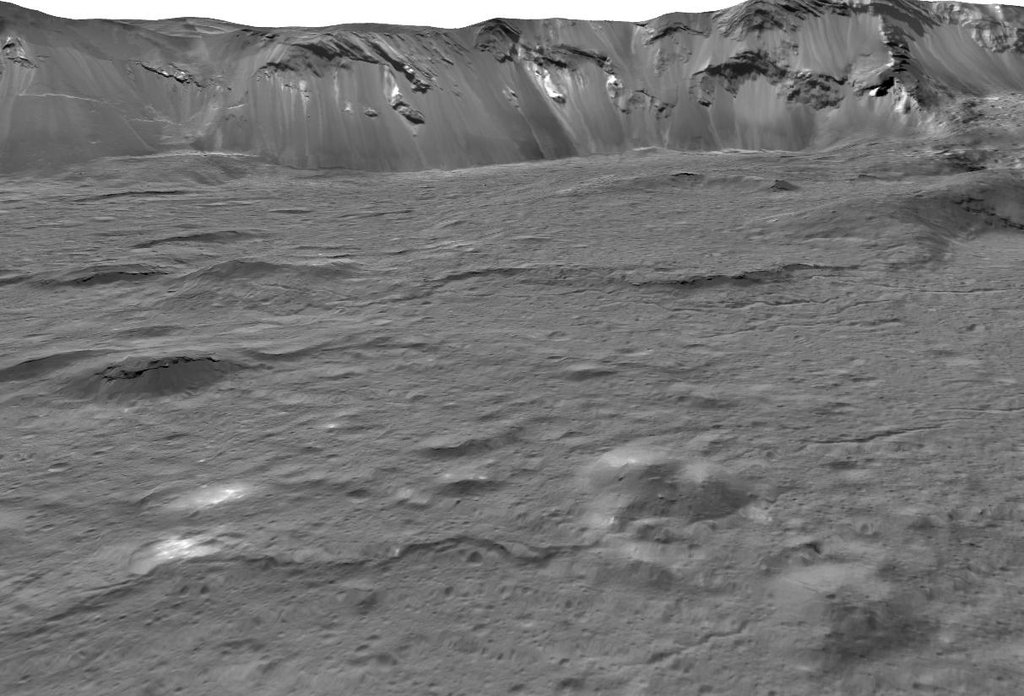 This view across the southeastern floor of the large Occator Crater on the dwarf planet Ceres is based on images obtained during NASA's Dawn spacecraft second extended mission in 2018.
Credit: NASA/JPL-Caltech/UCLA/MPS/DLR/IDA/USRA/LPI
Full Image Details

Long before Dawn arrived at Ceres in 2015, scientists had noticed diffuse bright regions with telescopes, but their nature was unknown. From its close orbit, Dawn captured images of two distinct, highly reflective areas within Occator Crater, which were subsequently named Cerealia Facula and Vinalia Faculae. ("Faculae" means bright areas.)

Scientists knew that micrometeorites frequently pelt the surface of Ceres, roughing it up and leaving debris. Over time, that sort of action should darken these bright areas. So their brightness indicates that they likely are young. Trying to understand the source of the areas, and how the material could be so new, was a main focus of Dawn's final extended mission, from 2017 to 2018.

The research not only confirmed that the bright regions are young - some less than 2 million years old; it also found that the geologic activity driving these deposits could be ongoing. This conclusion depended on scientists making a key discovery: salt compounds (sodium chloride chemically bound with water and ammonium chloride) concentrated in Cerealia Facula.

On Ceres' surface, salts bearing water quickly dehydrate, within hundreds of years. But Dawn's measurements show they still have water, so the fluids must have reached the surface very recently. This is evidence both for the presence of liquid below the region of Occator Crater and ongoing transfer of material from the deep interior to the surface.

The scientists found two main pathways that allow liquids to reach the surface. "For the large deposit at Cerealia Facula, the bulk of the salts were supplied from a slushy area just beneath the surface that was melted by the heat of the impact that formed the crater about 20 million years ago," said Dawn Principal Investigator Carol Raymond. "The impact heat subsided after a few million years; however, the impact also created large fractures that could reach the deep, long-lived reservoir, allowing brine to continue percolating to the surface."

To learn more about Ceres, zoom in and give the dwarf planet a spin. Use the search function at bottom to explore about just about anything else in our solar system. View the full interactive experience at Eyes on the Solar System. Credit: NASA/JPL-Caltech

In our solar system, icy geologic activity happens mainly on icy moons, where it is driven by their gravitational interactions with their planets. But that's not the case with the movement of brines to the surface of Ceres, suggesting that other large ice-rich bodies that are not moons could also be active.

Some evidence of recent liquids in Occator Crater comes from the bright deposits, but other clues come from an assortment of interesting conical hills reminiscent of Earth's pingos - small ice mountains in polar regions formed by frozen pressurized groundwater. Such features have been spotted on Mars, but the discovery of them on Ceres marks the first time they've been observed on a dwarf planet.

On a larger scale, scientists were able to map the density of Ceres' crust structure as a function of depth - a first for an ice-rich planetary body. Using gravity measurements, they found Ceres' crustal density increases significantly with depth, way beyond the simple effect of pressure. Researchers inferred that at the same time Ceres' reservoir is freezing, salt and mud are incorporating into the lower part of the crust.

Dawn is the only spacecraft ever to orbit two extraterrestrial destinations - Ceres and the giant asteroid Vesta - thanks to its efficient ion propulsion system. When Dawn used the last of a key fuel, hydrazine, for a system that controls its orientation, it was neither able to point to Earth for communications nor to point its solar arrays at the Sun to produce electrical power. Because Ceres was found to have organic materials on its surface and liquid below the surface, planetary protection rules required Dawn to be placed in a long-duration orbit that will prevent it from impacting the dwarf planet for decades.

How NASA's Dawn mission came to an end
What looks like Ceres on Earth?