My Favorite Martian Image: the Ridges of ‘South Séítah’ 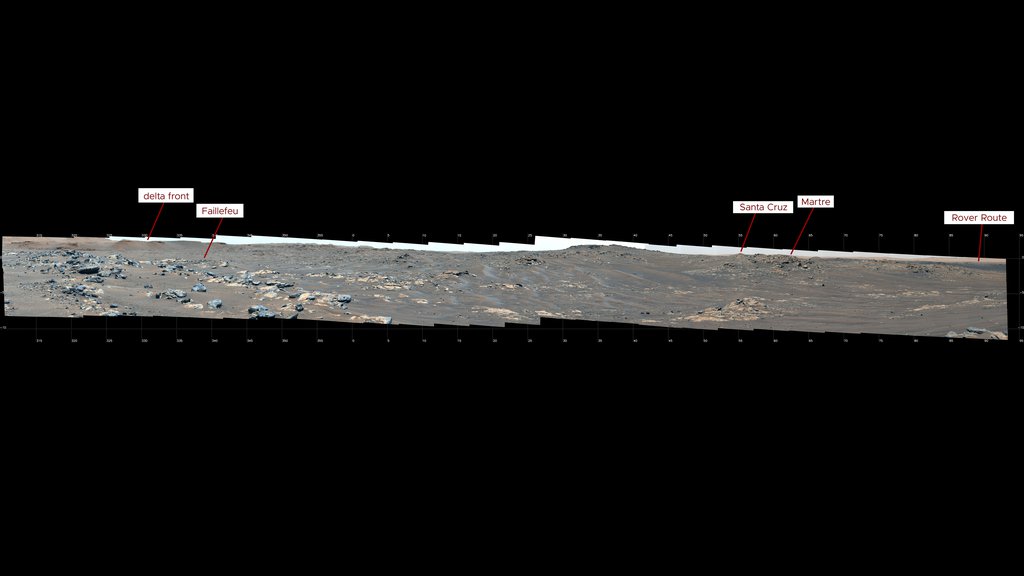 This annotated image indicates the location of several prominent geologic features visible in a mosaic composed of 84 pictures taken by the Mastcam-Z imager aboard Perseverance. Credit: NASA/JPL-Caltech/ASU/MSSS Full Image Details

NASA’s Perseverance rover captures a geologic feature with details that offer clues to the area’s mysterious past.

Ask any space explorer, and they’ll have a favorite photograph or two from their mission. For Jorge Núñez, an astrobiologist and planetary scientist working on the science team of NASA’s Perseverance rover, one of his current favorites is a rover’s-eye panorama of the “South Séítah” region of Mars’ Jezero Crater. Exploring the geologic unit was among the major objectives of the team’s first science campaign because it may contain some of the deepest, and potentially oldest, rocks in the giant crater.

“Just like any excited tourist approaching the end of a major road trip, we stopped at a lookout to get a first view of our destination,” said Núñez, who is based at Johns Hopkins University Applied Physics Laboratory in Laurel, Maryland. “This panorama is spectacular because you feel like you are there. It shows not only the incredible scale of the area, but also all the exploration possibilities South Séítah has to offer. With multiple intriguing rocky outcrops and ridgelines, each one is seemingly better than the last. If it’s not a field geologist’s dream, it’s pretty close.”

Composed of 84 individual enhanced-color images that were later stitched together, the mosaic was taken on Sept. 12 (the 201st Martian day, or sol, of the mission) by the Mastcam-Z camera system as the rover was parked on an elevated overlook just outside its entry point into South Séítah. Perseverance had just completed a record 190-yard (175-meter) drive the previous sol.

The mosaic was taken at the highest magnification and stretched to allow subtle color differences in the rocks and soil to be visible to the naked eye. Left of center and halfway up the image are the gray, darker gray, and Swiss-coffee-colored rocky outcrops of the ridge nicknamed “Faillefeu” (after a medieval abbey in the French Alps). The distinctly thin, at times tilted layering evident in several of Faillefeu’s rocks would have been high on the science team’s list of things to explore, because tilted layering suggests the possibility of tectonic activity. But similar features – along with other compelling geology – were visible on another ridgeline that the mission’s science team opted to explore instead.

The “Martre Ridge” (named after a commune in southeastern France) is like Faillefeu except three times as big. It contains not only low-lying flat rocks near the base of the ridge, but also rocky outcrops with thin layering at the base and massive caprocks near and at the ridge’s peak. The caprocks are usually made of harder, more resistant material than those stacked below them, suggesting potential differences in how the material was deposited.

“Another cool thing about this image is that one can also see in the background, on the right, the path Perseverance took as it made its way to South Séítah,” said Núñez. “And finally, there is the peak of ‘Santa Cruz’ far in the distance. We’re currently not planning on going there; it’s too far out of our way. But it is geologically interesting, reinforcing just how much great stuff the team gets to pick and choose from here at Jezero. It also looks cool.”