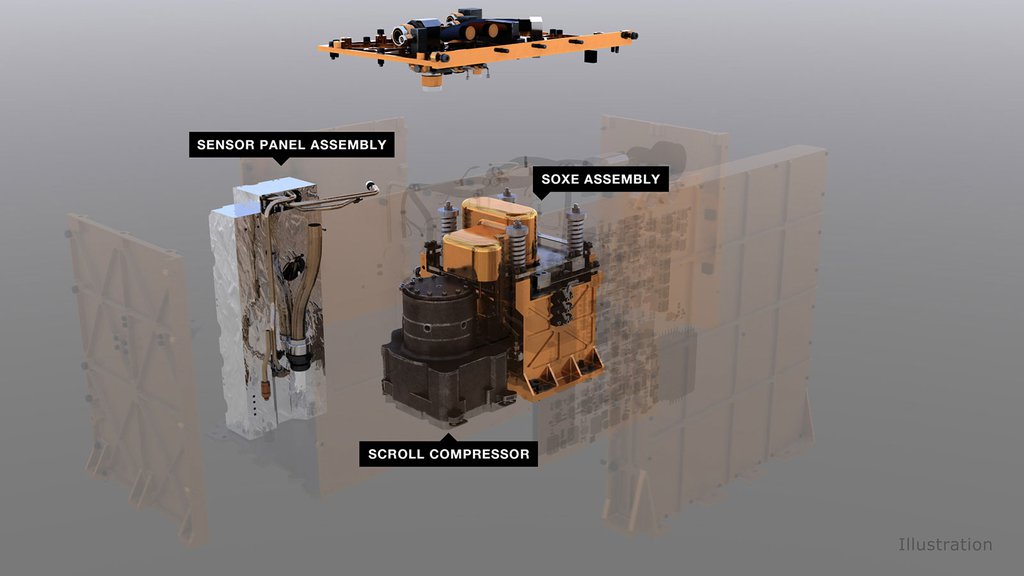 An illustration of MOXIE and its components. An air pump pulls in carbon dioxide gas from the Martian atmosphere, which is then regulated and fed to the Solid OXide Electrolyzer (SOXE), where it is electrochemically split to produce pure oxygen.
Credit: NASA/JPL-Caltech

NASA's Perseverance rover carries a device to convert Martian air into oxygen that, if produced on a larger scale, could be used not just for breathing, but also for fuel.

Editor's note: This story was updated on Dec. 15, 2020, to correct details about the oxygen-production process and rocket propellant requirements.

One of the hardest things about sending astronauts to Mars will be getting them home. Launching a rocket off the surface of the Red Planet will require industrial quantities of oxygen, which, along with rocket fuel, makes up the propellant: A crew of four would need about 55,000 pounds (25 metric tons) of it to produce thrust from 15,000 pounds (7 metric tons) of rocket fuel.

That's a lot of propellant. But instead of shipping all that oxygen, what if the crew could make it out of thin (Martian) air? A first-generation oxygen generator aboard NASA's Perseverance rover will test technology for doing exactly that.

The Mars Oxygen In-Situ Resource Utilization Experiment, or MOXIE, is an experimental instrument that stands apart from Perseverance's primary science. One of the rover's main purposes is capturing returnable rock samples that could carry signs of ancient microbial life. While Perseverance has a suite of instruments geared toward helping achieve that goal, MOXIE is focused solely on the engineering required for future human exploration efforts.

Since the dawn of the space age, researchers have talked about in-situ resource utilization, or ISRU. Think of it as living off the land and using what's available in the local environment. That includes things like finding water ice that could be melted for use or sheltering in caves, but also generating oxygen for rocket propellant and, of course, breathing.

Breathing is just a side benefit of MOXIE's true goal, said Michael Hecht of the Massachusetts Institute of Technology, the instrument's principal investigator. Rocket propellant is the heaviest consumable resource that astronauts will need, so being able to produce oxygen at their destination would make the first crewed trip to Mars easier, safer, and cheaper.

"What people typically ask me is whether MOXIE is being developed so astronauts have something to breathe," Hecht said. "But rockets breathe millions of times as much oxygen as people. Fortunately, the rocket has to breathe only for a few minutes during liftoff. But, even so, it needs about 25 tons of oxygen to do that, while the crew needs only about a ton for the entire mission."

Mars' atmosphere poses a major challenge for human life but is well suited for oxygen production. It's only 1% as thick as Earth's atmosphere, but it is 95% carbon dioxide, which contains oxygen.

MOXIE pulls in that air with a pump, then uses an electrochemical process to separate one oxygen atom from each molecule of carbon dioxide, or CO2, leaving carbon monoxide, or CO, as a byproduct. As the gases flow through the system, they are analyzed to check how much oxygen has been produced, how pure it is, and how efficiently the system is working. All the gases are vented back into the atmosphere after each experiment is run.

This electrochemical conversion requires high temperatures - about 1,470 degrees Fahrenheit (800 degrees Celsius) - in order to work. To manage those high temperatures, MOXIE, which is a little larger than a toaster, features a variety of heat-tolerant materials. Special 3D-printed nickel alloy parts heat and cool the gases flowing through instrument, while superlight insulation called aerogel holds in the heat to minimize the power needed to keep it at operating temperatures. The outside of MOXIE is coated in a thin layer of gold, which is an excellent reflector of infrared heat and keeps those blistering temperatures from radiating into other parts of Perseverance.

"MOXIE is designed to make about 6 to 10 grams of oxygen per hour - just about enough for a small dog to breathe," said Asad Aboobaker, a MOXIE systems engineer at NASA's Jet Propulsion Laboratory in Southern California. "A full-scale system geared to make (propellant for the flight home) would need to scale up oxygen production by about 200 times what MOXIE will create."

MOXIE engineer Asad Aboobaker of JPL explains how the instrument works in this video interview.

Hecht estimates that a full-scale MOXIE system on Mars might be a bit larger than a household stove and weigh around 2,200 pounds (1,000 kilograms) - almost as much as Perseverance itself. Work is ongoing to develop a prototype for one in the near future.

The team expects to run MOXIE about 10 times over the course of one Mars year (two Earth years), allowing them to watch how well it works in varying seasons. The results will inform the design of future oxygen generators.

"The commitment to developing MOXIE shows that NASA is serious about this," Hecht said. "MOXIE isn't the complete answer, but it's a critical piece of it. If successful, it will show that future astronauts can rely on this technology to help get them home safely from Mars."