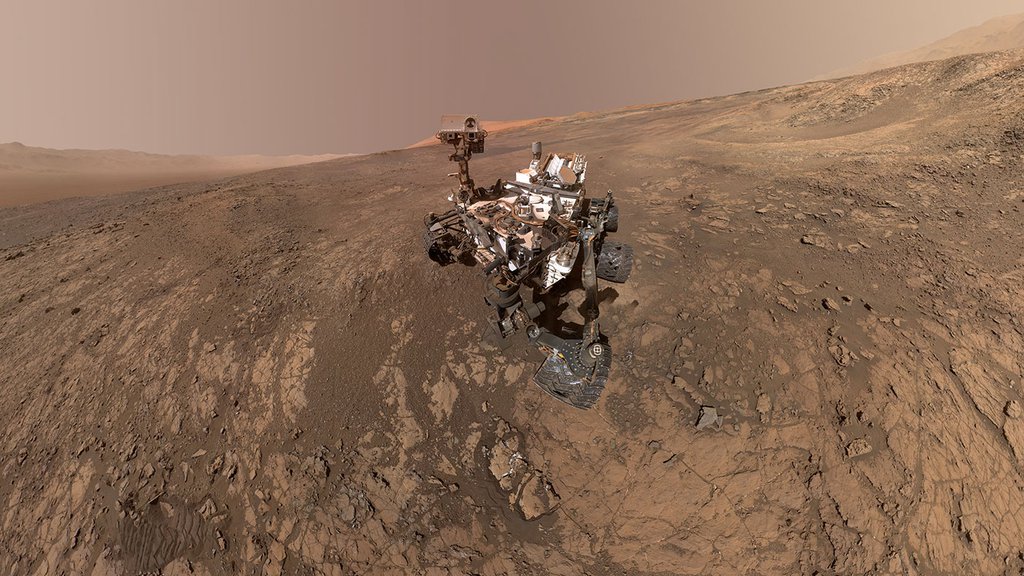 The rover took a recent selfie at its location on Vera Rubin Ridge.

A new self-portrait of NASA's Curiosity Mars rover shows the vehicle on Vera Rubin Ridge, which it has been investigating for the past several months. Directly behind the rover is the start of a clay-rich slope scientists are eager to begin exploring. In coming weeks, Curiosity will begin to climb this slope. In the image, north is on the left and west is on the right, with Gale Crater's rim on the horizon of both edges.

Poking up just behind Curiosity's mast is Mount Sharp, photobombing the robot's selfie. When Curiosity landed on Mars five years ago, the team's intention was to study lower Mount Sharp, where the rover will remain for all of its time on Mars. The mountain's base provides access to layers formed over millions of years. These layers formed in the presence of water -- likely due to a lake or lakes where sediments accumulated, which formed these layers inside Gale Crater.

The mosaic was assembled from dozens of images taken by Curiosity's Mars Hands Lens Imager (MAHLI). They were all taken on Jan. 23, 2018, during Sol 1943.

For news about other Mars missions this month, view the first episode of a new video series, "The Mars Report."

In this first episode of The Mars Report we celebrate the 14th anniversary of the Opportunity rover; show you a recent panoramic view from the Curiosity rover; and recap a "cool" discovery of ice deposits spotted by the Mars Reconnaissance Orbiter. Also, we look forward to the InSight lander, heading to the Red Planet in May 2018.

Additional information about NASA's exploration of Mars is at: