Most Luminous Galaxy Is Ripping Itself Apart 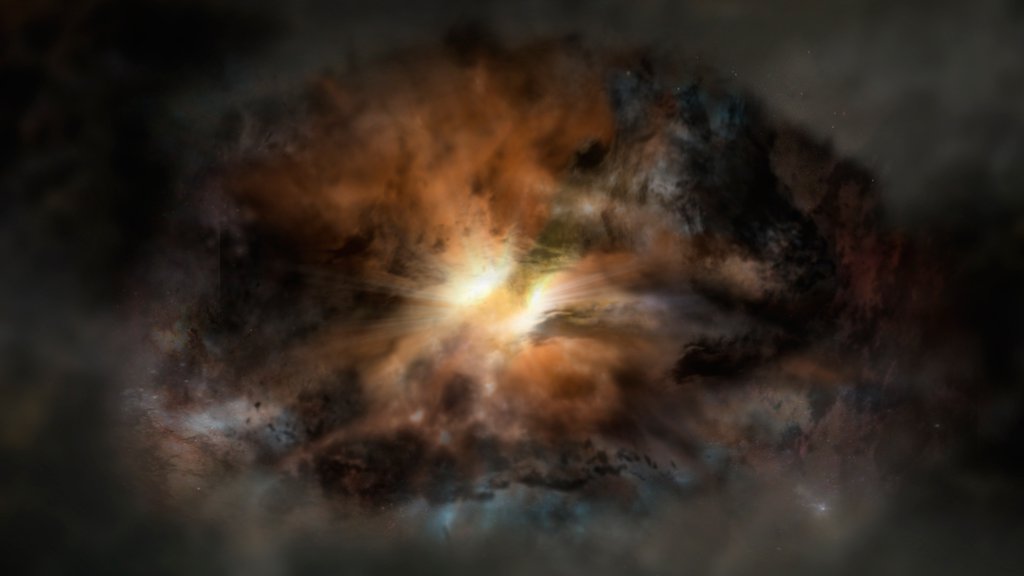 About 12.4 billion years ago, a supermassive black hole produced so much energy, it stirred up gas across its entire galaxy.

In a far-off galaxy, 12.4 billion light-years from Earth, a ravenous black hole is devouring galactic grub. Its feeding frenzy produces so much energy, it stirs up gas across its entire galaxy.

"It is like a pot of boiling water being heated up by a nuclear reactor in the center," said Tanio Diaz-Santos of the Universidad Diego Portales in Santiago, Chile, lead author of a new study about this galaxy.

This galaxy, called W2246-0526, is the most luminous galaxy known, according to research published in 2015, based on data from NASA's Wide-field Infrared Survey Explorer (WISE). That means that it has the highest power output of any galaxy in the universe, and would appear to shine the brightest if all galaxies were at the same distance from us.

The new study, published in The Astrophysical Journal Letters, reveals that this galaxy is also expelling tremendously turbulent gas -- a phenomenon never seen before in an object of this kind.

"This galaxy is tearing itself apart," said Roberto Assef, astronomer with the Universidad Diego Portales and leader of the observing team at the Atacama Large Millimeter/submillimeter Array (ALMA) in Chile. "The momentum and energy of the particles of light deposited in the gas are so great that they are pushing the gas out in all directions."

Using ALMA, astronomers found large amounts of ionized carbon in a very turbulent state throughout the entire galaxy. The galaxy formed a little over 1 billion years after the big bang.

The growing supermassive black hole at the center of the galaxy is the likely engine of the turbulence. As the gravitational pull of the black hole attracts surrounding gas and other matter, the material forms a structure around it called an accretion disk. The friction from this disk produces the intense brightness, making the galaxy shine like a combination of more than 300 trillion suns.

The black hole's event horizon is thought to be one million times smaller than the W2246-0526 galaxy, yet the energy emitted by the black hole's swallowing of material affects gas thousands of light-years away from it.

While turbulence has been detected in gas around supermassive black holes before - for example, around the centers of some nearby luminous galaxies that host active galactic nuclei - those winds are found to flow in specific directions. This is the first time that highly turbulent gas has been found across the entire galaxy.

"The 'boiling' gas is not in the accretion disk. The whole galaxy is being disturbed," said Peter Eisenhardt, project scientist for WISE, based at NASA's Jet Propulsion Laboratory, Pasadena, California.

Researchers are unsure whether the gas is being pushed out strongly enough to leave the galaxy entirely, or if it will eventually fall back.

"A likely finale would be that the galaxy will blow out all of the gas and dust that is surrounding it, and we would see the accretion disk without its dust cover -- what we call a quasar," Assef said.

This galaxy is an example of a rare class of objects called Hot, Dust-Obscured Galaxies or Hot DOGs, which are powerful galaxies with supermassive black holes in their centers. Only 1 out of every 3,000 galaxies that WISE has observed is in this category.

The WISE mission was essential to finding this galaxy because the galaxy is covered in dust, obscuring its light from visible-wavelength telescopes. The dust shifts the light from the galaxy into the infrared range, to which WISE is attuned.

JPL managed and operated WISE for NASA's Science Mission Directorate in Washington. The spacecraft was put into hibernation mode in 2011, after it scanned the entire sky twice, thereby completing its main objectives. In September 2013, WISE was reactivated, renamed NEOWISE and assigned a new mission to assist NASA's efforts to identify potentially hazardous near-Earth objects.