More Than 2.4 Million Names Are Going to Mars 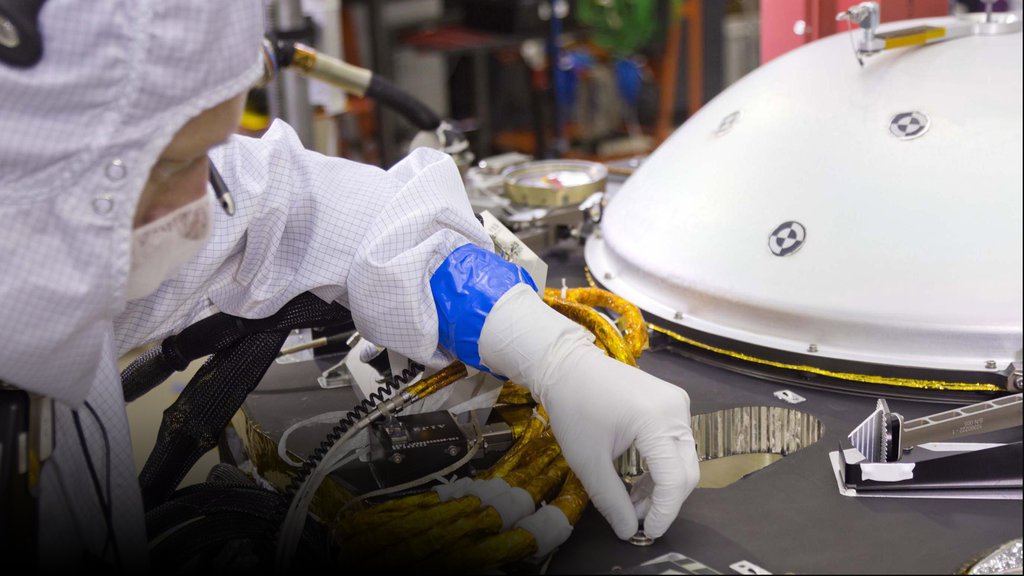 A spacecraft specialist in a clean room at Lockheed Martin Space Systems in Denver, where the InSight lander is being tested, affixes a dime-size chip onto the lander deck in November 2015. A second microchip will be added in 2018.› Larger view
Credit: NASA/JPL Caltech/Lockheed Martin 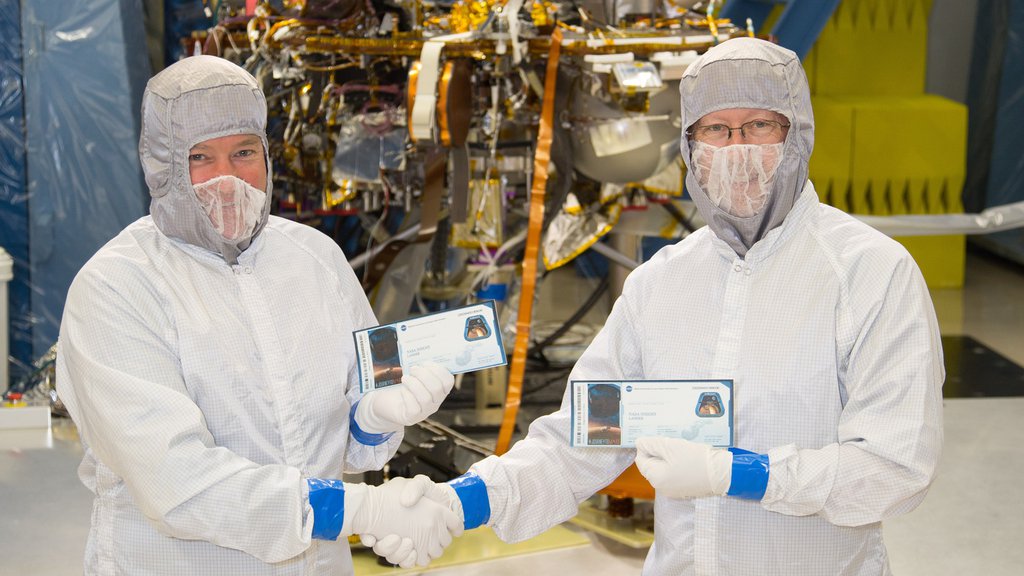 InSight project manager Tom Hoffman and principal investigator Bruce Banerdt pose with their "boarding passes" in 2015, showing that they're both sending their names to Mars.
Credit: Lockheed Martin 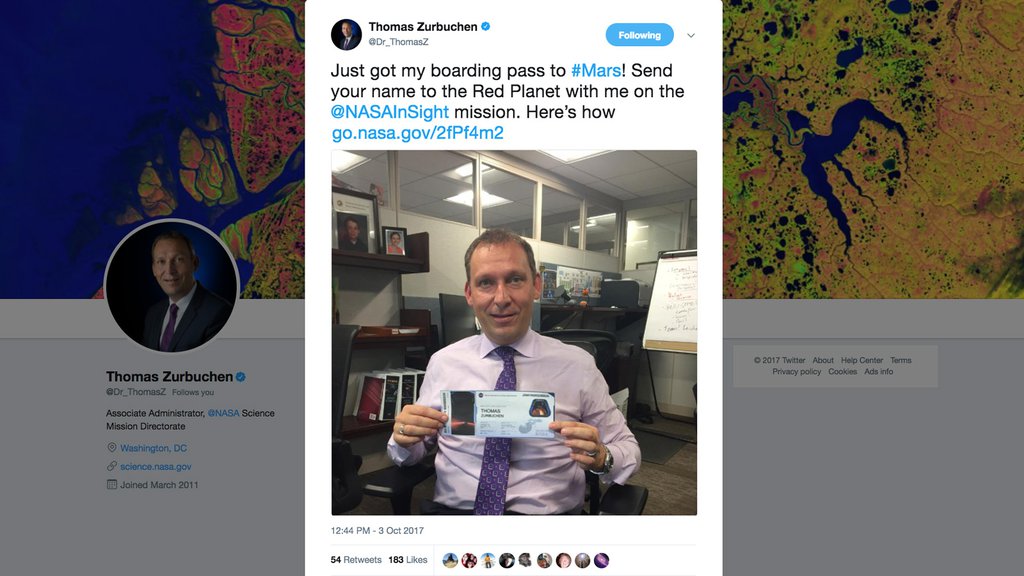 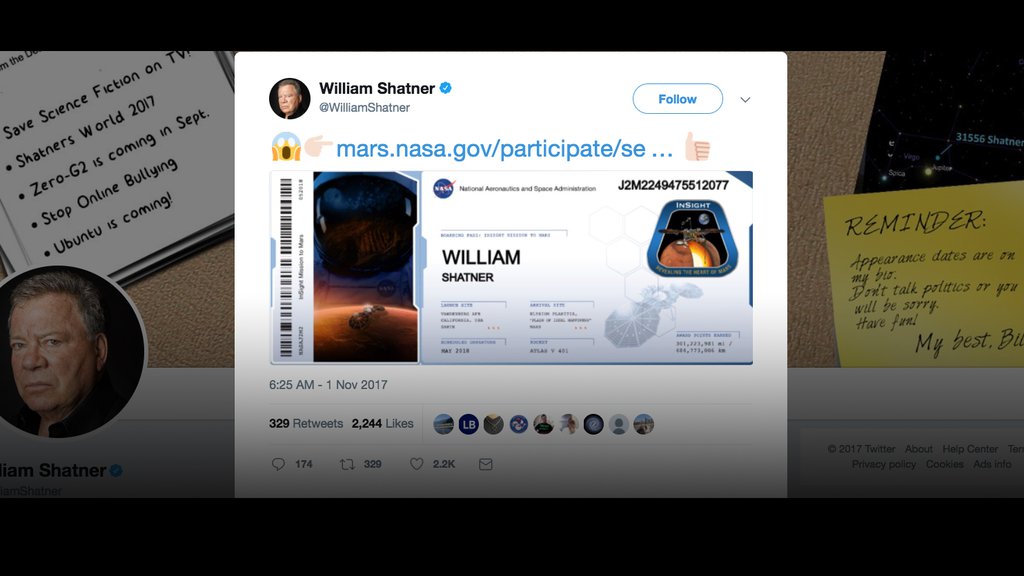 Actor William Shatner recently shared his "boarding pass" for the InSight mission. NASA closed a second opportunity for members of the public to include their names onboard the InSight robotic lander.
Credit: https://twitter.com/WilliamShatner 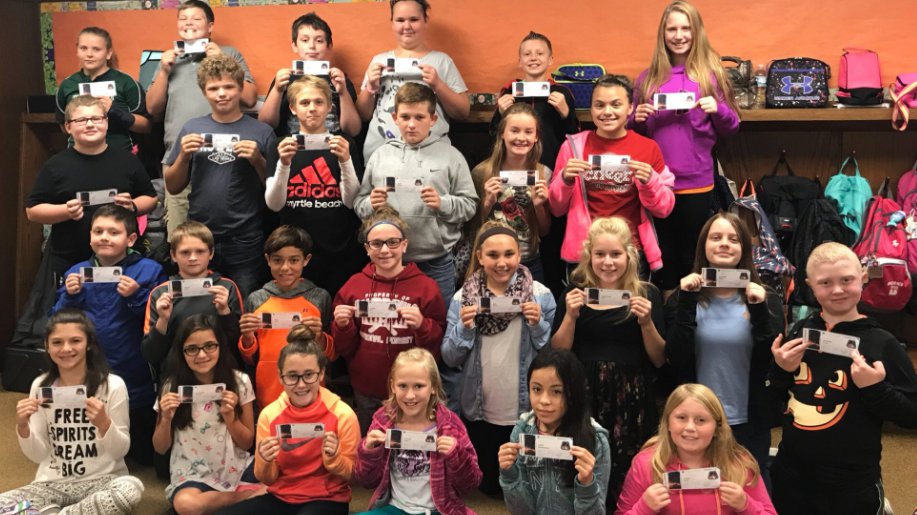 Students at Clinton Prairie Elementary School in Frankfort, Indiana, display their "boarding passes" for Mars. Their names are among the 2.4 million that will ride aboard NASA's InSight lander, bound for the Red Planet in 2018.
Credit: Kreg Stockberger

An open call generated overwhelming response from the public.

Last month, NASA invited members of the public to send their names to Mars. And the public responded loud and clear.

More than 1.6 million people signed up to have their names etched on a microchip that will be carried on NASA's upcoming InSight mission, which launches in May of 2018.

NASA's Jet Propulsion Laboratory in Pasadena, California, reopened the opportunity after it proved successful in 2015. During that open call, nearly 827,000 names were collected for a microchip that now sits on top of the robotic InSight lander.

The grand total once a second microchip is added in early 2018 will be 2,429,807 names. Space enthusiasts who signed up this last round shared their downloadable "boarding passes" on social media, complete with the total number of flight miles they've collected by participating in engagement initiatives for other Mars missions.

InSight will be the first mission to look deep beneath the Martian surface, studying the planet's interior by listening for marsquakes. These quakes travel through geologic material at different speeds and give scientists a glimpse of the composition and structure of the planet's inside. The insights into how Mars formed will help us better understand how other rocky planets are created.