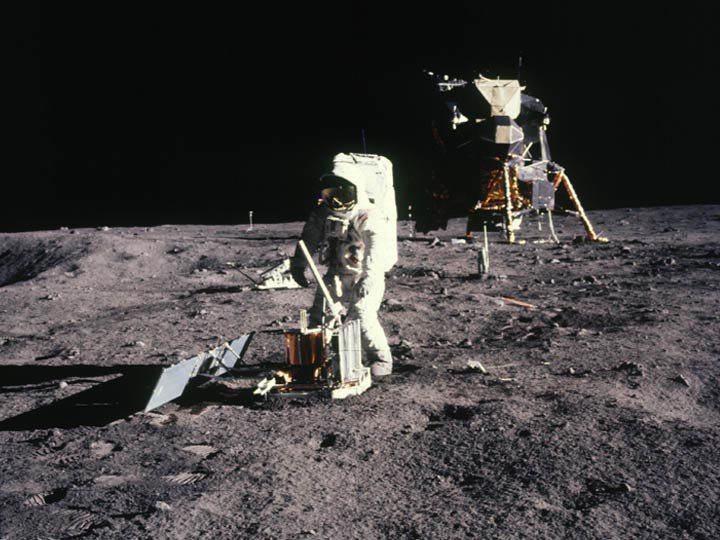 The lunar reflector is seen behind Apollo astronaut Buzz Aldrin.

Thirty-five years after Moon-walking astronauts placed special reflectors on the lunar surface, scientists have used these devices to test Albert Einstein's general theory of relativity to unprecedented accuracy. The findings, which also confirm theories from Galileo Galilei and Isaac Newton, may help to explain physical laws of the universe and benefit future space missions.

"Our research with the Lunar Laser Ranging experiment probes the equivalence principle, a foundation of Einstein's general theory of relativity, with extreme accuracy," said Dr. James Williams, a research scientist at NASA's Jet Propulsion Laboratory, Pasadena, Calif. Galileo established this principle in 1604 when he dropped objects of various weights and composition from Italy's Leaning Tower of Pisa. All the objects were affected equally by gravity, so they fell at the same rate.

Newton published a supporting explanation in 1687 in his Principia, and Einstein extended the principle nearly 100 years ago. Einstein's premise, called the strong equivalence principle, holds that all forms of matter accelerate at the same rate in response to gravity. This principle became a foundation of Einstein's general theory of relativity.

The Lunar Laser Ranging experiment confirms that the Moon and Earth "fall toward" the Sun at the same rate, even though Earth has a large iron core below its rocky mantle, while the Moon is mostly rocky with a much smaller core. The findings by Williams and Drs. Slava Turyshev and Dale Boggs, also of JPL, have been published in the Physical Review Letters.

"Lunar laser ranging can conduct very accurate tests of gravity and fundamental physics," said Williams, who pointed out that small variations in gravity are difficult to study because the force is weak, unless very large masses are used. The new results of this experiment provide a bonanza for modern physics.

"An important property of gravity is its universal effect on massive objects, despite their size and composition. This is why, as we understand more about gravity in the solar system, we learn a lot about gravitational and cosmological processes in the entire universe," said Turyshev.

"In addition to providing the most accurate test yet of the strong equivalence principle, our experiment also limits any possible changes in Newton's gravitational constant," said Turyshev. The gravitational constant deals with the attraction between objects in space, and some theories suggest that this attraction would change over time. If so, the general theory of relativity would need modification.

"This latest research shows no evidence of such a change. Both findings -- about the strong equivalence principle and the gravitational constant -- boost Einstein's theory," added Turyshev.

Great strides have been made over the past decade in refining the theories of Einstein, Galileo and Newton. The latest findings are twice as accurate as any previous results on the strong equivalence principle, and 10 times as accurate as anything previously published on the variation of Newton's gravitational constant

The JPL team tested the theories by beaming laser pulses to four Moon reflectors from McDonald Observatory in western Texas, and an observatory in southern France. The lunar reflectors bounced the laser beams straight back to Earth, where the roundtrip travel time was measured. Three of the reflectors were installed by the Apollo 11, 14 and 15 astronauts, and one built by France was carried on the unmanned Soviet Lunokhod 2 rover.

The current Moon reflectors require no power and still work perfectly after 35 years. As NASA pursues the vision of taking humans back to the Moon, and eventually to Mars and beyond, new, more precise laser ranging devices could be placed first on the Moon and then on Mars. To guide a spacecraft to a precise location on the Moon and to navigate trips on its surface, the Moon's orbit, rotation and orientation must be accurately known. Lunar laser ranging measurements are helping future human and robotic missions to the Moon.

More information about the research is available online at http://arxiv.org/abs/gr-qc/0411113 or http://funphysics.jpl.nasa.gov/physics/index.html.

The research was conducted under NASA's Astronomy and Physics Research and Analysis program, part of the agency's Science Mission Directorate, Washington, D.C. JPL, is a division of the California Institute of Technology, Pasadena.