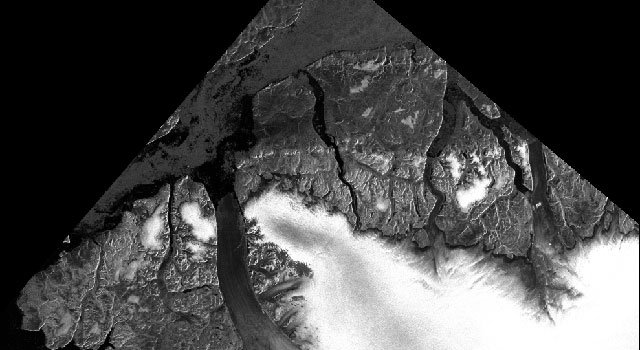 In 2007, the Arctic lost a massive amount of thick, multiyear sea ice, contributing to that year's record-low extent of Arctic sea ice.

PASADENA, Calif. - In 2007, the Arctic lost a massive amount of thick, multiyear sea ice, contributing to that year's record-low extent of Arctic sea ice. A new NASA-led study has found that the record loss that year was due in part to the absence of "ice arches," naturally-forming, curved ice structures that span the openings between two land points. These arches block sea ice from being pushed by winds or currents through narrow passages and out of the Arctic basin.

Beginning each fall, sea ice spreads across the surface of the Arctic Ocean until it becomes confined by surrounding continents. Only a few passages -- including the Fram Strait and Nares Strait -- allow sea ice to escape.

"There are a couple of ways to lose Arctic ice: when it flows out and when it melts," said lead study researcher Ron Kwok of NASA's Jet Propulsion Laboratory in Pasadena, Calif. "We are trying to quantify how much we're losing by outflow versus melt."

Kwok and colleagues found that ice arches were missing in 2007 from the Nares Strait, a relatively narrow 30- to 40-kilometer-wide (19- to 25-mile-wide) passage west of Greenland. Without the arches, ice exited freely from the Arctic. The Fram Strait, east of Greenland, is about 400 kilometers (249 miles) wide and is the passage through which most sea ice usually exits the Arctic.

Despite Nares' narrow width, the team reports that in 2007, ice loss through Nares equaled more than 10 percent of the amount emptied on average each year through the wider Fram Strait.

"Until recently, we didn't think the small straits were important for ice loss," Kwok said. The findings were published this month in Geophysical Research Letters.

"One of our most important goals is developing predictive models of Arctic sea ice cover," said Tom Wagner, cryosphere program manager at NASA Headquarters in Washington. "Such models are important not only to understanding changes in the Arctic, but also changes in global and North American climate. Figuring out how ice is lost through the Fram and Nares straits is critical to developing those models."

To find out more about the ice motion in Nares Strait, the scientists examined a 13-year record of high-resolution radar images from the Canadian RADARSAT and European Envisat satellites. They found that 2007 was a unique year – the only one on record when arches failed to form, allowing ice to flow unobstructed through winter and spring.

The arches usually form at southern and northern points within Nares Strait when big blocks of sea ice try to flow through the strait's restricted confines, become stuck and are compressed by other ice. This grinds the flow of sea ice to a halt.

"We don't completely understand the conditions conducive to the formation of these arches," Kwok said. "We do know that they are temperature-dependent because they only form in winter. So there's concern that if climate warms, the arches could stop forming."

To quantify the impact of ice arches on Arctic Ocean ice cover, the team tracked ice motion evident in the 13-year span of satellite radar images. They calculated the area of ice passing through an imaginary line, or "gate," at the entrance to Nares Strait. Then they incorporated ice thickness data from NASA's ICESat to estimate the volume lost through Nares.

They found that in 2007, Nares Strait drained the Arctic Ocean of 88,060 square kilometers (34,000 square miles) of sea ice, or a volume of 60 cubic miles. The amount was more than twice the average amount lost through Nares each year between 1997 and 2009.

The ice lost through Nares Strait was some of the thickest and oldest in the Arctic Ocean.

"If indeed these arches are less likely to form in the future, we have to account for the annual ice loss through this narrow passage. Potentially, this could lead to an even more rapid decline in the summer ice extent of the Arctic Ocean," Kwok said.