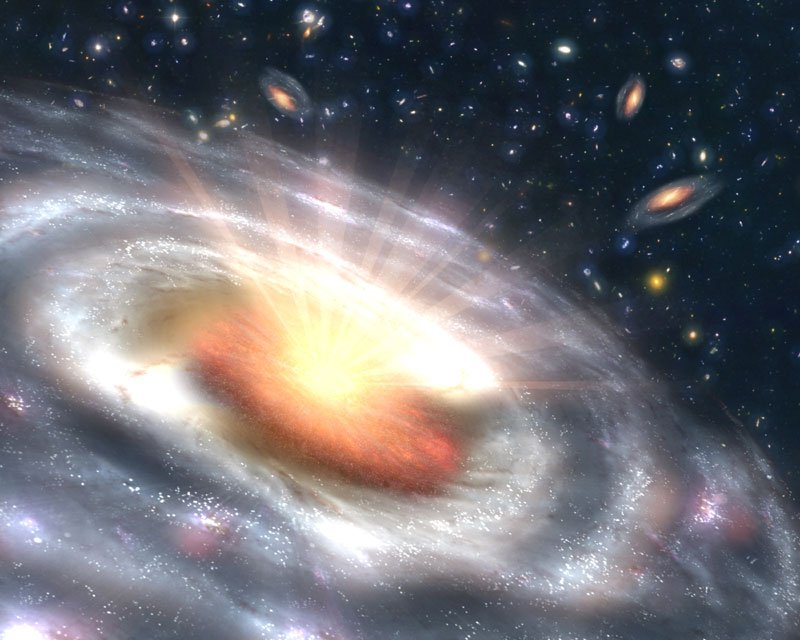 A growing black hole, called a quasar, can be seen at the center of a faraway galaxy in this artist's concept.+ Full image and caption
Credit: NASA/JPL-Caltech 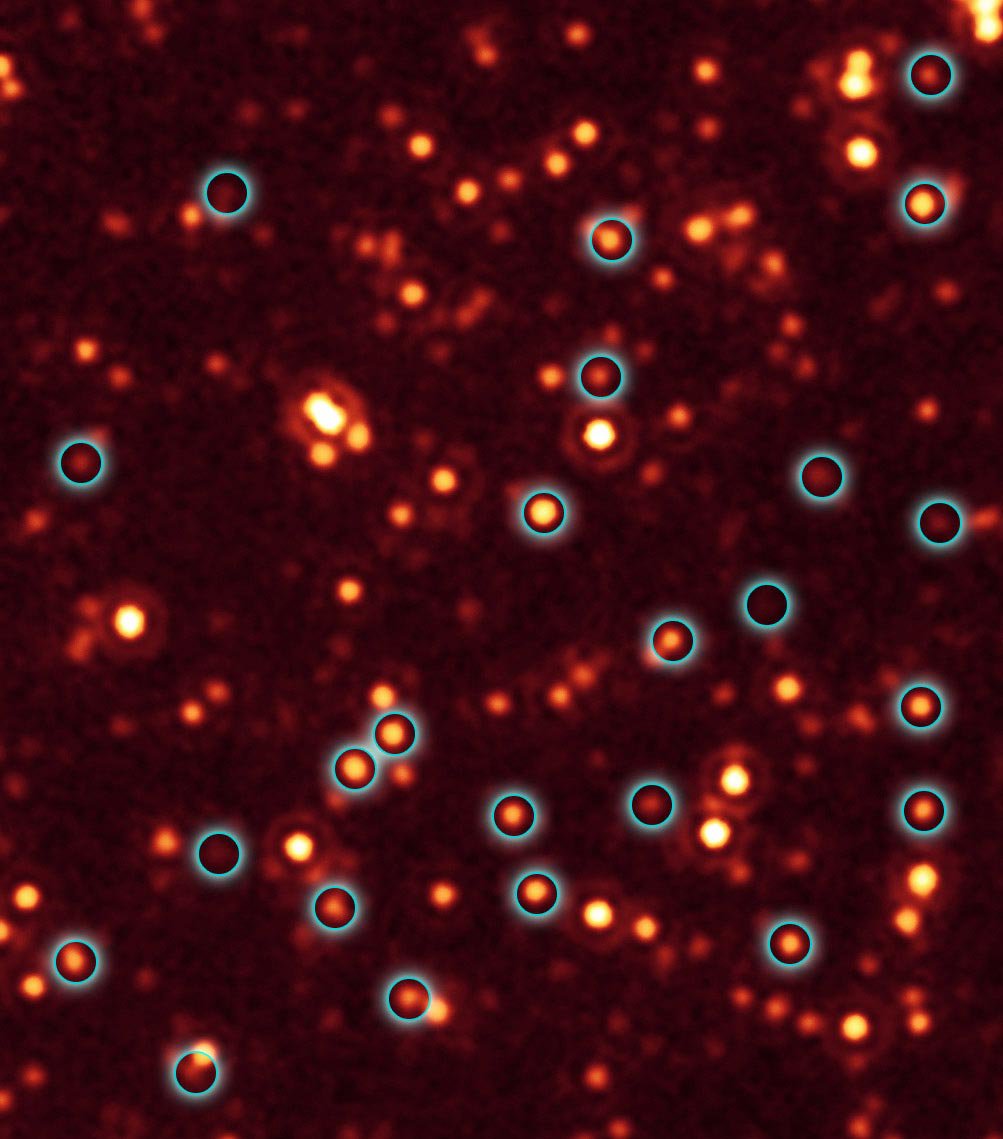 This image, taken with Spitzer's infrared vision, shows a fraction of the black holes, which are located deep in the bellies of distant, massive galaxies (circled in blue). + Full image and caption

Astronomers have unmasked hundreds of black holes hiding deep inside dusty galaxies billions of light-years away.

The massive, growing black holes, discovered by NASA's Spitzer and Chandra space telescopes, represent a large fraction of a long-sought missing population. Their discovery implies there were hundreds of millions of additional black holes growing in our young universe, more than doubling the total amount known at that distance.

"Active, supermassive black holes were everywhere in the early universe," said Mark Dickinson of the National Optical Astronomy Observatory in Tucson, Ariz. "We had seen the tip of the iceberg before in our search for these objects. Now, we can see the iceberg itself." Dickinson is a co-author of two new papers appearing in the Nov. 10 issue of the Astrophysical Journal. Emanuele Daddi of the Commissariat a l'Energie Atomique in France led the research.

The findings are also the first direct evidence that most, if not all, massive galaxies in the distant universe spent their youths building monstrous black holes at their cores.

For decades, a large population of active black holes has been considered missing. These highly energetic structures belong to a class of black holes called quasars. A quasar consists of a doughnut-shaped cloud of gas and dust that surrounds and feeds a budding supermassive black hole. As the gas and dust are devoured by the black hole, they heat up and shoot out X-rays. Those X-rays can be detected as a general glow in space, but often the quasars themselves can't be seen directly because dust and gas blocks them from our view.

"We knew from other studies from about 30 years ago that there must be more quasars in the universe, but we didn't know where to find them until now," said Daddi.

Daddi and his team initially set out to study 1,000 dusty, massive galaxies that are busy making stars and were thought to lack quasars. The galaxies are about the same mass as our own spiral Milky Way galaxy, but irregular in shape. At 9 to 11 billion light-years away, they existed at a time when the universe was in its adolescence, between 2.5 and 4.5 billion years old.

When the astronomers peered more closely at the galaxies with Spitzer's infrared eyes, they noticed that about 200 of the galaxies gave off an unusual amount of infrared light. X-ray data from Chandra, and a technique called "stacking," revealed the galaxies were, in fact, hiding plump quasars inside. The scientists now think that the quasars heat the dust in their surrounding doughnut clouds, releasing the excess infrared light.

"We found most of the population of hidden quasars in the early universe," said Daddi. Previously, only the rarest and most energetic of these hidden black holes had been seen at this early epoch.

The newfound quasars are helping answer fundamental questions about how massive galaxies evolve. For instance, astronomers have learned that most massive galaxies steadily build up their stars and black holes simultaneously until they get too big and their black holes suppress star formation.

The observations also suggest that collisions between galaxies might not play as large a role in galaxy evolution as previously believed. "Theorists thought that mergers between galaxies were required to initiate this quasar activity, but we now see that quasars can be active in unharassed galaxies," said co-author David Alexander of Durham University, United Kingdom.

"It's as if we were blindfolded studying the elephant before, and we weren't sure what kind of animal we had," added co-author David Elbaz of the Commissariat a l'Energie Atomique. "Now, we can see the elephant for the first time."

The new observations were made as part of the Great Observatories Origins Deep Survey, the most sensitive survey to date of the distant universe at multiple wavelengths.

Consistent results were recently obtained by Fabrizio Fiore of the Osservatorio Astronomico di Roma, Italy, and his team. Their results will appear in the Jan. 1, 2008, issue of Astrophysical Journal.

The National Optical Astronomy Observatory is operated by the Association of Universities for Research in Astronomy under a cooperative agreement with the National Science Foundation.