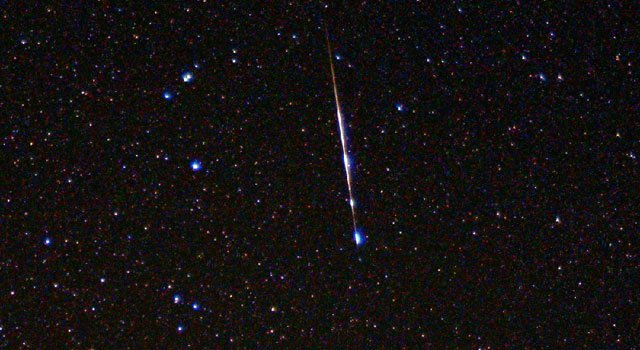 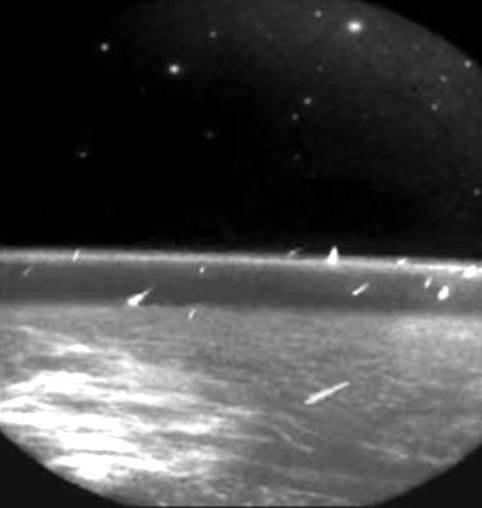 The Ballistic Missile Defense Organization's Midcourse Space Experiment satellite imaged this peak of the 1997 Leonid Meteor Shower from above 29 meteors over a 48 minute period entering the Earth's atmosphere.
Credit: BMDO/APL

Meteor showers – one of the many benefits to living on a planet with an atmosphere.

You know them as "shooting stars," or meteors. Space scientists know them as the fiery end of tiny visitors from space. Those momentary streaks of light across the night sky are nothing more than small to almost-microscopic pieces of space debris whose trip through the void has ended in a kamikaze run into Earth's atmosphere. Of course, with 100 tons of space rock and rubble bombarding the planet each and every day, you'd think you could stick your head out the window any night of the week and easily catch a glimpse of a space rock's final moments.

"It doesn't really work that way," said Don Yeomans, manager of NASA's Near-Earth Object Program Office at NASA's Jet Propulsion Laboratory in Pasadena, Calif. "Sure, there are a lot of space rocks entering our atmosphere each day, but take into account that only half of the world is in darkness at any one time and two-thirds of that is over water where almost nobody lives. Then, factor in that the weather and city-lighting conditions where most people live are less than conducive for meteor viewing, and few people are even looking up at the appropriate moment. When you put it all together, it's almost notable that anybody notices these meteors at all."

Which begs the question -- if spotting shooting stars is so tough, what is a person with both good visual acuity and a passion for celestial light displays to do?

"Meteor showers are definitely the way to go," said Yeomans. "We know pretty much when they are going to occur and where to look in the night sky." (For a guide and viewing tips click on 2010 Major Meteor Showers)

"The comet trails that result in meteor showers can be from comet flybys that occurred hundreds of years ago," said Yeomans. "Remarkably, we can pin down the cosmic perpetrators. For example, we know from the similarity of their orbits that the Geminid showers that occur each December result from the debris of a dead comet called 3200 Phaethon. "

Along with the source of the Geminids, astronomers know that comet C/1861 G1 Thatcher supplied the particles for April's Lyrids; famous comet Halley is responsible for both May's Eta Aquarids and October's Orionids; 55P/Tempel-Tuttle funded November's Leonids; and 109P/Swift-Tuttle is the origin of the most celebrated shower of them all – August's Perseids.

By now, you may have noticed that the names of all the showers listed are associated with that of a constellation. Meteor shower particles travel through space at the same relative velocity and in parallel paths. When they are sucked in by Earth's gravity and light up in our atmosphere, a viewer on the ground would note they appear to radiate from a single point in the sky. A shower's name is usually associated with the nearest constellation in the sky to that single point at the time of shower maximum.

"Usually, the first couple of nights of a meteor shower have light activity," said Yeomans. "Then, the number of meteors can increase dramatically as Earth approaches the densest portion of the stream. After peaking for anywhere from a few hours to a few nights, it decreases back down to a level where you couldn't distinguish it from a normal night's meteor activity.

"The end of the line for a particle from space can be a great opportunity for scientists to study the nature of comets," said Yeomans. "But it is more than that. It is a great reminder that what we live on is essentially a big spacecraft traveling through the solar system and interacting with many of its parts. And as free entertainment, you can't beat it."