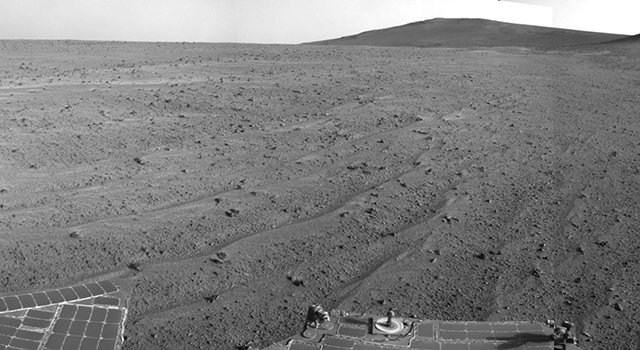 The resets, including a dozen this month, interfere with the rover's planned science activities, even though recovery from each incident is completed within a day or two.

Flash memory retains data even when power is off. It is the type used for storing photos and songs on smart phones or digital cameras, among many other uses. Individual cells within a flash memory sector can wear out from repeated use. Reformatting clears the memory while identifying bad cells and flagging them to be avoided.

"Worn-out cells in the flash memory are the leading suspect in causing these resets," said John Callas of NASA's Jet Propulsion Laboratory, Pasadena, California, project manager for NASA's Mars Exploration Rover Project. "The flash reformatting is a low-risk process, as critical sequences and flight software are stored elsewhere in other non-volatile memory on the rover."

The project landed twin rovers Spirit and Opportunity on Mars in early 2004 to begin missions planned to last only three months. Spirit worked for six years, and Opportunity is still active. Findings about ancient wet environments on Mars have come from both rovers.

The project reformatted the flash memory on Spirit five years ago to stop a series of amnesia events Spirit had been experiencing. The reformatting planned for early next month will be the first for Opportunity. Even after the rover has been active for more than a decade and is currently about 125 million miles (about 200 million kilometers) from JPL, the rover team can still perform this type of upkeep.

Preparations include downloading to Earth all useful data remaining in the flash memory and switching the rover to an operating mode that does not use flash memory. Also, the team is restructuring the rover's communication sessions to use a slower data rate, which may add resilience in case of a reset during these preparations.

The Mars Exploration Rover Project is one element of NASA's ongoing and future Mars missions preparing for a human mission to the planet in the 2030s. JPL, a division of the California Institute of Technology, manages the project for NASA's Science Mission Directorate in Washington.