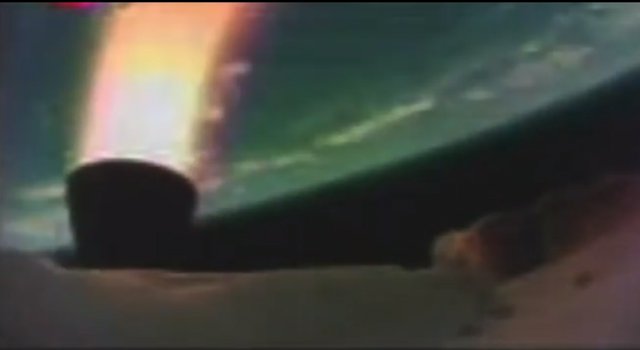 A screen shot shows the LDSD test vehicle after it dropped from the balloon that lifted it to high altitudes and fired its rocket. The picture was taken by a low-resolution camera onboard the vehicle. Earth is the blue-green orb in the background.
Credit: NASA/JPL-Caltech

Initial indications are that the vehicle successfully flew its flight test profile as planned, and deployed the two landing technologies. The first is a doughnut-shaped tube called the Supersonic Inflatable Aerodynamic Decelerator (SIAD), with early indications that it deployed as expected. The second is an enormous parachute (the Supersonic Disk Sail Parachute). Imagery downlinked in real-time from the test vehicle indicates that the parachute did not deploy as expected.

The upper layers of Earth's stratosphere are the most similar environment available to match the properties of the thin atmosphere of Mars. The LDSD mission developed this test method to ensure the best prospects for effective testing of the new and improved technologies.

There will be a teleconference for news media tomorrow, June 29, at 7 a.m. HST (10 a.m. PDT/1 pm. EDT). Journalists can participate in the briefing via teleconference by calling 800-369-6087 (International: 1-773-756-0843), with the call leader being Dave Steitz, and the call passcode "LDSD." Journalists will be required to give their name and affiliation to join the moderated call. Information on how to access a follow-along page with visuals used during the telecon will be available online 15 minutes prior to the initiation of the telecon at the LDSD website:

Media and the public may listen online at: