'Marsquakes' Could Shake Up Planetary Science 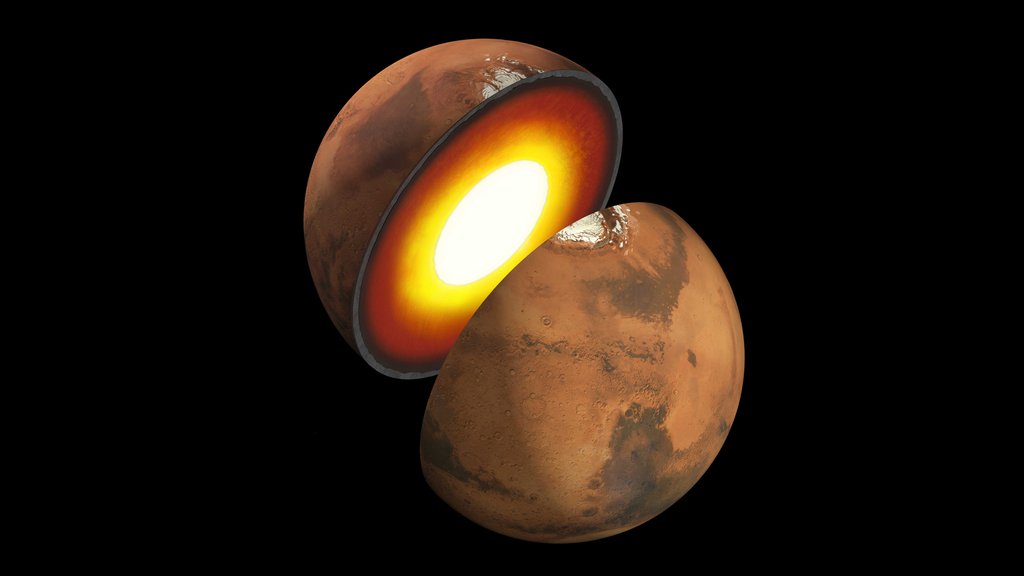 Artist's rendition showing the inner structure of Mars. The topmost layer is known as the crust, underneath it is the mantle, which rests on an inner core.› Full image and caption
Credit: NASA/JPL-Caltech

InSight, the next mission to the Red Planet, will use seismology to see into the depths of Mars.

Starting next year, scientists will get their first look deep below the surface of Mars.

That's when NASA will send the first robotic lander dedicated to exploring the planet's subsurface. InSight, which stands for Interior Exploration using Seismic Investigations, will study marsquakes to learn about the Martian crust, mantle and core.

Are there earthquakes on Mars? Or rather, "marsquakes?" And what could they teach us about the Red Planet? Find out more in this 60-second video and by visiting mars.nasa.gov/insight .

Doing so could help answer a big question: how are planets born?

Seismology, the study of quakes, has already revealed some of the answers here on Earth, said Bruce Banerdt, Insight's principal investigator at NASA's Jet Propulsion Laboratory, Pasadena, California. But Earth has been churning its geologic record for billions of years, hiding its most ancient history. Mars, at half the size of Earth, churns far less: it's a fossil planet, preserving the history of its early birth.

"During formation, this ball of featureless rock metamorphosed into a diverse and fascinating planet, almost like caterpillar to a butterfly," Banerdt said. "We want to use seismology to learn why Mars formed the way it did, and how planets take shape in general."

When rocks crack or shift, they give off seismic waves that bounce throughout a planet. These waves, better known as quakes, travel at different speeds depending on the geologic material they travel through.

Seismometers, like InSight's SEIS instrument, measure the size, frequency and speed of these quakes, offering scientists a snapshot of the material they pass through.

"A seismometer is like a camera that takes an image of a planet's interior," Banerdt said. "It's a bit like taking a CT scan of a planet."

Mars' geologic record includes lighter rocks and minerals -- which rose from the planet's interior to form the Martian crust -- and heavier rocks and minerals that sank to form the Martian mantle and core. By learning about the layering of these materials, scientists can explain why some rocky planets turn into an "Earth" rather than a "Mars" or "Venus" -- a factor that is essential to understanding where life can appear in the universe.

Each time a quake happens on Mars, it will give InSight a "snapshot" of the planet's interior. The InSight team estimates the spacecraft will see between a couple dozen to several hundred quakes over the course of the mission. Small meteorites, which pass through the thin Martian atmosphere on a regular basis, will also serve as seismic "snapshots."

"It will be a fuzzy picture at first, but the more quakes we see, the sharper it will get," Banerdt said.

One challenge will be getting a complete look at Mars using only one location. Most seismology on Earth takes measurements from multiple stations. InSight will have the planet's only seismometer, requiring scientists to parse the data in creative ways.

"We have to get clever," Banerdt said. "We can measure how various waves from the same quake bounce off things and hit the station at different times."

InSight won't be the first NASA mission to do seismology.

The Apollo missions included four seismometers for the Moon. Astronauts exploded mortar rounds to create vibrations, offering a peek about 328 feet (100 meters) under the surface. They crashed the upper stages of rockets into the Moon, producing waves that enabled them to probe its crust. They also detected thousands of genuine moonquakes and meteorite impacts.

The Viking landers attempted to conduct seismology on Mars in the late 1970s. But those seismometers were located on top of the landers, which swayed in the wind on legs equipped with shock absorbers.

"It was a handicapped experiment," Banerdt said. "I joke that we didn't do seismology on Mars -- we did it three feet above Mars."

InSight will measure more than seismology. The Doppler shift from a radio signal on the lander can reveal whether the planet's core is still molten; a self-burrowing probe is designed to measure heat from the interior. Wind, pressure and temperature sensors will allow scientists to subtract vibrational "noise" caused by weather. Combining all this data will give us the most complete picture of Mars yet.

For more information about InSight: