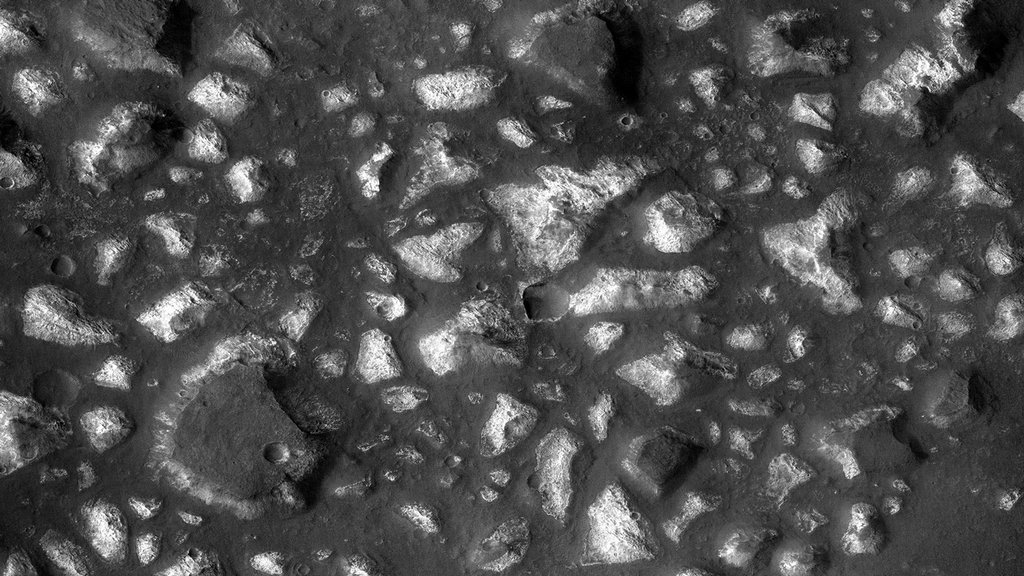 This view of a portion of the Eridania region of Mars shows blocks of deep-basin deposits that have been surrounded and partially buried by younger volcanic deposits.› Full image and caption
Credit: NASA/JPL-Caltech/MSSS 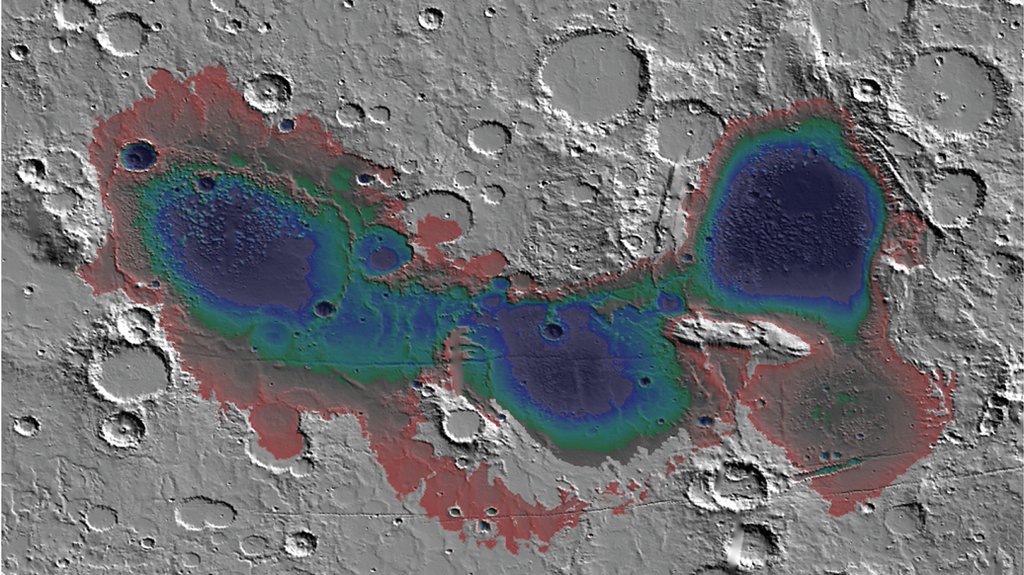 The Eridania basin of southern Mars is believed to have held a sea about 3.7 billion years ago, with seafloor deposits likely resulting from underwater hydrothermal activity.› Full image and caption
Credit: NASA 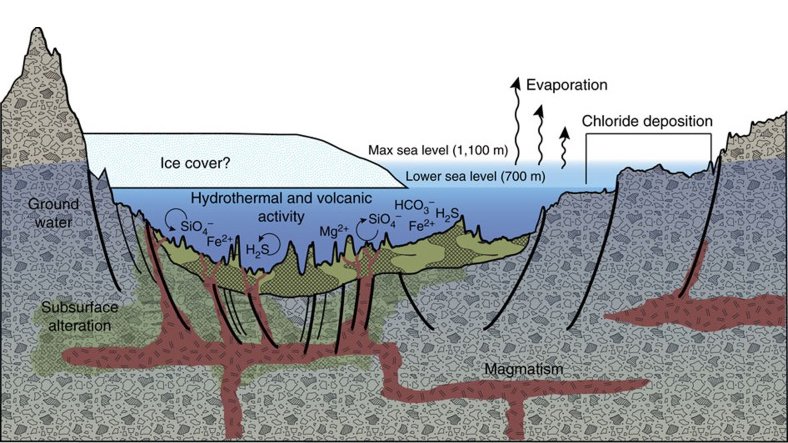 This diagram illustrates an interpretation for the origin of some deposits in the Eridania basin of southern Mars as resulting from seafloor hydrothermal activity more than 3 billion years ago.› Full image and caption
Credit: NASA

› A long-gone sea on southern Mars once held nearly 10 times as much water as all of North America's Great Lakes combined, a recent report estimates.

› The report adds an important type of wet ancient Martian environment to the diversity indicated by previous findings of evidence for rivers, lakes, deltas, seas, groundwater and hot springs.

A recent international report examines observations by NASA's Mars Reconnaissance Orbiter (MRO) of massive deposits in a basin on southern Mars. The authors interpret the data as evidence that these deposits were formed by heated water from a volcanically active part of the planet's crust entering the bottom of a large sea long ago.

"Even if we never find evidence that there's been life on Mars, this site can tell us about the type of environment where life may have begun on Earth," said Paul Niles of NASA's Johnson Space Center, Houston. "Volcanic activity combined with standing water provided conditions that were likely similar to conditions that existed on Earth at about the same time -- when early life was evolving here."

Mars today has neither standing water nor volcanic activity. Researchers estimate an age of about 3.7 billion years for the Martian deposits attributed to seafloor hydrothermal activity. Undersea hydrothermal conditions on Earth at about that same time are a strong candidate for where and when life on Earth began. Earth still has such conditions, where many forms of life thrive on chemical energy extracted from rocks, without sunlight. But due to Earth's active crust, our planet holds little direct geological evidence preserved from the time when life began. The possibility of undersea hydrothermal activity inside icy moons such as Europa at Jupiter and Enceladus at Saturn feeds interest in them as destinations in the quest to find extraterrestrial life.

Observations by MRO's Compact Reconnaissance Spectrometer for Mars (CRISM) provided the data for identifying minerals in massive deposits within Mars' Eridania basin, which lies in a region with some of the Red Planet's most ancient exposed crust.

The researchers estimate the ancient Eridania sea held about 50,000 cubic miles (210,000 cubic kilometers) of water. That is as much as all other lakes and seas on ancient Mars combined and about nine times more than the combined volume of all of North America's Great Lakes. The mix of minerals identified from the spectrometer data, including serpentine, talc and carbonate, and the shape and texture of the thick bedrock layers, led to identifying possible seafloor hydrothermal deposits. The area has lava flows that post-date the disappearance of the sea. The researchers cite these as evidence that this is an area of Mars' crust with a volcanic susceptibility that also could have produced effects earlier, when the sea was present.

The new work adds to the diversity of types of wet environments for which evidence exists on Mars, including rivers, lakes, deltas, seas, hot springs, groundwater, and volcanic eruptions beneath ice.

"Ancient, deep-water hydrothermal deposits in Eridania basin represent a new category of astrobiological target on Mars," the report states. It also says, "Eridania seafloor deposits are not only of interest for Mars exploration, they represent a window into early Earth." That is because the earliest evidence of life on Earth comes from seafloor deposits of similar origin and age, but the geological record of those early-Earth environments is poorly preserved.

The Johns Hopkins University Applied Physics Laboratory, Laurel, Maryland, built and operates CRISM, one of six instruments with which MRO has been examining Mars since 2006. NASA's Jet Propulsion Laboratory, a division of Caltech in Pasadena, California, manages the project for the NASA Science Mission Directorate in Washington. Lockheed Martin Space Systems of Denver built the orbiter and supports its operations. For more about MRO, visit: