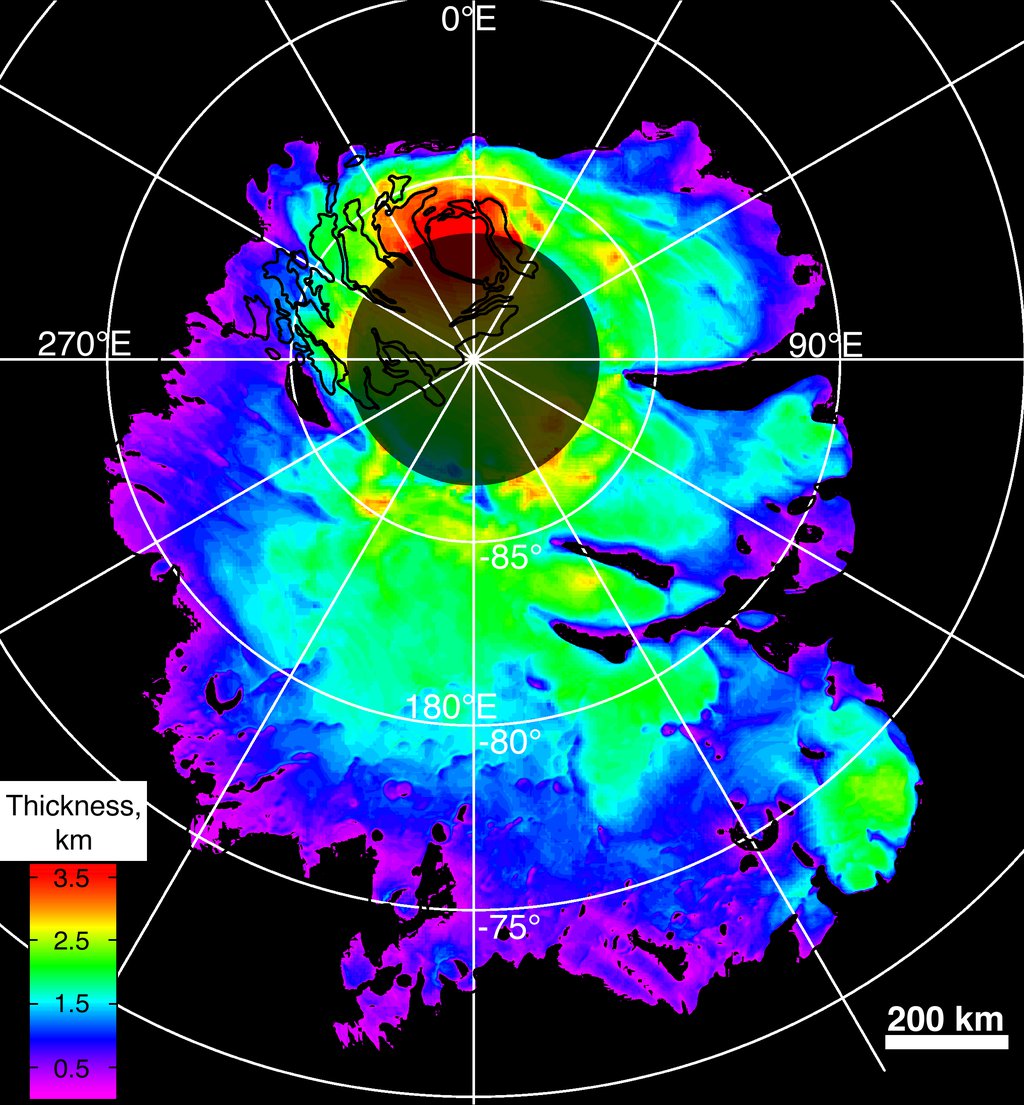 This map shows the thickness of the south polar layered deposits of Mars, an ice-rich geologic unit that was probed by the Mars Advanced Radar for Subsurface and Ionospheric Sounding (MARSIS).+ Full image and caption
Credit: NASA/JPL/ASI/ESA/Univ. of Rome/MOLA Science Team/USGS

This new estimate comes from mapping the thickness of the ice. The Mars Express orbiter's radar instrument has made more than 300 virtual slices through layered deposits covering the pole to map the ice. The radar sees through icy layers to the lower boundary, which is as deep as 3.7 kilometers (2.3 miles) below the surface.

"The south polar layered deposits of Mars cover an area bigger than Texas. The amount of water they contain has been estimated before, but never with the level of confidence this radar makes possible," said Jeffrey Plaut of NASA's Jet Propulsion Laboratory, Pasadena Calif. Plaut is co-principal investigator for the radar and lead author of a new report on these findings published in the March 15 online edition of the journal Science.

The instrument, named the Mars Advanced Radar for Subsurface and Ionospheric Sounding (MARSIS), also is mapping the thickness of similar layered deposits at the north pole of Mars.

"Our radar is doing its job extremely well," said Giovanni Picardi, a professor at the University of Rome "La Sapienza," and principal investigator for the instrument.

"MARSIS is showing itself to be a very powerful tool to probe underneath the Martian surface, and it's showing how our team's goals, such as probing the polar layered deposits, are being successfully achieved," Picardi said. "Not only is MARSIS providing us with the first-ever views of Mars subsurface at those depths, but the details we are seeing are truly amazing. We expect even greater results when we have concluded an ongoing, sophisticated fine-tuning of our data processing methods. These should enable us to understand even better the surface and subsurface composition."

Polar layered deposits hold most of the known water on modern Mars, though other areas of the planet appear to have been very wet at times in the past. Understanding the history and fate of water on Mars is a key to studying whether Mars has ever supported life, since all known life depends on liquid water.

The polar layered deposits extend beyond and beneath a polar cap of bright-white frozen carbon dioxide and water at Mars' south pole. Dust darkens many of the layers. However, the strength of the echo that the radar receives from the rocky surface underneath the layered deposits suggests the composition of the layered deposits is at least 90 percent frozen water. One area with an especially bright reflection from the base of the deposits puzzles researchers. It resembles what a thin layer of liquid water might look like to the radar instrument, but the conditions are so cold that the presence of melted water is deemed highly unlikely.

Detecting the shape of the ground surface beneath the ice deposits provides information about even deeper structures of Mars. "We didn't really know where the bottom of the deposit was," Plaut said. "Now we can see that the crust has not been depressed by the weight of the ice as it would be on the Earth. The crust and upper mantle of Mars are stiffer than the Earth's, probably because the interior of Mars is so much colder."

For information about NASA and agency programs, visit: www.nasa.gov