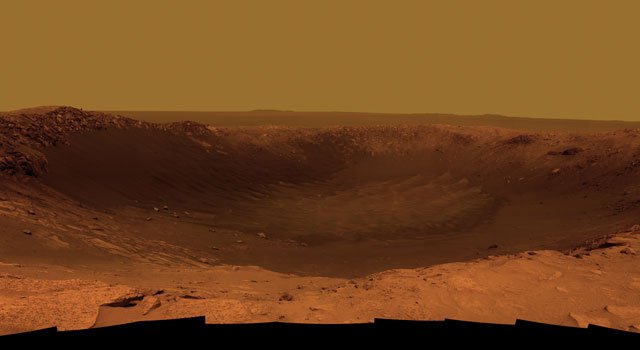 NASA's Mars Exploration Rover Opportunity is spending the seventh anniversary of its landing on Mars investigating a crater called "Santa Maria," which has a diameter about the length of a football field.Full image and caption
Credit: NASA/JPL-Caltech/Cornell/ASU

The view is presented in false color to emphasize differences among materials in the rocks and the soils.Full image and caption
Credit: NASA/JPL-Caltech/Cornell/ASU

The panorama spans 125 compass degrees, from north-northwest on the left to south-southwest on the right.Full image and caption
Credit: NASA/JPL-Caltech/Cornell/ASU

The team operating NASA's Mars rover Opportunity will temporarily suspend commanding for 16 days after the rover's seventh anniversary next week, but the rover will stay busy.

PASADENA, Calif. -- The team operating NASA's Mars rover Opportunity will temporarily suspend commanding for 16 days after the rover's seventh anniversary next week, but the rover will stay busy.

For the fourth time since Opportunity landed on Mars on Jan. 25, 2004, Universal Time (Jan. 24, Pacific Time), the planets' orbits will put Mars almost directly behind the sun from Earth's perspective.

During the days surrounding such an alignment, called a solar conjunction, the sun can disrupt radio transmissions between Earth and Mars. To avoid the chance of a command being corrupted by the sun and harming a spacecraft, NASA temporarily refrains from sending commands from Earth to Mars spacecraft in orbit and on the surface. This year, the commanding moratorium will be Jan. 27 to Feb. 11 for Opportunity, with similar periods for the Mars Reconnaissance Orbiter and Mars Odyssey orbiter.

Downlinks from Mars spacecraft will continue during the conjunction period, though at a much reduced rate. Mars-to-Earth communication does not present risk to spacecraft safety, even if transmissions are corrupted by the sun.

NASA's Mars Reconnaissance Orbiter will scale back its observations of Mars during the conjunction period due to reduced capability to download data to Earth and a limit on how much can be stored onboard.

Opportunity will continue sending data daily to the Odyssey orbiter for relay to Earth. "Overall, we expect to receive a smaller volume of daily data from Opportunity and none at all during the deepest four days of conjunction," said Alfonso Herrera, a rover mission manager at NASA's Jet Propulsion Laboratory, Pasadena, Calif.

The rover team has developed a set of commands to be sent to Opportunity in advance so that the rover can continue science activities during the command moratorium.

"The goal is to characterize the materials in an area that shows up with a mineralogical signal, as seen from orbit, that's different from anywhere else Opportunity has been," said JPL's Bruce Banerdt, project scientist for Opportunity and its rover twin, Spirit. The area is at the southeastern edge of a crater called "Santa Maria," which Opportunity approached from the west last month.

Drives last week brought Opportunity to the position where it will spend the conjunction period. From that position, the rover's robotic arm can reach an outcrop target called "Luis de Torres." The rover's Moessbauer spectrometer will be placed onto the target for several days during the conjunction to assess the types of minerals present. The instrument uses a small amount of radioactive cobalt-57 to elicit information from the target. With a half-life of less than a year, the cobalt has substantially depleted during Opportunity's seven years on Mars, so readings lasting several days are necessary now to be equivalent to much shorter readings when the mission was newer.

Opportunity will also make atmospheric measurements during the conjunction period. After conjunction, it will spend several more days investigating Santa Maria crater before resuming a long-term trek toward Endurance crater, which is about 22 kilometers (14 miles) in diameter and, at its closest edge, about 6 kilometers (4 miles) from Santa Maria.

Opportunity's drives to the southeastern edge of Santa Maria brought the total distance driven by the rover during its seventh year on Mars to 7.4 kilometers (4.6 miles), which is more than in any previous year. The rover's total odometry for its seventh anniversary is 26.7 kilometers (16.6 miles).

Opportunity and Spirit, which landed three weeks apart, successfully completed their three-month prime missions in April 2004, then began years of bonus extended missions. Both have made important discoveries about wet environments on ancient Mars that may have been favorable for supporting microbial life. Spirit's most recent communication was on March 22, 2010. On the possibility that Spirit may yet awaken from a low-power hibernation status, NASA engineers continue to listen for a signal from that rover.