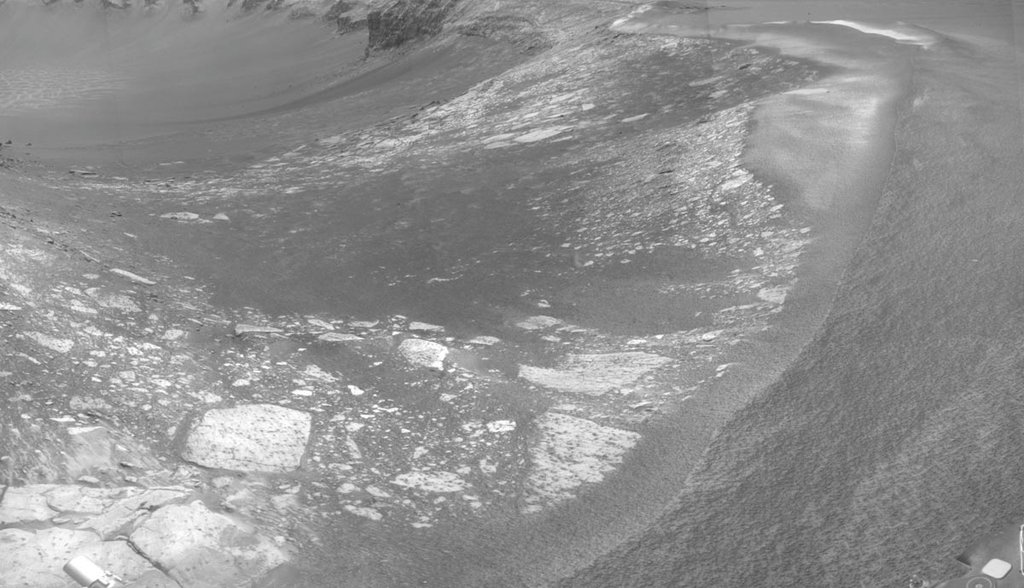 Opportunity had this view from the rim of Mars' Victoria Crater about 130 feet from where controllers intend to start the rover's descent inside the crater.

Updated Sept. 11, 2007 -- NASA's Opportunity rover completed activities on Sept. 8 and 9 as planned, so controllers sent commands instructing the rover to enter Victoria Crater today. The commands call for Opportunity to descend about 10 feet into the crater, getting all six wheels inside the rim, and then to back out and assess how much its wheels slipped on the inner slope.

Opportunity's planned descent into the giant Victoria Crater was delayed, but now the rover is preparing to drive into the 800-meter-diameter crater (half-mile-diameter) as early as Sept. 11.

"These rovers are tough. They faced dusty winds, power starvation and other challenges -- and survived. Now they are back to doing groundbreaking field work on Mars. These spacecraft are amazing," said Alan Stern, associate administrator of NASA's Science Mission Directorate, Washington.

Victoria Crater contains an exposed layer of bright rocks that may preserve evidence of interaction between the Martian atmosphere and surface from millions of years ago, when the atmosphere might have been different from today's. Victoria is the biggest crater Opportunity has visited.

Martian dust storms in July blocked so much sunlight that researchers grew concerned the rovers' daily energy supplies could plunge too low for survival. Engineers at NASA's Jet Propulsion Laboratory, Pasadena, Calif., put Opportunity onto a very low-energy regimen of no movement, few observations and reduced communication with Earth. Skies above both rovers remain dusty but have been clearing gradually since early August.

Dust from the sky has been falling onto both rovers' solar panels, impeding their ability to collect energy from the sun. However, beneficial wind gusts removed some of the new buildup from Opportunity almost as soon as it accumulated.

Opportunity drove to the lip of Victoria Crater in late August and examined possible entry routes. This week, Opportunity has been driving about 40 meters (about 130 feet) toward its planned entry point. The route will provide better access to a top priority target inside the crater: a bright band of rocks about 12 meters (about 40 feet) from the rim. "We chose a point that gives us a straight path down, instead of driving cross-slope from our current location," said Paolo Bellutta, a JPL rover driver plotting the route. "The rock surface on which Opportunity will be driving will provide good traction and control of its path into the crater."

For its first foray into the crater, Opportunity will drive just far enough to get all six wheels in; it will then back out and assess slippage on the inner slope. "Opportunity might be ready for that first 'toe dip' into the crater as early as next week," said JPL's John Callas, rover project manager. "In addition to the drives to get to the entry point, we still need to conduct checkouts of two of Opportunity's instruments before sending the rover into the crater."

The rover team plans to assess if dust has impaired use of the microscopic imager. If that tool is working, the team will use it to observe whether a scanning mirror for the miniature thermal emission spectrometer (Mini-TES) can function accurately. This mirror is high on the rover's camera mast. It reflects infrared light from the landscape to the spectrometer at the base of the mast, and it also can be positioned to close the hole in the mast as protection from dust. The last time the spectrometer was used, some aspects of the data suggested the instrument may have been viewing the inside of the mast instead of the Martian landscape.

"If the dust cover or mirror is no longer moving properly, we may have lost the ability to use that instrument on Opportunity," said Steve Squyres of Cornell University, Ithaca, N.Y., principal investigator for the rovers' science instruments. "It would be the first permanent loss of an instrument on either rover. But we'll see."

The instrument already has provided extensive valuable information about rocks and soils in the Meridiani region where Opportunity works. "Mini-TES has told us a lot about the rocks and soils at Meridiani, but we've learned that the differences among Meridiani rocks are often too subtle for it to distinguish," Squyres said. "The same instrument on Spirit, at Gusev Crater, has a much more crucial role for us at this point in the mission because there is such diversity at Gusev." Researchers will rely heavily on a different type of instrument, Opportunity's alpha particle X-ray spectrometer, for analysis of rocks at the bright-band target layer in the crater.