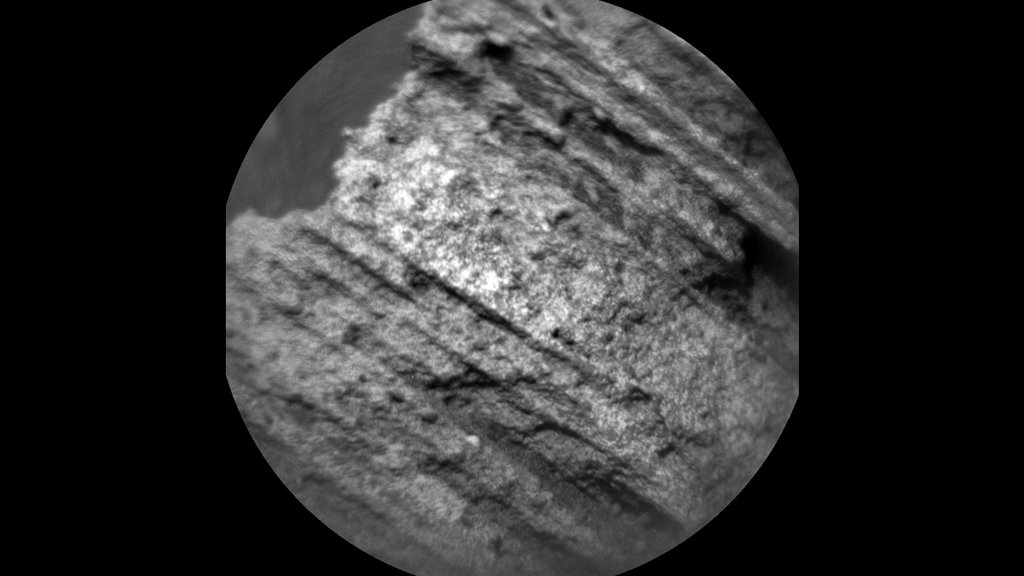 This May 15, 2015, image from the Chemistry and Camera (ChemCam) instrument on NASA's Curiosity Mars rover shows detailed texture of a rock target called "Yellowjacket" on Mars' Mount Sharp. This was the first rock target for ChemCam after checkout of restored capability for autonomous focusing.› Full image and caption
Credit: NASA/JPL-Caltech/LANL/CNES/IRAP/LPGNantes/CNRS/IAS

This instrument provides information about the chemical composition of targets by zapping them with laser pulses and taking spectrometer readings of the induced sparks. It also takes detailed images through a telescope.

Work by the instrument's team members at Los Alamos National Laboratory in New Mexico and in France has yielded an alternative auto-focus method following loss of use of a small laser that served for focusing the instrument during Curiosity's first two years on Mars.

"Without this laser rangefinder, the ChemCam instrument was somewhat blind," said Roger Wiens, ChemCam principal investigator at Los Alamos. "The main laser that creates flashes of plasma when it analyzes rocks and soils up to 25 feet [7.6 meters] from the rover was not affected, but the laser analyses only work when the telescope projecting the laser light to the target is in focus."

For the past several months, the team has coped without auto-focusing. For each target, the instrument has taken multiple images or multiple laser analyses at different focal distances. The data were sent to Earth for selection of the in-focus image or laser analysis among the set.

The repair required sending new software to be installed on the instrument. It now takes multiple images and uses those to autonomously select the focus positions for the final images and laser analyses sent back to Earth.

"We think we will actually have better quality images and analyses with this new software than the original," said Wiens.

For more about restoring auto-focus capability to ChemCam, see:

For developing ChemCam, Los Alamos partnered with researchers in France funded by the French national space agency, including the deputy principal investigator at the Research Institute in Astrophysics and Planetology, in Toulouse. For more about ChemCam, visit: