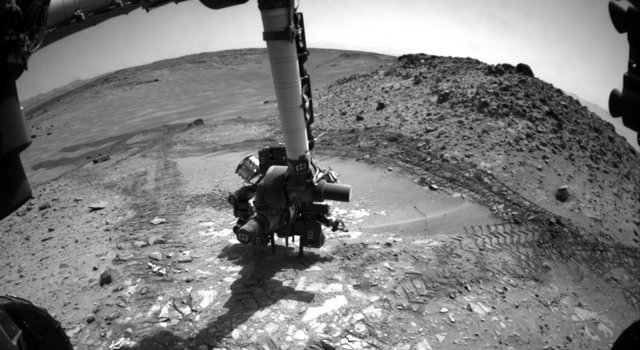 This image from the front Hazcam on NASA's Curiosity Mars rover shows the rover's drill in place during a test of whether the rock beneath it, "Bonanza King," would be an acceptable target for drilling to collect a sample. Subsequent analysis showed the rock budged during the Aug. 19, 2014, test.› Full image and caption
Credit: NASA/JPL-Caltech

The team operating NASA's Curiosity Mars rover has chosen not to proceed with drilling at a target rock called "Bonanza King" after the rock budged when tapped by the drill.

Evaluation of a pale, flat Martian rock as the potential next drilling target for NASA's Curiosity Mars rover determined that the rock was not stable enough for safe drilling.

The rock, called "Bonanza King," moved slightly during the mini-drill activity on Wednesday, at an early stage of this test, when the percussion drill impacted the rock a few times to make an indentation.

Instead of drilling that or any similar rock nearby, the team has decided that Curiosity will resume driving toward its long-term destination on the slopes of a layered mountain. It will take a route skirting the north side of a sandy-floored valley where it turned around two weeks ago.

"We have decided that the rocks under consideration for drilling, based on the tests we did, are not good candidates for drilling," said Curiosity Project Manager Jim Erickson of NASA's Jet Propulsion Laboratory, Pasadena, California. "Instead of drilling here, we will resume driving toward Mount Sharp."

After the rover team chooses a candidate drilling target, the target is subjected to several tests to check whether it meets criteria for collecting a drilled sample without undue risk to rover hardware. The mission's previous three drilling targets, all at more extensive outcrops, met those criteria.

Bonanza King is on the northeastern end of "Hidden Valley." Earlier this month, Curiosity began driving through the valley, but the rover slipped in the sand more than anticipated.

"After further analysis of the sand, Hidden Valley does not appear to be navigable with the desired degree of confidence," Erickson said. "We will use a route avoiding the worst of the sharp rocks as we drive slightly to the north of Hidden Valley."

The rover has driven about 5.5 miles (8.8 kilometers) since landing inside Gale Crater in August 2012, and has about 2 miles (3 kilometers) remaining to reach an entry point to the slopes of Mount Sharp, in the middle of the crater.

The mission made important discoveries near its landing site during its first year by finding evidence of ancient lake and river environments. The rover's findings indicated that those environments would have provided favorable conditions for microbes to live. NASA's Mars Science Laboratory Project continues to use Curiosity to assess ancient habitable environments and major changes in Martian environmental conditions. The destinations on Mount Sharp offer a series of layers that recorded different chapters in the environmental evolution of early Mars.