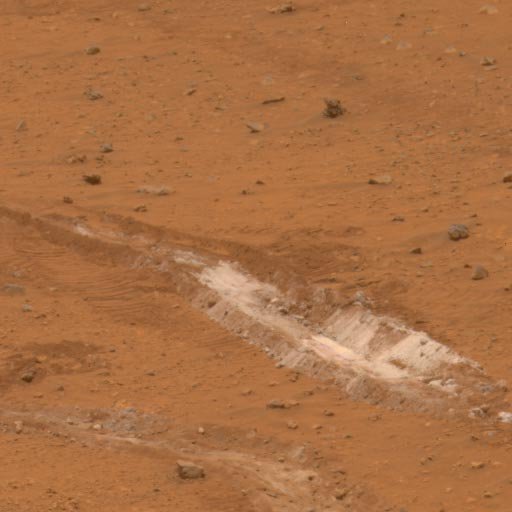 NASA's Spirit rover has found a patch of bright-toned soil so rich in silica that scientists propose water must have been involved in concentrating it.+ Full image and caption
Credit: NASA/JPL/Cornell 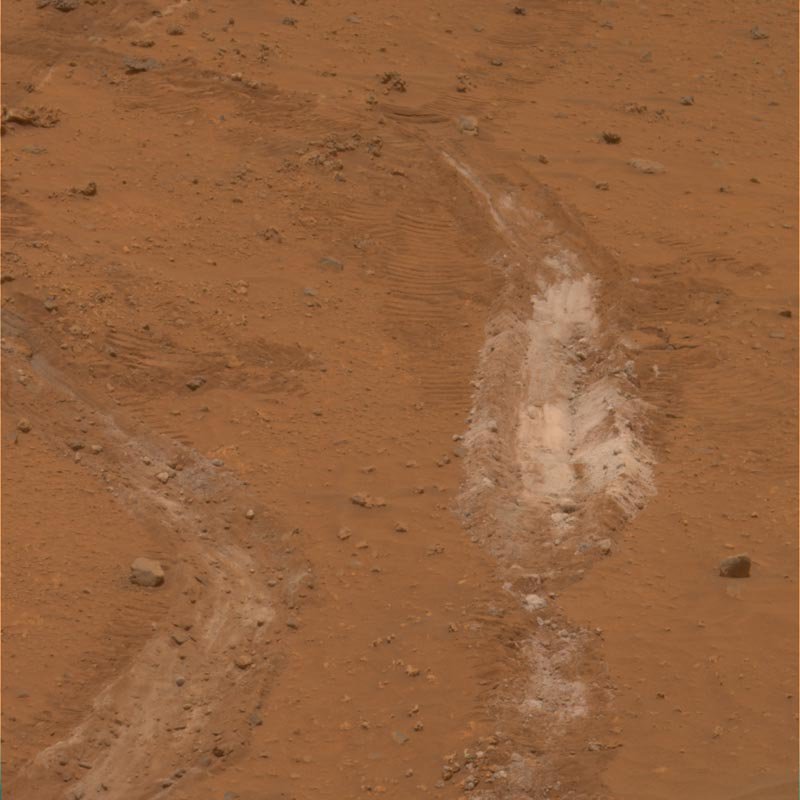 A patch of Martian soil analyzed by NASA's rover Spirit is so rich in silica that it may provide some of the strongest evidence yet that ancient Mars was much wetter than it is now.

PASADENA, Calif. - A patch of Martian soil analyzed by NASA's rover Spirit is so rich in silica that it may provide some of the strongest evidence yet that ancient Mars was much wetter than it is now. The processes that could have produced such a concentrated deposit of silica require the presence of water.

Members of the rover science team heard from a colleague during a recent teleconference that the alpha particle X-ray spectrometer, a chemical analyzer at the end of Spirit's arm, had measured a composition of about 90 percent pure silica for this soil.

"You could hear people gasp in astonishment," said Steve Squyres of Cornell University, Ithaca, N.Y., principal investigator for the Mars rovers' science instruments. "This is a remarkable discovery. And the fact that we found something this new and different after nearly 1,200 days on Mars makes it even more remarkable. It makes you wonder what else is still out there."

Spirit's miniature thermal emission spectrometer observed the patch, and Steve Ruff of Arizona State University, Tempe, noticed that its spectrum showed a high silica content. The team has laid out plans for further study of the soil patch and surrounding deposits.

Exploring a low range of hills inside a Connecticut-sized basin named Gusev Crater, Spirit had previously found other indicators of long-ago water at the site, such as patches of water-bearing, sulfur-rich soil; alteration of minerals; and evidence of explosive volcanism.

"This is some of the best evidence Spirit has found for water at Gusev," said Albert Yen, a geochemist at NASA's Jet Propulsion Laboratory, Pasadena, Calif. One possible origin for the silica could have been interaction of soil with acid vapors produced by volcanic activity in the presence of water. Another could have been from water in a hot spring environment. The latest discovery adds compelling new evidence for ancient conditions that might have been favorable for life, according to members of the rover science team.

David Des Marais, an astrobiologist at NASA's Ames Research Center, Moffett Field, Calif., said, "What's so exciting is that this could tell us about environments that have similarities to places on Earth that are clement for organisms."

Spirit and its twin rover, Opportunity, completed their original three-month prime missions in April 2004. Both are still operating, though showing signs of age. One of Spirit's six wheels no longer rotates, so it leaves a deep track as it drags through soil. That churning has exposed several patches of bright soil, leading to some of Spirit's biggest discoveries at Gusev, including this recent discovery.

Doug McCuistion, director of NASA's Mars Exploration Program, said, "This unexpected new discovery is a reminder that Spirit and Opportunity are still doing cutting-edge exploration more than three years into their extended missions. It also reinforces the fact that significant amounts of water were present in Mars' past, which continues to spur the hope that we can show that Mars was once habitable and possibly supported life."

The newly discovered patch of soil has been given the informal name "Gertrude Weise," after a player in the All-American Girls Professional Baseball League, according to Ray Arvidson of Washington University in St. Louis, deputy principal investigator for the rovers.

"We've looked at dozens of disturbed soil targets in the rover tracks, and this is the first one that shows a high silica signature," said Ruff, who last month proposed using Spirit's miniature thermal emission spectrometer to observe this soil. That instrument provides mineral composition information about targets viewed from a distance. The indications it found for silica in the overturned soil prompted a decision this month to drive Spirit close enough to touch the soil with the alpha particle X-ray spectrometer. Silica commonly occurs on Earth as the crystalline mineral quartz and is the main ingredient in window glass. The Martian silica at the Gertrude Weise patch is non-crystalline, with no detectable quartz.

Spirit worked within about 50 yards or meters of the Gertrude Weise area for more than 18 months before the discovery was made. "This discovery has driven home to me the value of in-depth, careful exploration," Squyres said. "This is a target-rich environment, and it is a good thing we didn't go hurrying through it."

Meanwhile, on the other side of the planet, Opportunity has been exploring Victoria Crater for about eight months. "Opportunity has completed the initial survey of the crater's rim and is now headed back to the area called Duck Bay, which may provide a safe path down into the crater," said John Callas, project manager for the rovers at JPL.

JPL, a division of the California Institute of Technology, Pasadena, manages the Mars Exploration Rover project for NASA's Science Mission Directorate. For images and information about the rovers, visit http://www.nasa.gov/rovers .