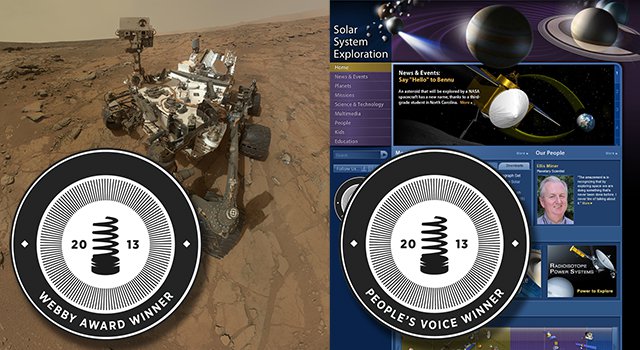 NASA's Curiosity Mars rover social media campaign and the agency's Solar System Exploration site have been recognized in the 17th Annual Webby Awards - the leading international honor for the best of the Internet.
Credit: NASA/JPL-Caltech

The International Academy of Digital Arts and Sciences presents the Webby Awards. This year, the academy added categories for work in social Web; Curiosity's wins are two of the first in these categories. The Solar System Exploration site win in government keeps up a five-year streak for NASA in that category.

"NASA's Solar System Exploration site is the leading source of planet information, attracting 8 million unique visitors per year," said Alice Wessen, the manager of the website from NASA's Jet Propulsion Laboratory, Pasadena, Calif. "Many of our 30 million annual page views are from students seeking information on the planets for their schoolwork. We even have a section dedicated to homework help."

Visiting a NASA website is just one way to get information from the agency.

"We also engage the public in the social networks where they spend the most time," said Veronica McGregor, JPL's news manager and lead for the Curiosity social media campaign. "Through Facebook, Twitter and Reddit, we speak with millions. The public was invited to watch the rover's construction, launch, landing and news briefings live on Ustream.tv, and participate in real-time chats with each other and mission experts.

Members of The International Academy of Digital Arts and Sciences select winners for the Webby Awards. A popular vote conducted online determines the winners of the People's Voice Awards.

Winners were announced online on April 30. Trophies will be awarded on May 21 at a ceremony in New York.

For more information about the Webby Awards, including the full list of winners, nominees and honorees, visit: http://www.webbyawards.com/ .

JPL, a division of the California Institute of Technology in Pasadena, manages the Mars Science Laboratory and its Curiosity rover for NASA's Science Mission Directorate, Washington.