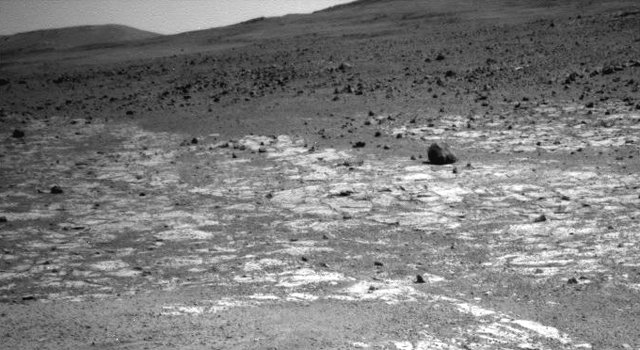 This view from NASA's Mars Exploration Rover Opportunity shows an area where a pale-toned geological unit called the "Burns Foundation," in the foreground, abuts a different geological unit. The darker unit, believed to be older, marks the edge of "Solander Point," a raised segment of the western rim of Endeavour Crater.› Full image and caption
Credit: NASA/JPL-Caltech 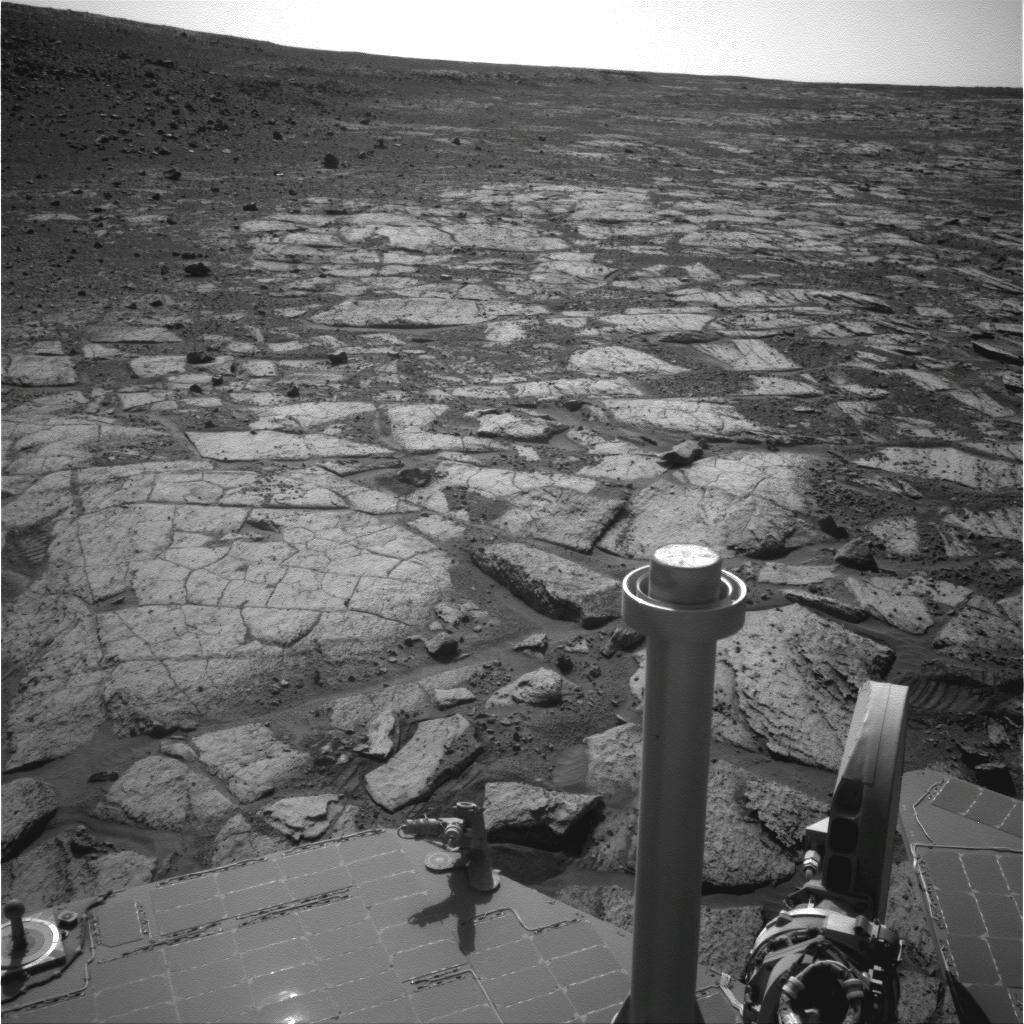 NASA's Mars rover Opportunity is studying the area of contact between a two rock layers that record environmental conditions from different times in the past.

PASADENA, Calif. - NASA's Mars rover Opportunity is studying the area of contact between a rock layer formed in acidic wet conditions long ago and an even older one that may be from a more neutral wet environment.

This geological contact line recording a change in environmental conditions billions of years ago lies at the foot of a north-facing slope, "Solander Point," that the rover's operators chose months ago as Opportunity's work area for the coming Martian southern hemisphere winter.

Opportunity has survived five Martian winters since it landed on Mars in January 2004. A northern slope would tilt the rover's solar panels toward the winter sun, providing an important boost in available power.

Three months ago, the mission began a trek of about 1.5 miles (2.4 kilometers) from an area where Opportunity worked for nearly two years, on "Cape York," to reach Solander Point for the winter.

"We made it," said Opportunity's project scientist, Matt Golombek of NASA's Jet Propulsion Laboratory, Pasadena, Calif. "The drives went well, and Opportunity is right next to Solander Point. We know we could be on that north-facing slope with a one-day drive, but we don't need to go there yet. We have time to investigate the contact between the two geological units around the base of Solander Point. Geologists love contacts."

Both Cape York and Solander Point are raised segments of the western rim of Endeavour Crater, which is about 14 miles (22 kilometers) in diameter. Between these two raised segments, the ground surface is part of a geological unit called the Burns Formation, which also includes virtually all the rocks Opportunity studied from its landing site in Eagle Crater until its arrival at Cape York two years ago. The Burns Formation includes sulfate-bearing minerals that are evidence of an ancient environment containing sulfuric acid.

The geological contact that Opportunity is now investigating is where Burns Formation rocks border older rocks uplifted by the impact that formed Endeavour Crater. From observations by Mars orbiters and from Opportunity's work on Cape York, researchers suspect these older rocks may contain minerals that formed under wet conditions that were not as acidic.

The rover is also observing some loose rocks that may have rolled off Solander Point, providing a preview of what Opportunity may find after it climbs onto that rim segment.

Based on an analysis of the amount of dust accumulated on the rover's solar panels, the team plans to get Opportunity onto the north-facing slope before mid-December. Daily sunshine for the rover will reach a winter minimum in February 2014. The team expects to keep the rover mobile through the winter. Solander Point offers rock outcrops for the rover to continue studying through the winter months.

The twin rovers of NASA's Mars Exploration Rover Project, Opportunity and Spirit, both completed three-month prime missions in April 2004 and began years of bonus, extended missions. Both found evidence of wet environments on ancient Mars. Spirit ceased operations during its fourth Martian winter, in 2010. Opportunity shows symptoms of aging, such as loss of motion in some joints, but continues to accomplish groundbreaking exploration and science.